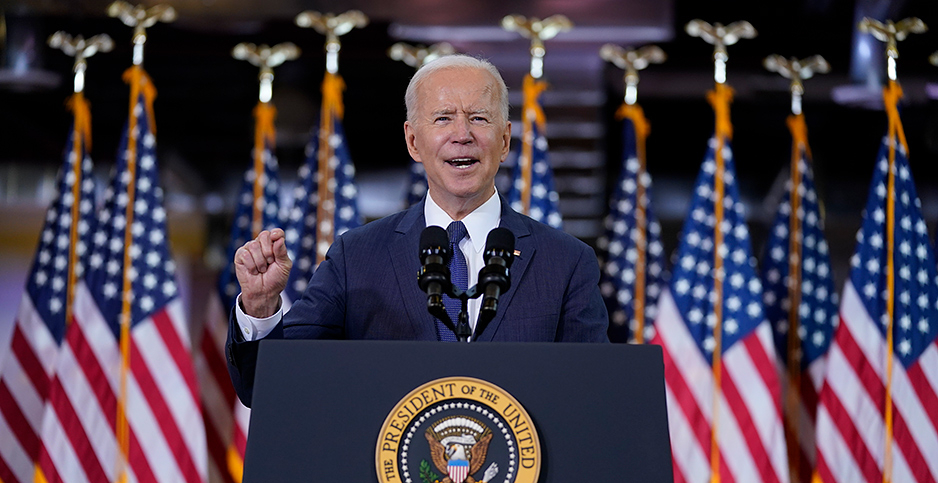 President Biden outlined his vision for generational investments in clean energy, water and transportation infrastructure yesterday, pitching it as an opportunity to fight climate change and remake the American middle class.

The "American Jobs Plan," which proposes more than $2 trillion in spending paired with tax hikes for corporations and the wealthiest Americans, would "lead to a transformational progress in our efforts to tackle climate change," Biden said in a speech at a carpenters training facility in Pittsburgh.

"It’s not a plan that tinkers around the edges," Biden said. "It’s a once-in-a-generation investment in America, unlike anything we’ve seen or done since we built the Interstate Highway System and the space race decades ago."

The plan is the first of two broad stimulus proposals expected from the White House.

Biden emphasized the union and working-class constituencies he appealed to on the campaign trail, laying out a framework to create jobs replacing lead pipes, installing clean energy and massively building out electric vehicle charging infrastructure.

The plan’s proposed network of 500,000 EV chargers would create "good-paying jobs" and allow the United States to lead the world in "the manufacturing and export of clean electric cars and trucks," Biden said.

The address yesterday afternoon offered a grand vision, but there are significant obstacles in sight for what would be a historically large spending program and by far the most ambitious climate policy ever enacted by the federal government.

The plan, while light on details, would seek to massively boost clean energy via expansions of key renewable tax credits and a federal clean electricity standard, ideas that have already gotten a cold shoulder from congressional Republicans.

Overall, it proposes $621 billion for transportation infrastructure and $580 billion for domestic research and development and manufacturing expansions, including massive expansions of clean energy R&D, to reach a direct spending top line of $2.25 trillion (E&E Daily, March 31).

But particularly sticky are the plan’s tax provisions, which would scrap the user-fee model that has traditionally paid for roads, highways and bridges in favor of a larger-scale overhaul of the federal tax code.

“They know China and other countries are eating our lunch. There’s no reason why it can’t be bipartisan.”

It would eliminate subsidies and tax incentives for fossil fuel companies — currently worth some $20 billion annually — and raise the corporate tax rate from 21% to 28%, among other changes that would roll back the 2017 tax cut bill.

Republicans are already bashing the idea, but Biden pledged that no American making under $400,000 annually would see a federal tax increase. The corporate tax increase alone, he said, would generate $1 trillion over 15 years.

"This is not to target those who made it and not to seek retribution. This is about opening opportunities for everybody else," Biden said. "Here’s the truth: We all will do better when we all do well."

Ambition, Biden said, should not preclude bipartisanship. "I don’t think you’ll find a Republican today in the House or Senate — maybe I’m wrong, gentleman — who doesn’t think we have to improve our infrastructure," Biden said.

"They know China and other countries are eating our lunch," said the president. "There’s no reason why it can’t be bipartisan."

But Senate Minority Leader Mitch McConnell (R-Ky.) dismissed that assessment yesterday, calling the plan "a Trojan horse for the largest set of tax hikes in a generation." "There would be bipartisan support for a smart proposal," McConnell said in a statement.

It remains to be seen how the details of Biden’s plan will gel with the legislative process and existing ideas on Capitol Hill.

Many of the proposals to boost clean energy and research — and nix fossil fuel subsidies — are plucked directly from Democratic legislation (see related story).

That includes the clean electricity standard, which would aim to achieve 100% clean energy by 2035, mirroring both Biden’s campaign pledge and the "Clean FUTURE Act," H.R. 1512, the climate bill introduced last month by House Energy and Commerce Democrats.

Democratic committee leaders also cheered the plan yesterday and offered visions for how it fits into their own ongoing efforts on infrastructure and clean energy.

"In announcing this plan, President Biden has taken the conversations that I’ve had with him, Vice President [Kamala] Harris, and [Transportation] Secretary [Pete] Buttigieg, and he’s put those words into action," House Transportation and Infrastructure Chair Peter DeFazio (D-Ore.) said in a statement.

There are lingering questions, however, about process, particularly surrounding budget reconciliation, the tool that allows certain spending legislation to bypass the Senate filibuster and pass with a simple majority.

Traditionally, the five-year transportation infrastructure bill, which Congress is pushing to reauthorize before it expires at the end of September, is bipartisan and contains policy provisions that would not make it through the so-called Byrd rule that controls reconciliation in the Senate.

With Republicans gearing up to oppose Biden’s plan, much of the spending would likely have to move through reconciliation.

But it’s not clear whether the reauthorization bill could get wrapped into negotiations or whether the plan would layer on some $600 billion in additional transportation funding.

"As my Committee continues its work to pass our surface transportation reauthorization legislation this spring, I’m excited to have a partner in the White House with a robust plan to move our infrastructure into the 21st century," DeFazio said.

Biden’s forthcoming budget proposal could shed additional light on that as well, but both leaders of the Senate Environment and Public Works Committee said yesterday they are looking for bipartisanship.

"I’ll continue to help lead the effort in Congress to advance bipartisan legislation that is needed to help our communities, our economy, and our planet," EPW Chairman Tom Carper (D-Del.) said in a statement yesterday.

"Just last week, our committee unanimously reported legislation to rebuild our nation’s water systems," she said in a statement. "This proves that infrastructure can and should be done on a bipartisan basis."

Democrats are hoping to avoid the fate of President Trump’s 2018 infrastructure plan — a similarly ambitious outline to overhaul environmental permitting and leverage private investment that earned plaudits from his party but ultimately fell flat.

While the Trump administration struggled to get GOP leadership to move its proposals and find pay-fors, Democrats could face a different set of intraparty challenges.

Progressives are already eager for even more ambitious spending, and a number of groups set out yesterday to pick apart Biden’s plan, calling for $1 trillion in annual spending and more specific cuts to carbon emissions.

The Sunrise Movement yesterday offered a lukewarm endorsement of Biden’s plan as a "start," while pledging to continue to push for $1 trillion in annual spending to transform the economy.

"The priorities and approach are right — this contains the frameworks of the Green New Deal — but as of now this plan could only be considered a beginning of that truly transformative vision," said Sunrise’s Executive Director Varshini Prakash.

"But we’ve always said that the Green New Deal wouldn’t be just one bill," said Prakash, "and the only thing worse than not meeting this moment at scale would be not meeting it at all."

With the White House planning to release a second proposal focused on health care, child care and education in the coming weeks, Sunrise said it will look to that proposal to include more provisions "that are even more responsive to the scale and urgency of our economic crises, as well as what science and justice demand."

Republicans, as they have for weeks, warned against policy and spending items unrelated to conventional transportation infrastructure, a rallying cry that’s likely to intensify as debate moves forward.

House Transportation and Infrastructure Committee ranking member Sam Graves (R-Mo.) said most of the president’s plan "goes to a wide array of initiatives that would be better considered through thoughtfully crafted, more targeted measures — not lumped together in a massive package that throws taxpayers under the bus with the biggest tax hikes we’ve seen in decades."

"Thankfully, it’s Congress’ job to write legislation and not the Administration’s," Graves said in a statement.

Other top Republicans offered a hodgepodge of critical statements, focusing particularly on the tax hikes and the Green New Deal, suggesting little realistic path for the kind of large-scale vision Biden offered yesterday.

“This proposal starts with the punishing policies of the Green New Deal and builds back worse from there.”

"This proposal starts with the punishing policies of the Green New Deal and builds back worse from there," Barrasso said in a statement. "It will hike taxes and spend trillions of dollars on the left’s radical agenda."

But Biden nonetheless painted an optimistic picture of bipartisanship, pointing to infrastructure successes in the past and promising to invite the GOP to the Oval Office. He framed investments in infrastructure and research as part of a larger global question about the future of democracy.

"There’s a lot of autocrats in the world who think the reason why they’re going to win is democracies can’t reach consensus any longer; autocracies do. That’s what competition between America and China and the rest of the world is all about," Biden said.

"It’s a basic question: Can democracies still deliver for their people? Can they get a majority? I believe we can."