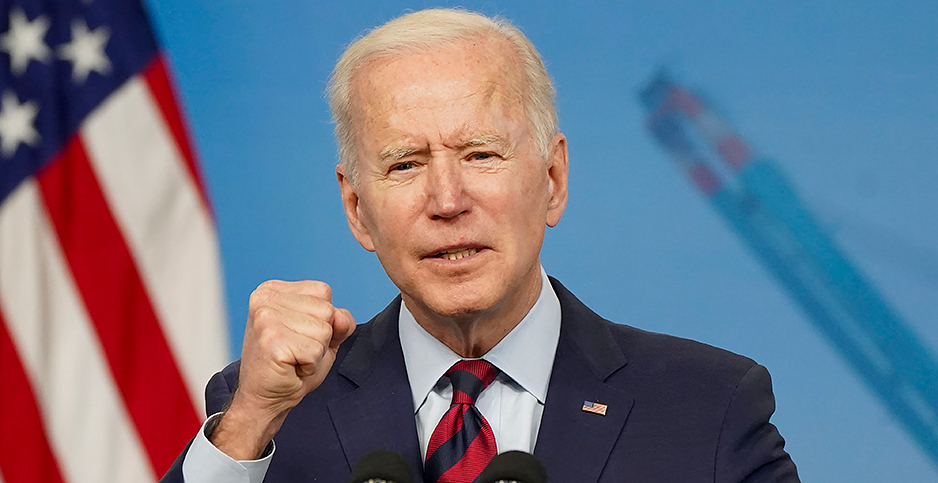 The Biden administration is preparing to throw its weight behind international efforts to alleviate climate risks that threaten the stability of the global financial system.

The move, which is expected to come soon in the form of an executive order, is the latest sign that the administration will seek to mitigate climate-related financial risks as a pillar of its carbon policies.

"The directive from the top is clear," said Rachel Kyte, a former vice president and special climate envoy at the World Bank Group. "There’s no plausible deniability [anymore]. You can’t be a financial actor out there and say that you’re not really clear where the administration stands on these things."

Details about the structure, scope and timing of the executive order are still emerging.

But White House climate envoy John Kerry said on Wednesday that President Biden is "poised to issue an executive order" that will require companies to be more transparent about the threats they face from climate change.

"It’s going to change allocation of capital," Kerry said. "Suddenly people are going to be making evaluations considering long-term risk to the investment based on the climate crisis."

That’s not all. The president also reportedly plans to direct top administration officials to develop a governmentwide strategy to mitigate climate-related financial risks to public and private financial assets, according to a draft of the executive order reviewed by Bloomberg.

That plan — which would be crafted by National Economic Council Director Brian Deese, national climate adviser Gina McCarthy, Treasury Secretary Janet Yellen, and the Office of Management and Budget — would be due within 120 days.

The president is expected to direct Yellen to collaborate with top financial regulators to issue a separate report within six months that outlines the regulatory community’s efforts to assess — and address — climate risks. According to Bloomberg, she would do so as chair of the Financial Stability Oversight Council, or FSOC, a body created in the aftermath of the financial crisis of 2008.

Yellen held her initial meeting with FSOC just last week. Climate change was on the agenda for the first time in the council’s decadelong history (Climatewire, April 1).

The White House and State Department did not respond to questions about the timing or scope of the executive order.

But sources say the move has been in the works for weeks and will likely be rolled out before or alongside the administration’s climate summit on April 22 and 23.

The White House has invited 40 world leaders to attend the virtual event, where it is expected to unveil a range of new climate goals, potentially including halving U.S. emissions by 2030.

"The fact that this issue is going to get its own executive order really elevates the topic, emphasizes the administration’s priorities here and creates some wind at the sales for action both at the Financial Stability Oversight Council but also at the primary regulators," Gelzinis said.

Kyte, who is currently dean of the Fletcher School at Tufts University, agreed. She said the executive order would signal "to every corner of the financial marketplace" that the U.S. is serious about addressing the relationship between rising temperatures and economic stability.

"There’s no ideological dispute as to the fact that we need to protect the financial system so it can operate in a world where carbon is no longer powering the economy," she said.

The expected move by the White House follows financial agencies in the U.S. and elsewhere that have already taken steps to address the issue.

The Commodity Futures Trading Commission and the Federal Reserve have both launched internal initiatives to zero in on the ways that rising temperatures — and environmental regulation — could impact the firms and markets they oversee.

The Securities and Exchange Commission has gone even further. Under the leadership of acting Chair Allison Herren Lee, the regulator has made a flurry of moves to begin pushing securities markets to more accurately account for global warming. That includes kick-starting a review of the rules that dictate what climate-related information companies are required to disclose to investors and the public.

Sustainable finance proponents have welcomed those efforts. But they’ve also called on the administration — with Yellen at the helm — to do everything it can to streamline, coordinate and accelerate the efforts of independent regulators, which don’t take direct orders from the president.

Gelzinis is among them. "The White House has such an important bully pulpit, that setting a path here can really have a broader impact" beyond immediate steps outlined in the expected executive order, he said.

Multiple sources interviewed for this story emphasized that it’s still early in the process. The executive order and subsequent reports from top officials will be far more revealing of the government’s trajectory on the issue that, until recently, was largely ignored by the U.S. financial regulatory system.

"We’re in the first half of the first inning," said Tyler Gellasch, a former SEC aide and current fellow at Duke University’s Global Financial Markets Center.

Even so, he said, Biden has been clear from the beginning that curbing climate change would require "moving private market forces to doing more, and more quickly."

That could be done in a slew of ways, from requiring finance firms to be more transparent about their exposure to climate risks, to regulating what risks they do or don’t carry on their balance sheets, to overseeing what types of business activities they finance and how.

Ultimately, Gellasch said, "the financial regulators are the ones who set the terms for capitalism. And if we think we are going to have to address climate change, then capitalism has to be working in the favor of addressing climate change."

Climate advocates, meanwhile, have urged the administration to ensure it addresses the financial system’s contributions to global warming — not just its vulnerabilities.

"Any climate finance approach from the Biden administration must actively drive decarbonization of the financial system, not leave capital allocation up to the market," said Moira Birss, a finance campaigner at Amazon Watch.