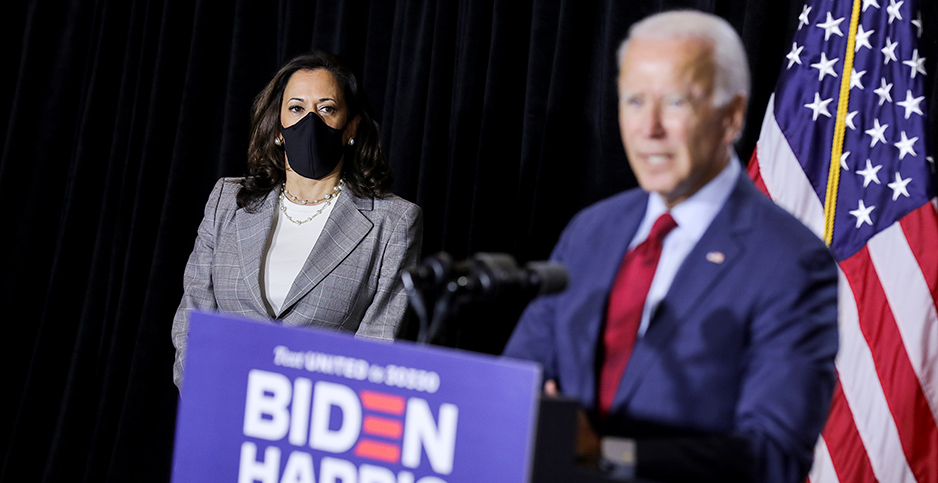 Climate litigation could be on the verge of a sea change if presumptive Democratic nominee Joe Biden wins his bid for the presidency this fall.

The former vice president and his running mate, California Sen. Kamala Harris, have both expressed support for holding oil and gas firms liable for climate change, and legal experts say they would expect notable changes in the way lawsuits over warming-induced sea-level rise and strengthening storms — at both the state and federal levels — are handled if the Democrats clinch the White House.

"On how the government interacts on climate and participates in the climate discussion, I think you will see a major shift," said Hana Vizcarra, a staff attorney at Harvard Law School’s Environmental & Energy Law Program. "These are both candidates who have committed to take action."

In his latest climate plan, Biden said he would encourage environmental enforcement in the courtroom by taking actions such as forming an Environmental and Climate Justice Division within the Justice Department, as proposed by Washington Gov. Jay Inslee (D), who ran against Biden in the primary.

During her own presidential campaign last fall, Harris claimed that she has sued Exxon Mobil Corp. Though she never went through with a lawsuit against the oil firm, she did spearhead an investigation into Exxon’s climate risk disclosures (Climatewire, Sept. 16, 2019).

"And maybe this is the prosecutor in me," Harris, California’s former attorney general, said at a CNN climate town hall last year. "They have to be held accountable. These are bad behaviors; they are causing harm and death in communities."

The Trump administration has demonstrated repeated willingness to intervene on behalf of embattled oil and gas companies in court, but a more climate-friendly president could lend support to U.S. states, counties and cities looking to hold oil supermajors financially accountable for the effects of global warming.

Even a lack of involvement by a potential Biden administration could pack a punch, said University of Denver law professor Wyatt Sassman.

"A federal government that doesn’t stand in the way of letting some of these cases … take their regular course could be an impactful change in and of itself," he noted.

Climate damages lawsuits have been mired in procedural battles over whether the cases belong in state or federal court. Industry attorneys have pushed to move the challenges to federal benches, where a judge could find that the municipalities’ claims are preempted by the Clean Air Act.

Under the Trump administration, DOJ has echoed those calls.

If Biden is elected president, his administration may choose to file briefs backing claims by U.S. localities in search of compensation for climate impacts.

Support from a Biden DOJ would "do a lot to give these suits more momentum," said Loyola University New Orleans law professor Karen Sokol.

"To the extent that a new administration is able to make concerted efforts to address climate change, either through executive agency actions or, if the makeup of Congress allows, through endorsement of legislative action, it seems possible that preemption arguments could make a resurgence," she wrote in an email.

University of Hawaii, Mānoa, law professor Maxine Burkett said she expects a Biden administration would have limited influence over the outcome of climate damages lawsuits.

"These are state and local cases and claims based on state common law, as plaintiffs have maintained," she said in an email. "So, changes in the course and content of the litigation resulting from changes at the federal level are harder to envision."

A potential Biden administration could also turn back the clock on Trump’s efforts to shrink the scope of agency powers under key environmental statutes, which have spurred mountains of lawsuits.

In defense of its Affordable Clean Energy rule for power plants, for instance, Trump’s EPA argued that its regulation, which gutted the Obama-era Clean Power Plan, was justified because the earlier rule exceeded the agency’s authority under the Clean Air Act.

Harvard’s Vizcarra said there’s room for a Biden administration to broaden the scope of agency oversight of emissions.

"That is another area where you will certainly see a shift," she said. "And that will impact how litigation over the rulemakings will go. It will impact probably how they prioritize what rules to address first as far as reconsidering actions under this administration."

But new rulemaking is a long and technical process, and if Biden, who turns 78 in November, only serves a single term, that could hinder his administration’s efforts to unwind a lengthy list of Trump-era rollbacks, Vizcarra added.

"These are very technical rules that demand a lot of development and scientific support … so to see all of that through, especially on major rules, that can be hard to do in a single term," she said.

Both Biden and Harris have both supported efforts to invigorate environmental justice battles in the courts and could be expected to continue those efforts in the White House, legal experts say.

Harris has led and Biden has voiced his support for legislation that would overturn the Supreme Court’s decision in Alexander v. Sandoval, which set a higher bar for lawsuits under Title VI of the Civil Rights Act.

Joined by Sens. Cory Booker (D-N.J.) and Tammy Duckworth (D-Ill.), Harris proposed in the recent "Environmental Justice for All Act" that Congress overturn the ruling, making it easier to sue companies for pollution that has disparate impacts for minority and low-income communities, rather than having to demonstrate intentional discrimination (Climatewire, Aug. 10).

Biden’s choice of Harris as his running mate could be seen as an additional layer of strategic support for lawsuits brought by communities seeking to hold industries accountable for pollution, said Sokol of Loyola.

Harris’ push for environmental justice follows this summer’s widespread protests over racial inequity and police brutality. Despite her advocacy for progressive policies, Harris has faced criticism for her record as a public prosecutor, including her opposition to California legislation that would have required her office to investigate fatal police shootings.

"I think she’s really seizing this moment to talk about environmental racism and thinking of it as something that needs to be prosecuted in the same way we think of other forms of racism getting prosecuted," Sokol said.

"That could put momentum behind this whole idea of holding certain actors accountable — whether it’s the government or the industry."