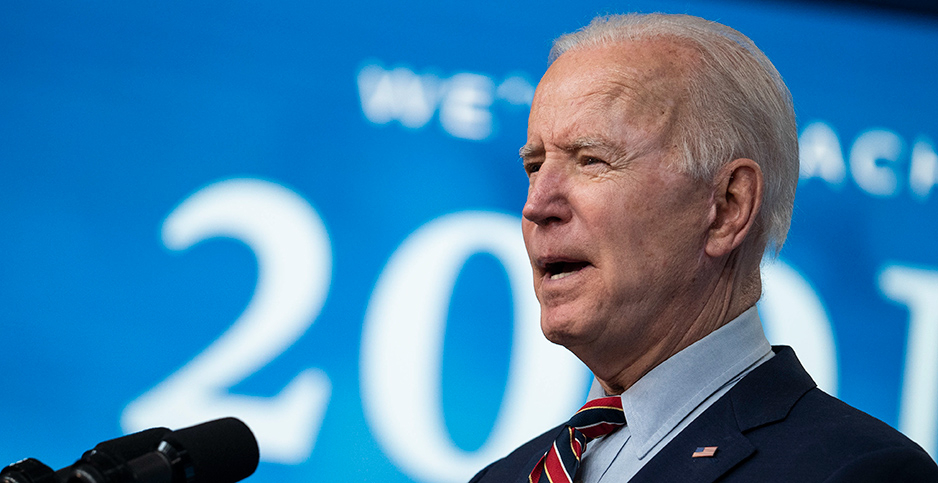 President Biden committed the U.S. to cutting emissions 50-52% by 2030 compared to 2005 levels. Sarah Silbiger/Pool via CNP/SplashNews/Newscom

President Biden will announce today that the United States is committing to cut carbon emissions in half within the decade, a White House official told reporters last night.

Biden’s goal to reduce greenhouse gases 50-52% by 2030 comes as he hosts a virtual climate summit for 40 world leaders today and tomorrow. His announcement is meant to persuade other countries to strengthen their own carbon goals as the world lurches toward a future of intensifying climate effects like heat waves, droughts and stronger storms.

The carbon goal shatters previous climate promises from former President Obama and is seen as a precursor to Biden’s pledge of reaching net-zero emissions in 2050.

"We’re making the case that the countries that are enhancing their ambition are doing so in a way that is going to allow them to get on track by 2050, and I think that’s the bar that we’re setting and that we’re seeing our allies to step up and meet," the White House official said.

The Biden administration is counting on other countries to take the U.S. pledge seriously after former President Trump withdrew from the Paris Agreement and openly embraced climate denial.

The opportunity for climate action has changed significantly since the Obama administration introduced its climate policy, and even since Trump rolled back much of it. Clean energy technology like solar panels and battery storage is significantly cheaper than it was a decade ago.

The U.S. is also pursuing new forms of climate policy that relies less on federal leadership and is driven more by businesses, states and the public, the official said.

"We’re standing here with better field position today than we had four years ago, than we had 10 years ago, and it’s because of technology improvements, but it’s also because a bunch of folks in cities and states, in businesses, our workers, they saw the economic opportunity, the big economic opportunity to create the jobs tackling the climate crisis, and they’ve been chasing after it," the official said.

The Biden administration will highlight executive orders and the administration’s $2.3 trillion infrastructure proposal as pillars of its plan to wean the country off fossil fuels. Biden will reiterate that the U.S. views climate policy as an opportunity to put people to work making electric vehicles, building out a grid powered by clean energy and by cleaning up pollution caused by fossil fuel development.

The climate goal, known as a nationally determined contribution to the Paris Agreement, was crafted with labor unions as well as "groups representing thousands of scientists; hundreds of governmental leaders like governors, mayors, and tribal leaders; hundreds of businesses; hundreds of schools and institutions of higher education; as well as with many specialized researchers focused on questions of pollution reduction," according to a fact sheet distributed by the White House.

To reach Biden’s climate goals, the U.S. will remove CO2 from industrial sectors like cement through carbon capture, and it will produce green hydrogen from renewable energy, nuclear energy or waste to power, the fact sheet said.

The administration will also tackle other greenhouse gases such as methane and hydrofluorocarbons. It will increase reliance on nature-based solutions to climate change, such as carbon sinks on public lands and in the oceans.

Other countries are expected to announce significant updates to their 2030 goals either at today’s summit or leading up to the international climate talks in Scotland this fall.

The new U.S. target will be among the most aggressive in the world. It puts the U.S. among the top four countries in terms of climate ambition, according to a recent analysis by the Rhodium Group.

Still, the U.S. goal is significantly weaker than the United Kingdom’s, which has proposed reducing emissions 78% compared to 2005 levels by 2035. By contrast, the European Union and Switzerland have targets of 51% by 2030. Other large economies are far behind, including Canada at 30%, Australia at 26-28% and Japan at 24%, the Rhodium Group found.

Advocates praised the move as a meaningful step toward protecting the U.S. from the effects of climate change.

"This pledge demonstrates the Administration’s commitment to our health and future," Mona Sarfaty, director of the Medical Society Consortium on Climate and Health, said in a statement. "As doctors and health professionals, we have waited for this aggressive commitment because we see the ways climate change harms our patients, from asthma to heat-related illness to injuries from dangerous weather events to worsening chronic conditions."