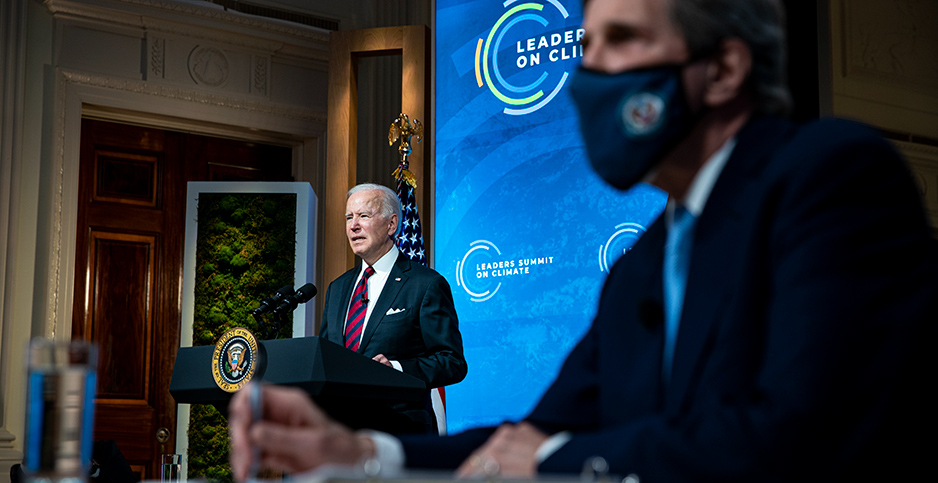 President Biden used his first international conference to show world leaders that the United States has significant new climate ambitions and pressed other countries to go beyond their current plans.

"We have to move. We have to move quickly," Biden said at the kickoff to the two-day summit with 40 other countries that produce about 80% of the world’s greenhouse gas emissions.

For some of the world’s biggest emitters, it worked.

Canada, Japan and the United Kingdom all ramped up plans to decarbonize their economy by setting more rapid timelines. Quicker carbon cuts will accelerate cuts in greenhouse gas emissions among some of the world’s biggest emitters and transition the world away from coal and toward more clean energy options.

"It’s vital for all of us to show that this is not some expensive, politically correct green act of bunny-hugging," British Prime Minister Boris Johnson said.

Biden announced that by 2030, the United States will cut its emissions by 50% to 52% from 2005 levels. That would put the United States on a more rapid timeline to cut greenhouse gas emissions than the pledges of the Paris climate agreement by doubling its ambitions to phase out fossil fuels from the economy.

To get there, the United States must phase out coal-fired power plants more quickly, oversee an unprecedented increase in electric vehicles, and create a power grid more reliant on wind and solar.

Japanese Prime Minister Yoshihide Suga pledged a 46% emissions cut by 2030 compared with 2013 levels, a significant increase from its previous target of a 26% reduction.

"We will continually strengthen our plan and take even more actions on our journey to net zero by 2050," Trudeau said.

Many world leaders said they were happy to once again have the United States back in the fight against global warming.

"It is so good to have the U.S. back on our side in the fight against climate change," European Commission President Ursula von der Leyen said.

German Chancellor Angela Merkel said the pledges at the summit were "nothing short of a complete transformation, a complete change of the way we do business."

"I’m delighted to see that the United States is back to work together with us in climate politics, because there can be no doubt about the world needing your contribution," Merkel said.

Merkel did not reference her country’s plans to increase its reliance on natural gas, which will happen in a few months with completion of Nord Stream 2 pipeline construction. The pipeline, which has been opposed by both Biden and former President Trump, will bring more Russian gas into Germany as well as the rest of Europe.

Much of the drop in U.S. emissions over the last 15 years has been due to the increased reliance on natural gas and reduction of coal power on the electrical grid. Biden’s plan hopes to take on the harder task of decarbonizing the electric grid. To meet the goal of cutting carbon emissions by 50% to 52% by the end of the decade, the United States will need to undertake the much more difficult task of significantly ramping up the amount of clean energy on the grid to reduce emissions and to incentivize a major increase in the reliance on electric vehicles.

Some of the world’s major emitters — including Russia, Brazil and Australia — did not promise major new pledges.

Chinese President Xi Jinping did not make any new pledges even as China is in a building boom of coal-fired power plants.

Instead, Xi said China would "strive to peak carbon dioxide emissions before 2030 and achieve carbon neutrality before 2060." Xi did, for the first time, say China would "strictly limit" the use of coal and noted that coal use in his country would start declining after 2025.

Brazilian President Jair Bolsonaro, who has overseen a dramatic increase in the deforestation of the Amazon, shifted the blame for global warming to the world’s other major economies and said his country accounts for 3% of global emissions. He also said that his country will do more but that it needs funding from other countries to do so.

"There must be fair payment for environmental services provided by our biomes to the planet at large as a way to recognize the economic nature of environmental conservation activities," he said.

Republicans have said that Biden’s pledges would hurt American jobs and benefit other countries, especially China, that are not making bolder promises.

Some environmental advocacy groups criticized the Biden administration for not promising a bigger carbon cut.

Jean Su, energy justice director at the Center for Biological Diversity, said the United States must cut emissions by at least 70% because it is one of the world’s largest emitters.

"A pledge to cut emissions 50% by 2030 simply isn’t big enough to meet the massive scale of the climate emergency," she said in a statement. "Solving the climate crisis requires applying both science and equity."