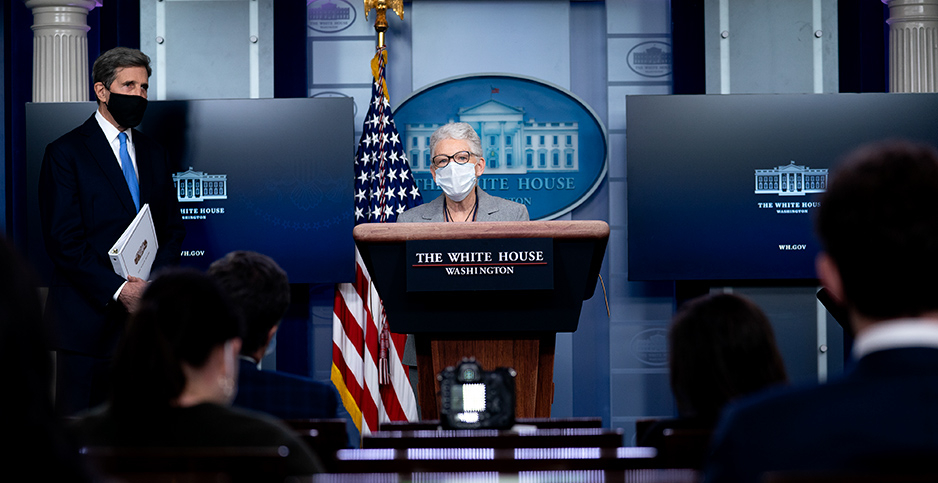 President Biden today proposed spending on climate change across the entire government with most agencies getting cash for adapting to rising temperatures and slashing greenhouse gas emissions.

The president’s initial fiscal 2022 budget proposal, released this morning, would create an array of programs and layer more funding on top of the federal government’s existing climate and clean energy efforts. Overall, the document says it would increase climate change investments $14 billion over fiscal 2021 levels.

The plan would create a Civilian Climate Corps, boost research and restore funding to the United Nations Green Climate Fund.

"ARPA-C" is an idea Biden also proposed on the campaign trail and as part of the infrastructure plan he unveiled late last month.

Investments in clean energy and efficiency would support "a historic energy efficiency and clean electricity standard that would transform the electric sector to be carbon-pollution free by 2035 and create good-paying union jobs," the proposal says.

At EPA, the budget calls for $1.8 billion for programs to reduce greenhouse gas emissions — a significant chunk of the $11.2 billion it requests for the agency overall — though the broad proposal is vague on where exactly that funding would go (see related story).

Biden’s budget would also see the return of U.S. engagement on climate abroad via the Green Climate Fund, long a point of contention on Capitol Hill.

It could be an important point for the White House, as it prepares for the president’s April 22 climate summit and U.N. climate talks later this year.

The budget would offer $1.2 billion to the fund, on top of $100 million for climate adaptation programs abroad and $485 for other international climate initiatives.

The Obama administration initially pledged $3 billion for the Green Climate Fund, which provides adaptation and mitigation programs in the developing world.

But Republicans have for years railed against it, and the United States offered only the first $1 billion before the Trump administration stopped paying after pulling out of the Paris climate agreement in 2017.

Congressional Democrats attempted to include money for the fund in the fiscal 2021 appropriations process but were unsuccessful amid opposition from Republicans.

Among the starkest contrasts between Biden’s proposal and President Trump’s budgets is how it would treat climate science.

Trump each year proposed to slash research funding across the board — despite being repeatedly rebuffed by Congress — but Biden’s budget would offer big boosts.

Biden’s budget would give NOAA $6.9 billion for its operations and to help fight climate change, an increase of more than $1.4 billion from the enacted level of fiscal 2021.

That would include $800 million for improvements in climate research, to support regional and local decisionmaking with climate data and other tools, and to strengthen community resilience efforts.

Among the specifics: a better drought early-warning system and more grants to build coastal resilience and to reduce the cost of severe weather events.

The additional spending for NOAA would include $2 billion for the agency’s next generation of weather satellites, an increase of $500 million from the enacted level in fiscal 2021.

The administration said the new money would pay for new technologies that would produce better data for both weather and climate forecasting.

NASA would also see big funding increases, with an emphasis on climate. The agency would get $24.7 billion, a roughly 6% increase over fiscal 2021 levels.

That would include a $250 million boost for its Earth Science Division, a big contributor to federal climate science, which would see $2.3 billion under the proposal.

The National Science Foundation and Interior’s climate program would get similar increases. NSF would hit $10.2 billion in funding overall, a $1.7 billion increase over fiscal 2021 levels, including a $500 million increase to $1.2 billion for its climate and clean energy research.

At Interior, the budget broadly proposes a $550 million increase for climate adaptation and mitigation programs, as well as an additional $200 million for climate science at the U.S. Geological Survey and other agencies.

But the proposed climate money in Biden’s budget is not limited to the agencies traditionally focused on clean energy and a warming climate.

It would also create a new Office of Climate Change and Health Equity at the Department of Health and Human Services to work on the disproportionate effects of climate change on vulnerable and low-income communities.