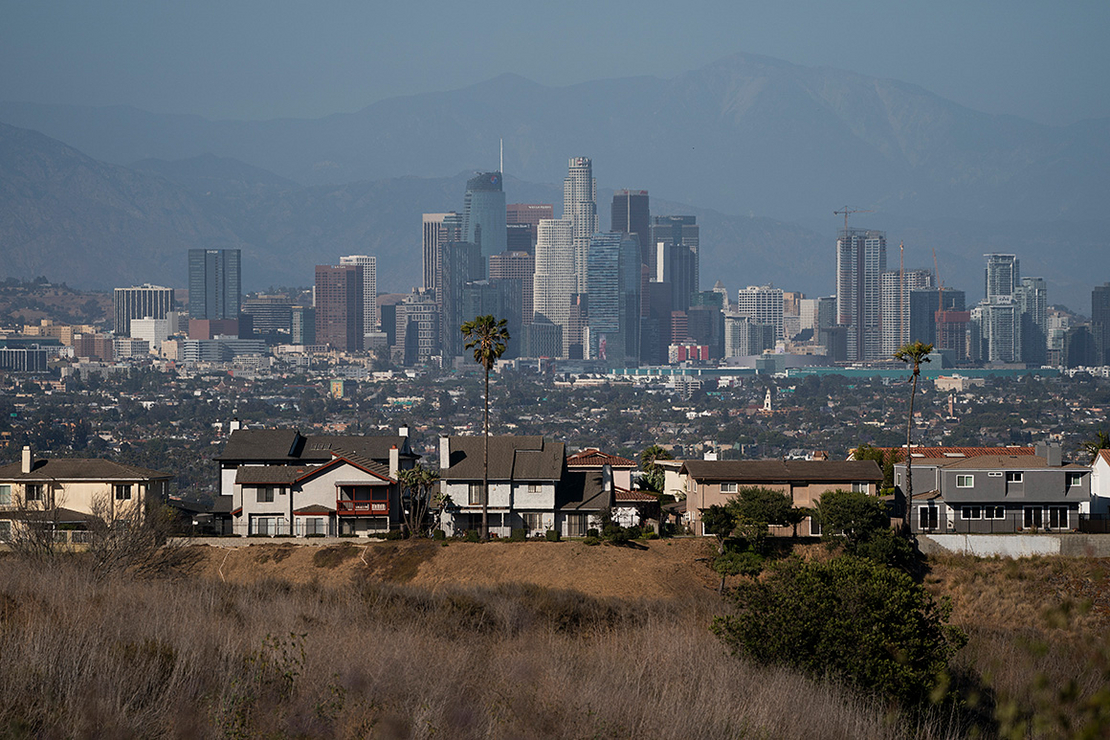 The Biden administration wants to reverse a Trump-era effort to grant grant rights of way to Cadiz Inc. for a pipeline sending water from the Mojave Desert to the Los Angeles area. Homes are pictured on a hilltop with a view of the downtown Los Angeles skyline on June 10. Jae C. Hong/AP Photo

The Biden administration is seeking to undo last-minute Trump-era approvals of a controversial water pipeline project in Southern California.

In a court filing Friday, the Biden administration said its predecessors used a "rushed process" to grant rights of way to Cadiz Inc. for shipping water from the Mojave Desert to the Los Angeles area using a former natural gas pipeline and did not adequately follow the National Environmental Policy Act.

"Due to the lack of analysis," Justice Department lawyers wrote, "the agency does not know the source of the water that will be transported through the pipeline and therefore could not have analyzed the potential impacts on the environment or historic properties of drawing down the water at its source."

The case touches on one of the of the longest-running water development disputes in California. For decades, Cadiz has been exploring ways to deliver water from a groundwater aquifer under its property to Southern California.

Conservationists have strongly opposed those efforts, contending that drawing down the aquifer would threaten a fragile desert ecosystem.

DOJ said in its filing that Cadiz has pursued multiple potential routes to ship water. At issue in the current case is a plan to convert part of an abandoned natural gas pipeline to shuttle the water.

In order to to use the pipeline, Cadiz needed the Bureau of Land Management to approve its use of rights of way over federal lands for a pipeline that it purchased from a natural gas company.

Cadiz petitioned BLM for the approval to convert the existing right of way to use the pipeline for water in May 2020, saying it could transport about 55,000 acre-feet of water annually, according to DOJ’s filing. An acre-foot is about 326,000 gallons, roughly as much as a Los Angeles family of four uses in a year.

In a statement, Cadiz said this project is separate from the desert aquifer effort that has been the subject of lobbying on Captiol Hill and other legal challenges. It also pointed out DOJ’s motion will be subject to a hearing at the court in March before the judge rules on it.

Cadiz has said this project was in its "early stages," and that it is aimed more at moving water around the West with the 220-mile former natural gas pipeline than at pumping water out of the desert aquifer.

On Dec. 21, 2020 — weeks before the end of the Trump administration — BLM transferred a portion of the right of way to Cadiz and granted another new one, totaling over about 110 miles of discontinuous federal land.

The Center for Biological Diversity, the Sierra Club and other groups challenged that decision in the U.S. District Court for the Central District of California.

In its filing on Friday, Justice Department officials asked the court to vacate those decisions and remand the issue to the agency.

In particular, they criticized the Trump administration’s analysis of the project.

"Cadiz did not explain where the water would come from," they wrote. "BLM should have evaluated the potential impacts of drawing down water."

The attorneys went on to note that for other water pipeline projects, such as one in Nevada, BLM conducted a robust NEPA analysis of impacts on groundwater.

Other groups have, however, supported the project and have argued that the water moved by the pipeline would serve disadvantaged communities. They have also said the filing by DOJ contradicts the Biden administration’s support for such new infrastructure.

"Saying the Administration wants to remove barriers for disadvantaged communities to access funds for clean water infrastructure, while at the very same time erecting yet another barrier to accessing clean water infrastructure for California’s most vulnerable communities is concerning and inconsistent," Jose Barrera, state director of the California League of United Latin American Citizens, or LULAC, said in a statement.

"It is our hope that this fumble on clean water, climate change and racial inequality is temporary and not cause for great concern."

Ileene Anderson, a Center for Biological Diversity scientist, called the approvals a "parting gift from the Trump administration to Cadiz."

"It’s wonderful that the Biden administration is righting this wrong," she said in a statement. "Cadiz’s massive water-privatization scheme would dry up the desert springs and seeps that some of California’s rarest plant and animals need to survive."