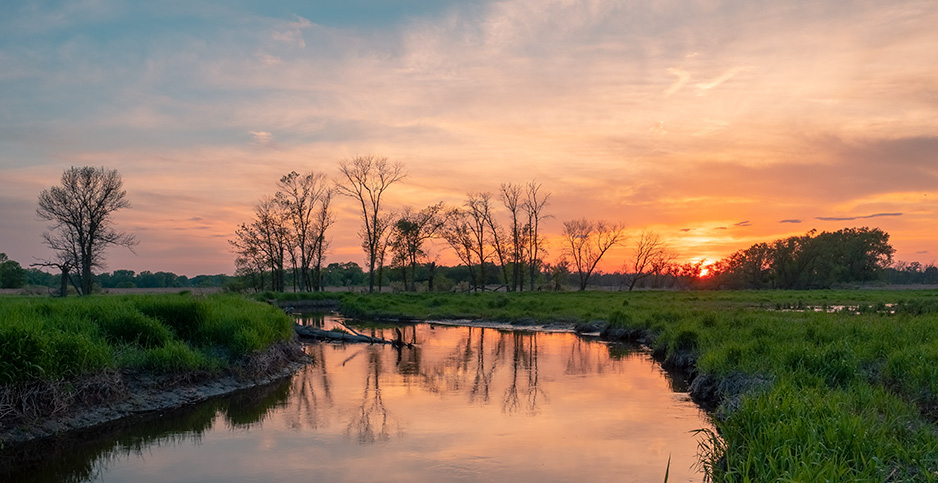 The Biden administration is running out of time to retain control of its efforts to recast some regulations governing wetlands and other waters of the United States. Dave Hoefler/@davehoefler/Unsplash.com

President Biden has gone full throttle in his first 100 days seeking to reverse Trump-era environmental rollbacks. But on one controversial rule, the president’s team may not be able to outpace the judicial system.

Key lawsuits that could define the reach of the Clean Water Act are working their way through federal courts — despite Biden administration attempts to stop them so it can craft its own regulations.

The cases concern what waterways and wetlands qualify for federal protections, a question that has befuddled judges for two decades.

One conservative legal group is hoping it can quickly return the issue to the Supreme Court, putting the Biden administration in the tricky position of litigating the definition of "waters of the U.S.," or WOTUS, before it has time to issue its own regulation.

"Those cases are pushing the administration to act," said Melissa Kelly of the University of California, Irvine, School of Law. "The administration clearly wants to avoid a decision on the merits before it is able to."

That may not be possible. The 9th U.S. Circuit Court of Appeals ruled on a Clean Water Act case last month that touched on the WOTUS question, and there is a second case in that court with familiar plaintiffs plowing forward. Both could provide paths to the Supreme Court for stakeholders who want to limit EPA’s Clean Water Act authority.

The situation is in some ways similar to what happened at the start of the Trump era.

At that time, two federal district courts ruled against the Obama EPA’s Clean Water Rule, and one court held that the regulation went beyond the agency’s congressionally mandated authority. Those legal decisions helped the Trump team justify its 2020 Navigable Waters Protection Rule, which took a much narrower view of what bodies of water qualify for Clean Water Act protections.

A ruling against the Trump administration’s regulation could similarly help Biden, said Tony Francois, an attorney with the conservative Pacific Legal Foundation (PLF) in Sacramento, Calif.

"But it’s also possible that further litigation on the 2020 rule could hem them in in some ways," he said, referring to Biden’s EPA.

If a court determines that EPA may not go further — or regulate more broadly — than the WOTUS definition in President Trump’s rule, the Biden administration may have difficulty crafting a more far-reaching regulation that stands up in court, said David Fotouhi, former EPA general counsel during the Trump administration.

"That may be more challenging for EPA to overcome in a new rulemaking," said Fotouhi, who is now a partner at the firm Gibson Dunn & Crutcher LLP.

Francois and PLF represent challengers in one of the Clean Water Act cases at the 9th Circuit, which concerns whether an Idaho property contained wetlands that fall under the law’s jurisdiction.

The case has reached the Supreme Court before. In 2012, the justices unanimously ruled that Mike and Chantell Sackett could challenge EPA’s jurisdictional determination in court.

Now, the Sacketts and PLF are defending the Trump rule in light of the Supreme Court’s famously muddled 2006 ruling in Rapanos v. United States.

In the 4-1-4 decision, a majority of the court’s justices could not coalesce on a single test for defining the scope of the Clean Water Act.

The late Justice Antonin Scalia won four votes for his majority opinion that said waters must have a "continuous surface connection" to a navigable water in order to qualify — a definition the Trump administration used as the foundation of its 2020 rule. Former Justice Anthony Kennedy wrote a stand-alone opinion in support of the broader "significant nexus" test, which served as the basis for the Obama rule.

Francois said the Supreme Court needs to review the issue and provide some clarity on Rapanos. Otherwise, he said, EPA’s rules will continue to whipsaw between Republican and Democratic administrations.

Litigation over Trump’s WOTUS rule is moving forward in the U.S. District Court for the District of Colorado, despite the Biden team’s calls to press pause on the dispute. The 10th U.S. Circuit Court of Appeals said the case should continue, and it later revived Trump’s rule in Colorado, the only state where the regulation had been put on ice.

Briefs in the Colorado District Court litigation are due this summer. The Biden administration could ask the court to send the government back to work on WOTUS without scrapping the rule — as it did in litigation over Trump’s overhaul to National Environmental Policy Act implementing rules (Energywire, March 18).

Environmentalists are asking another bench — the U.S. District Court for the District of South Carolina — to move forward with their lawsuit arguing that Trump’s rule is far too narrow.

The Southern Environmental Law Center, which is representing challengers in the case, said the courts may provide the fastest avenue to relief from Trump’s WOTUS regulation. Data from the Army Corps of Engineers show that Trump’s rule may have led to lasting damage to U.S. waterways (Greenwire, March 19).

"We’re encouraged that the Biden administration has said it will reconsider this rule, but rulemakings take time," said Kelly Moser, senior attorney with the law center. "To do it lawfully can take a year to two years. We see a real risk to the rule staying in place."

While the early days of the Trump administration were marked by legal losses over improperly delayed and suspended Obama-era rules, the Biden team may have more success freezing Trump rules, due to the robust records that were developed to underpin Obama regulations like the Clean Water Rule, said Bethany Davis Noll, executive director of the State Energy & Environmental Impact Center at the New York University School of Law.

Halting Trump’s WOTUS rule would buy Biden’s EPA and Army Corps some time to write a new regulation from scratch.

"If they want to reverse course," Noll said, "there’s a record that would support that."

If the WOTUS question makes it to the Supreme Court, Biden is likely to run into a firewall composed of the court’s six conservative justices.

The conservative wing of the court is thought to be more sympathetic to Scalia’s interpretation of the Clean Water Act’s scope than to Kennedy’s reading of the statute.

And all six Republican-appointed jurists on the bench have expressed support for the so-called nondelegation doctrine, or the view that administrative agencies should not promulgate rules that aren’t expressly authorized by legislation.

“This court is clearly poised to greatly restrict the ability of Biden, or EPA, or Interior to do something unless Congress has given them that authority”

Support for the doctrine was evident at the Supreme Court during the Obama administration, said Robert Percival, director of the University of Maryland’s Environmental Law Program. It has grown stronger with Trump’s three nominees to the high court, he said.

"This court is clearly poised to greatly restrict the ability of Biden, or EPA, or Interior to do something unless Congress has given them that authority," he said.

And even if it has, Percival added, "they’ll raise questions about it."

In some cases, he said, the court’s approach to the doctrine has been "hypocritical."

The court repeatedly allowed the Trump administration to continue constructing its border wall, even though Congress explicitly denied the former president’s request to appropriate funds for the project (Greenwire, Aug. 3, 2020).

The Clean Water Act cases could provide the Biden administration its first opportunity to test the nondelegation waters at the Supreme Court.

The cases will show whether the Biden administration has learned from the end of the Obama years, when several rules — including the landmark Clean Power Plan, which regulated emissions from power plants — were either stayed or blocked in court.

"Are they going to double down and be aggressive in rulemakings?" asked Sean Herman, an associate at the firm Hanson Bridgett LLP. "Or do they try to thread a needle and try to come up with a nuanced approach to address some of the concerns the Supreme Court has raised in recent rulings?"

‘Be careful what you wish for’

Groups like PLF aren’t guaranteed a favorable outcome before a conservative Supreme Court.

Lawyers for the regulated community had been betting that the court would offer a restrictive view on whether pollution that moves through groundwater on its way to jurisdictional waters is subject to federal permitting requirements.

But Chief Justice John Roberts and Justice Brett Kavanaugh joined their liberal colleagues in support of a ruling that was largely heralded as favorable for environmental interests (Greenwire, April 23, 2020).

"Be careful what you wish for in light of Maui," Pujari said. "I don’t know that it’s a slam dunk for any side of the issue."

Even if a WOTUS case does make its way to the Supreme Court, there’s no guarantee that the justices will come back with a clear answer on the scope of the Clean Water Act.

The Maui and Rapanos cases, for example, have created decades’ worth of legal wrangling over the statute’s reach.

A Supreme Court ruling on WOTUS — regardless of when it comes — is unlikely to be the final say on the matter, said Larry Liebesman, senior adviser at Dawson & Associates.

"It keeps going round and round," Liebesman said. "Will Congress fix the problem? No."