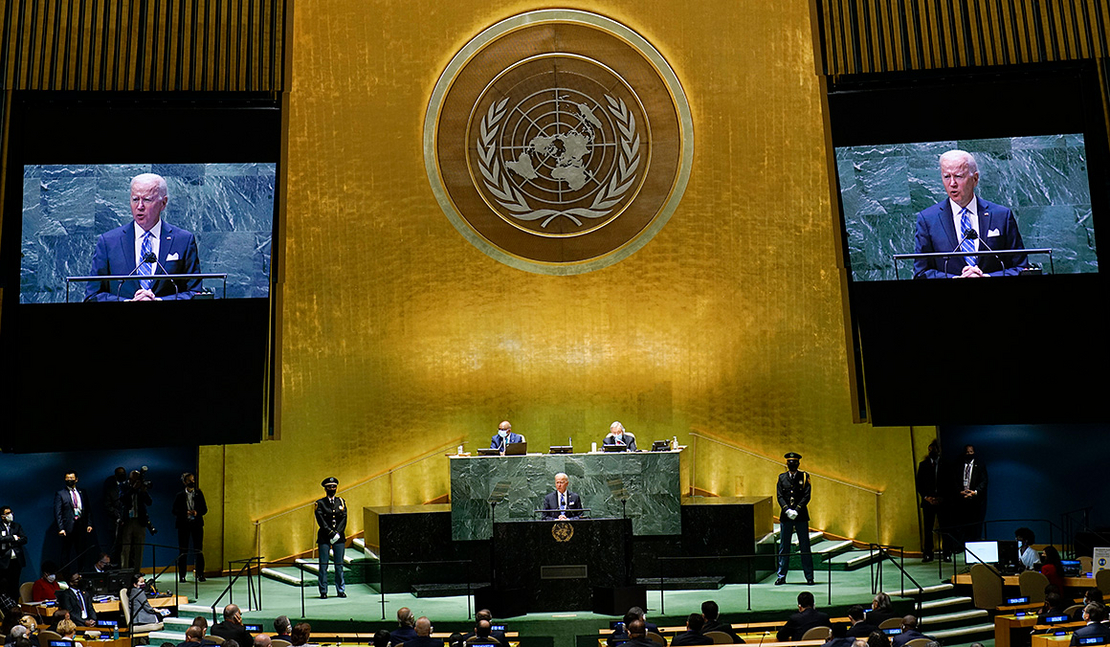 President Biden addresses the 76th Session of the U.N. General Assembly today at U.N. headquarters in New York City. More than 100 heads of state or government are attending the session in person, although the size of delegations is smaller due to the COVID-19 pandemic. Eduardo Munoz-Pool/Getty Images

During his first address to the United Nations today, President Biden more than quadrupled the U.S. financial commitment to help developing countries respond to climate change.

Under Biden’s pledge, the U.S. will contribute $11.4 billion annually by 2024 toward climate action in the countries that contribute the least to global warming but are among the most vulnerable. The administration’s fiscal year 2022 request was for $2.5 billion.

Biden’s announcement doubled his April pledge and said it was part of the U.S. effort to drive global climate ambitions when world leaders gather in Glasgow, Scotland, next month for international climate talks that are widely viewed as the last, best chance to limit warming to 1.5 degrees Celsius above preindustrial levels.

“Every nation needs to bring their highest possible ambitions to the table when we meet in Glasgow, and then we have to keep raising our collective ambition over time,” Biden said.

Biden used his appearance before the U.N. General Assembly to position the U.S. as a world leader on climate, after four years of isolationism from former President Trump, who withdrew from the Paris climate agreement. Biden said the increased funding “will make the United States the leader in public climate finance” as the world moves closer to mobilizing $100 billion annually to support climate action in developing countries.

But, like much of Biden’s climate ambitions, his pledge largely depends on Congress and whether it will devote that level of funding to international ambitions.

Biden also touted his administration’s effort to increase the number of electric vehicles and to deploy more clean energy, but the success of that policy remains intertwined with thorny domestic challenges.

Democratic infighting between moderates and progressives now threatens to derail the $3.5 trillion reconciliation package that contains the most aggressive pieces of Biden’s climate agenda.

Nevertheless, Biden told world leaders that time is running out to be more ambitious on climate action.

“This year has also brought widespread death and devastation from the borderless climate crisis,” Biden said. “Extreme weather events that we’ve seen in every part of the world — and you all know it and feel it — represent what the secretary-general has rightly called ‘code red’ for humanity.”

Though scientists have long warned of the emergency, when it comes to international climate assistance, the world’s top emitters have fallen short. For example, the $100 billion pledge was made back in 2009 during global climate talks and has yet to be fully realized.

The new pledge brings the U.S. closer in line with other industrialized nations but still puts it below the European Union, which provided nearly $25 billion in climate finance in 2019.

A recent report from the Overseas Development Institute think tank found that of the nearly two dozen developed countries contributing international climate finance to the $100 billion, only Germany, Norway and Sweden have been paying their fair share.

The U.S. has had the greatest shortfall. Were it to pay its “fair share” based in large part on the size of its economy, ODI estimated it would need to put forth $43 billion a year.

Rachel Cleetus, policy director for climate and energy at the Union of Concerned Scientists, called the new financing commitment "a welcome and much-needed sign that the United States is finally taking its global climate responsibilities seriously."

But she said U.S. credibility depended on the Biden administration securing policies to deliver its promise to sharply cut its greenhouse gas emissions and increase its international climate finance commitment immediately to at least $3.3 billion from its initial request for fiscal 2022 of $2.5 billion.

“Climate-vulnerable nations — particularly low- and middle-income countries — are already reeling from an unprecedented onslaught of climate-related disasters and desperately need financial support to adapt and build resilience to worsening impacts,” Cleetus said in a statement. “And they need resources to help them rapidly transition to clean energy.”