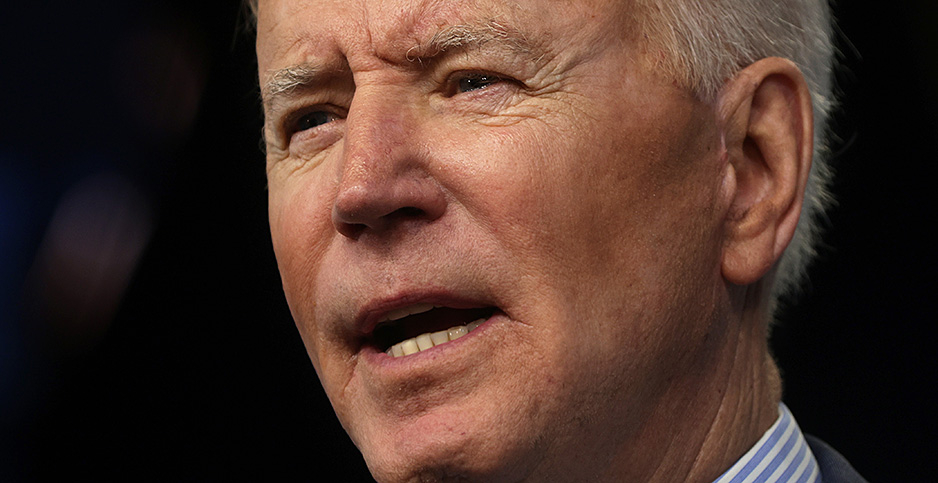 "I’m a real reg nerd so super excited to share the Biden Administration’s first regulatory agenda out today," Sharon Block, acting director of the Office of Information and Regulatory Affairs, tweeted this morning.

Block said in a statement that the regulatory plan "continues rolling back the obstacles to recovery, equity, and sustainability that the prior Administration put in place, such as making it significantly harder for families to challenge discriminatory housing practices and emboldening corporate polluters as they continued to harm people and communities."

Formally known as the Unified Agenda, the biannual plan showcases an administration’s priorities and offers a glimpse into how quickly and aggressively those priorities might be carried out.

It builds on "a list of agency actions" Biden ordered officials to review on his first day in the White House. It was an unprecedented move for a brand-new president.

While the agenda functions as a loose, aspirational guide, it is particularly important given the ongoing gridlock on Capitol Hill. Biden will be forced to advance many of his goals by regulatory action rather than legislation.

That might be especially true for environmental and energy rules, which will be critical to implementing what Biden has vowed to be a bold climate agenda.

Regulatory scholars combing through the trove of materials this morning offered a few key take-aways. For one, James Goodwin at the Center for Progressive Reform said, the term "deregulation" has been completely scrapped.

Progressives generally argue that there is no such thing as "deregulation." Rather, they say, the term is shorthand for weaker standards.

Conservative analysts, like Wayne Crews at the Competitive Enterprise Institute, said the change constitutes "a blow to public disclosure." He said that even the "deregulatory" designations during the Trump years have vanished.

Another take-away is the number of important items on the long-term agenda, noted Paul Billings, a vice president of the American Lung Association — "things like dealing with trucks, power plants, mercury and air toxics issues and the air quality standards implementation plan."

Goodwin crunched the numbers and found that roughly 1 in every 5 current active rulemakings originated under Biden.

In addition, Biden has already abandoned about 10% of the Trump administration’s lingering active rulemakings. Of those, 15% were categorized as "economically significant."

In all, Goodwin said, that amounts to "fairly high turnover." "If Biden is able to follow through with most of this, then that is a good sign for the public interest," he said.

But, as Billings noted, the administration is not showing what would come after the 2025-26 time period. "There is some information on climate, but there are some gaps," he said.

The White House did include a plan to increase the money that industry must lay down to develop publicly owned minerals.

A proposed Interior Department rule would seek to "update the fees, rents, royalties, and bonding requirements related to development and production."

It would also "update the [Bureau of Land Management]’s process for leasing to ensure the protection and proper stewardship of the public lands, including potential climate and other impacts associated with fossil fuel activities."

The notice is the most detailed information on the administration’s fossil fuel plans in months, though both industry and conservation groups see oil and gas drilling practices in the president’s crosshairs.

The White House froze the sale of new oil and gas leases shortly after Biden took office, pending a comprehensive review of the program. That review was to include a consideration of climate impacts and possible royalty changes.

An adjustment to BLM royalty policy could have a negative impact on coal companies’ bottom lines. Miners operating in the West commonly request royalty reductions to help cope with downturns in coal markets.

Environmentalists have thus far been unsuccessful in their attempts to convince Interior to reinstate a coal leasing moratorium that the Obama administration initially put in place to reevaluate royalty rates and climate impacts.

Interior’s coal bureau is reevaluating a controversial Trump-era rule governing investigation of environmental violations at mines. The Office of Surface Mining Reclamation and Enforcement eased federal involvement in inspections under the former director.

Citizens groups sued in federal court in January, but the Biden administration asked to pause litigation while it reconsiders new regulation (Greenwire, Jan. 25).

The administration today gave no date for a proposed regulatory update to the coal office’s so-called 10-day notice rule.

Also on the fossil fuel front, the administration plans to revisit offshore oil and gas safety standards for well control systems and blowout preventers, according to the agenda. The Bureau of Safety and Environmental Enforcement (BSEE) is "revising existing regulations."

These rules were developed in the wake of the Deepwater Horizon oil explosion and crude spill of 2010, which killed 11 men and led to a monthslong shutdown of some oil operations in the Gulf of Mexico.

The Trump administration pared back some of those requirements to increase flexibility for offshore operators, inviting criticism from conservation groups and Obama-era officials.

The long-term agenda also includes a plan to formalize the division of responsibilities for offshore renewable energy between the Bureau of Ocean Energy Management and BSEE, with the latter taking over safety and environmental enforcement authorities.

The action anticipates the construction of the first fleet of offshore wind farms on the outer continental shelf in the coming years.

Notably, the Department of Agriculture said it would "repeal or replace" the Trump administration’s exemption of Alaska’s Tongass National Forest from roadless-area restrictions on timber and other development, covering the management of about 9.2 million acres of the nearly 17-million-acre forest. A further announcement on that move could come in August, the administration said.

On water quality and permitting, the administration has set out a busy agenda revamping or undoing Trump-era rules.

EPA’s Office of Water plans to finalize a new Lead and Copper Rule by June of next year after delaying implementation of the Trump administration’s rewrite. When finalized, the rule will reflect the first update to federal drinking water standards in nearly 30 years.

The agency plans to release a final rule in 2022 regarding what states and tribes can consider when permitting energy projects under the Clean Water Act.

EPA in May announced it would reverse the Trump administration’s interpretation of the regulation that barred the consideration of issues like climate change and air pollution.

Further out, EPA is considering establishing water quality standards for Indian reservations that do not yet have them.

When it comes to the Clean Water Act, EPA plans to clarify what states are required to do in order to take over wetland permitting.

But any plans for a new definition of "waters of the United States" were not listed on the Unified Agenda, suggesting the Biden administration will not take any further action on that this year.

Toxics regulation is also a priority for the administration, with a sharpened focus on per- and polyfluoroalkyl substances (PFAS).

By December of this year, EPA expects to finalize a rule proposing monitoring of 29 PFAS in drinking water. Citing available data on wastewater discharges from facilities that manufacture PFAS, EPA also said it will consider revising the effluent limitations and guideline standards that apply to those sites.

Over the longer term, EPA is seeking to regulate PFOA and PFOS in drinking water, an action the agency expects to complete in 2024. EPA said it will continue to consider other PFAS as part of that action.

The agency has already solicited information from relevant facilities and will weigh next steps for potentially proposing PFAS discharge standards.

Under the Toxic Substances Control Act (TSCA), EPA is developing a proposed rule to establish reporting requirements for PFAS, which would allow the agency to collect data on the chemicals from manufacturers (E&E News PM, June 10). A final rule is expected by July of next year.

The agency is mulling significant changes to how it approaches chemical regulation. Possible shifts include reconsidering procedures for chemical risk evaluation under TSCA, citing the need to center best available science as well as "the advancement of racial equity and support for underserved communities."

EPA is studying new provisions around the steps that chemical manufacturers must take to shield business information from the public.

Completed risk evaluations will see movement as the agency proceeds with rulemaking for the first 10 chemicals assessed under the overhauled TSCA, including chrysotile asbestos and 1,4-dioxane. EPA is also finalizing emissions guidelines for municipal solid waste landfills (Greenwire, May 18).

EPA will need until the end of next year to scrap or amend a particularly contentious Trump-era rollback of a long-standing air toxics policy, the agenda shows.

Dubbed "once in, always in," the policy required factories, refineries and other industries to maintain "maximum achievable" pollution controls on their plants even after emissions fell below the levels that triggered the control requirement in the first place.

The policy dated back to the mid-1990s. The Trump administration, saying it ran contrary to the plain language of the Clean Air Act, ended it with a 2018 memo and then followed up with a formal rulemaking last fall (Greenwire, Nov. 20, 2020).

Critics charged that the rollback would lead to more releases of hazardous pollutants like arsenic and cancer-causing benzene. Even before officially taking office, the Biden administration signaled plans to review it (Greenwire, Jan. 20).

In the agenda, EPA officials said they intend to issue a draft rule suspending, revising or repealing the Trump administration’s decision by this December, with the final version coming at the end of 2022.

That decision is among dozens of "agency actions" that the Biden administrations is reviewing. By this August, EPA will also propose new rules to address petitions from New York and Maryland that smog-forming power plant emissions from other states are undercutting their ability to meet national air quality standards, according to the agenda.

While the Trump administration had denied those petitions, the U.S. Court of Appeals for the District of Columbia Circuit in separate rulings last year ordered EPA to take another look.

The agenda does not include a timetable for issuing the final version of those regulations. Dozens of other air quality rulemakings on the roster include plans to resume reconsideration of a New Source Review "fugitive emissions" permitting rule that has been on hold for a decade and to set particulate matter emissions standards for commercial jet aircraft that are "at least as stringent" as those of the International Civil Aviation Organization.

The Fish and Wildlife Service said it would work on multiple aspects of the Endangered Species Act, from the general to the specific.

FWS will propose reaffirming that listing determinations are made "without reference to possible economic or other impacts of such determination," along with other potential revisions also under discussion.

More specifically, the agency plans on making myriad ESA listing decisions and critical habitat designations for various species, including the Burrington jumping-slug and the hairy-peduncled beaked-rush.

The Occupational Health and Safety Administration is exploring whether to write a standard protecting indoor and outdoor workers from heat, and is planning to issue a request for information in October.

The agency denied a petition for such a standard under the Obama administration, but workers’ rights and environmental groups filed new petitions in 2018 and 2019 that the agency has yet to answer. Lawmakers have also introduced bills that would require heat protections for workers (Greenwire, Jan. 22).

The Mine Safety and Health Administration is proposing a rule that could help tackle an alarming uptick in miner fatalities caused by vehicles underground and on the surface. Seventeen miners have died on the job in accidents already this year, more than double last year’s count by June (E&E News PM, June 10).

MSHA hopes its powered haulage rule, due to be published next month, will help curb these accidents by implementing an updated safety program fit for individual mines.