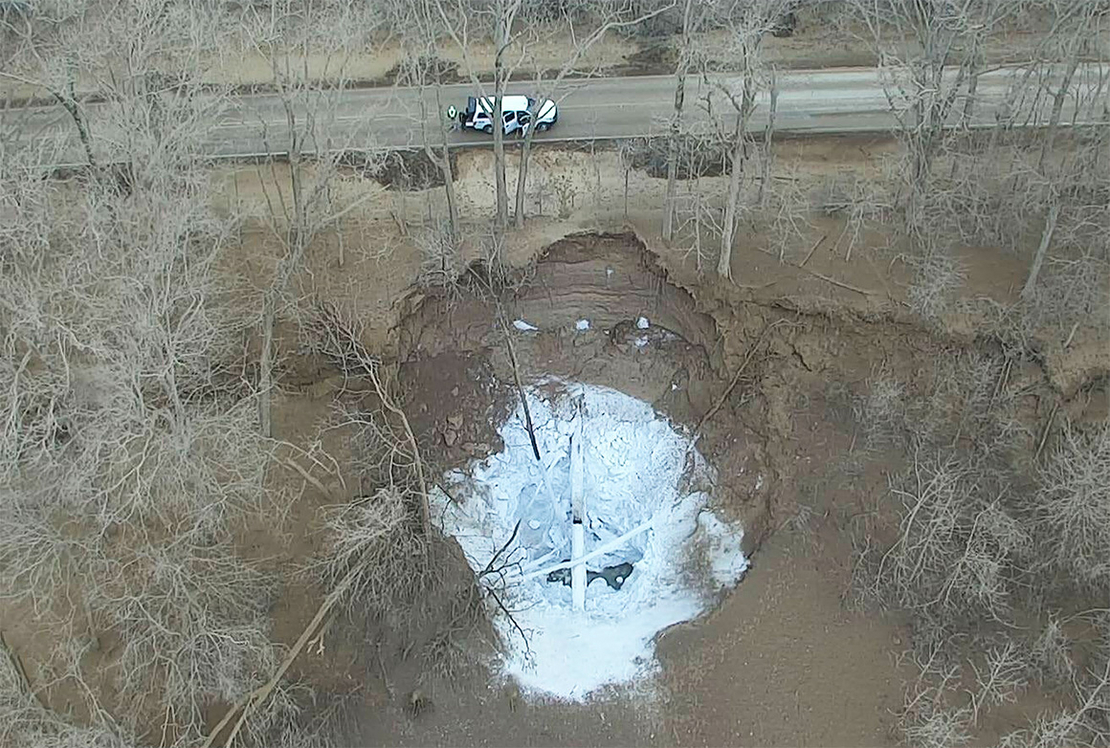 A drone photo taken from above the rupture of a carbon dioxide pipeline near Satartia, Miss., in February 2020. The vapor cloud that escaped caused the evacuation of 200 people and sent at least 45 to the hospital. PHMSA investigative report/Mississippi Emergency Management Agency

The Biden administration yesterday stepped into a debate about the safety of carbon dioxide pipelines, announcing plans for new safety rules and seeking a nearly $4 million fine for a rupture two years ago in Mississippi that sent at least 45 people to the hospital.

The Pipeline and Hazardous Materials Safety Administration also rolled out several other CO2 pipeline measures, including a 269-page investigative report on the failure in Mississippi and an updated safety advisory to the industry.

The package is designed to protect the public from “dangerous pipeline failures” and address concerns that have been voiced about proposals to ship carbon dioxide underground to reduce the climate effects of fossil fuel production (Energywire, March 31). The $3,866,734 fine is the largest fine ever sought by PHMSA.

“The safety of the American people is paramount and we’re taking action to strengthen CO2 pipeline safety standards to better protect communities, our first responders, and our environment,” PHMSA Deputy Administrator Tristan Brown, the top administration official at the Transportation Department agency, said in a news release.

Advocates of carbon capture, utilization and storage said they welcome safety rules for pipelines, which they say have an excellent safety track record.

“CO2 pipelines are actually some of the safest infrastructure that we’ve built in terms of all of the infrastructure that’s going to be necessary to mitigate climate change,” said Jessie Stolark, the public policy and member relations manager at the Carbon Capture Coalition.

The February 2020 rupture in Mississippi has become a rallying cry for some pipeline opponents in the Midwest, where several projects have been proposed to carry captured carbon dioxide from ethanol plants. In the Mississippi incident, a pipeline owned by Plano, Texas-based Denbury Inc. was snapped by a landslide. Its contents, mixed with deadly hydrogen sulfide, were intended to be used for enhanced recovery of oil. The rupture caused a blast that left a crater 40 feet deep.

A plume of liquid CO2 grew, crested a hill and crept west on the windless night until it reached the village of Satartia, Miss.

Carbon dioxide is not toxic, but a cloud of it can displace oxygen and asphyxiate people. It is heavier than air and spreads along the ground until it dissipates. People in and around Satartia reported sensing the rotten-egg odor of hydrogen sulfide, then feeling dizzy or even passing out.

PHMSA’s accident investigation and penalty notice released yesterday allege a cascade of failures by Denbury before and during the incident.

Denbury failed to tell emergency officials and some people living near the line about the dangers if the pipeline were to rupture, the reports say, and gave no information about what to do. An in-depth investigation of the Satartia rupture by the Climate Investigations Center found that dispatchers initially told panicked callers that there had been a natural gas leak. PHMSA said emergency officials initially thought they were responding to a chlorine leak.

The company “significantly” underestimated the size of the area likely to be affected by a release of CO2, PHMSA said, and failed to address known dangers to the pipeline such as landslides, conducted inadequate monitoring of the ground above the pipeline and took too long to notify officials after the blast.

Denbury, a $3.7 billion company that produces oil in several basins by forcing it out of the ground with carbon dioxide under pressure, did not respond directly to PHMSA’s allegations or the fine. It issued a statement through a spokesperson saying company officials are taking steps to reduce the threat to the company’s pipelines from “geohazard conditions” such as landslides.

“Following the incident, Denbury personnel worked directly with local officials and residents to ensure that any needs arising from the incident were met,” the company said. The statement added that Denbury “continues to address these needs as they arise.”

About 200 people were evacuated during the incident. In its final report to PHMSA in November 2020, Denbury left blank the field for the number of people injured and requiring treatment at a hospital. The narrative section of the report stated that 45 people had sought medical attention and added that the company knew of no one being admitted to the hospital. The Climate Investigations report found that many people sickened by the plume felt they were discharged too quickly, and some sought treatment at bigger hospitals the next day.

The report said the failure caused about $3.5 million in damage to Denbury’s equipment and property, and said the company had spent $205,462 on emergency response.

Denbury had a history of CO2 incidents leading up to the Mississippi rupture, according to the Climate Investigations report, and has a history of other mishaps, such as spills. A review of spills at oil and gas sites in 2013 by E&E News ranked Denbury seventh in the industry for spills and found that it accounted for 87 percent of the 123 spills that year in Montana (Energywire, May 12, 2014).

“CO2 releases can be incredibly hazardous to our communities,” Caram said. “The list of proposed new CO2 pipeline projects seems to grow every week, which makes it all the more important to modernize our safety regulations immediately.”

PHMSA did not offer dates or a timeline for the new rulemaking it announced. The standards, it said, are to include “requirements related to emergency preparedness, and response.”

The agency put a notice in the Federal Register in 2016 seeking comments on an agency report about regulating carbon dioxide. Agency officials said they will draw on those resources as they begin the rulemaking process.

Currently, there are about 5,000 miles of carbon dioxide pipelines, mostly for enhanced recovery of oil. If carbon capture and storage projects were to increase significantly, the CO2 pipeline network also would need to increase.

Movement toward updated safety rules is “a good sign,” said Jessica Oglesby, a spokesperson for the Global CCS Institute, a think tank whose goal is to accelerate carbon capture deployment.

“It is an acknowledgement of the growing importance of CO2 pipelines and that the length of the network will likely increase in the future,” Oglesby said in an email.

The Carbon Capture Coalition’s Stolark called the incident in Satartia “terrible” and something that shouldn’t have happened. She added that the coalition is “glad that PHMSA is taking the existing rules very seriously and looking at additional tweaks to ensure that the pipelines remain as safe as possible.”

Summit Carbon Solutions, which is proposing the biggest of several projects in the Midwest, is “closely reviewing” PHMSA’s findings on the Mississippi rupture, said company spokesperson Jesse Harris.

The Summit project is to take captured CO2 from ethanol plants and other facilities across the Midwest and sequester it in North Dakota. Harris stressed that the plan is very different from Denbury’s enhanced oil recovery operations.

“Our project will compress, transport and store carbon dioxide, which is nonexplosive and nonflammable,” Harris said in an emailed statement. The hydrogen sulfide that contaminated Denbury’s CO2, he noted, is “highly toxic and flammable.”

Before yesterday, the largest fine PHMSA had sought was $3.7 million in 2012 against Enbridge Energy Partners for spilling hundreds of thousands of gallons of crude oil into Michigan’s Kalamazoo River (Energywire, April 3, 2018).

PHMSA has been involved in one larger fine. It joined with EPA and the Department of Justice in 2011 to levy a $25 million fine against BP Alaska for $25 million for a spill on the North Slope.