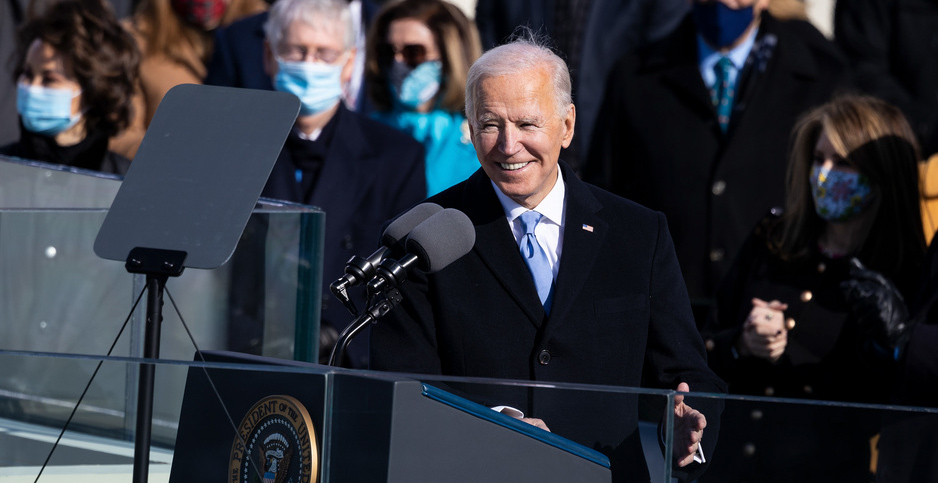 President Biden said yesterday that his administration would work to convert the federal fleet of cars and trucks to electric vehicles. But a related executive order did not specify that change. Francis Chung/E&E News

But advocates were left holding their breath when Biden signed an executive order last night that compelled the federal government to buy American-made products — but stopped short of singling out EVs.

The details of the EV directive may not come until tomorrow, when the White House plans to hold a "Climate Day" and it releases a flurry of additional orders aimed at combating climate change domestically, sources said.

Standing in front of a blue backdrop that read "The Future Will Be Made in America," Biden said yesterday afternoon that federal fleets would transition to EVs.

"The federal government also owns an enormous fleet of vehicles, which we’re going to replace with clean electric vehicles, made right here in America by American workers," he said.

Biden’s statement matched a line in his climate plan from the campaign, which called for "using the federal government procurement system — which spends $500 billion every year — to drive towards 100% clean energy and zero-emissions vehicles."

Yet when Biden signed an executive order a few hours later, the phrase "electric vehicles" was nowhere to be found.

The directive, dubbed "Executive Order on Ensuring the Future Is Made in All of America by All of America’s Workers," instead tightens the definition of American-made goods and creates a Made in America Office within the White House Office of Management and Budget.

Biden is planning to sign an additional batch of executive orders on climate tomorrow. Those include a directive to federal agencies to rely on science in their rulemakings, an order reestablishing the Presidential Council of Advisors on Science and the announcement of a U.S.-hosted climate summit on April 22, according to a memo seen by Reuters.

A White House spokesman declined to comment on the record for this story.

The federal government owns and operates a fleet of more than 650,000 vehicles, according to the General Services Administration.

In a 2019 report, the Government Accountability Office found that agencies have been reluctant to buy EVs because of high prices and a lack of charging infrastructure.

"The Zero Emission Transportation Association believes that as we electrify and decarbonize the transportation sector, we should be seeking at every turn to create jobs right here in America," Britton said in an email.

"We look forward to working with the Administration to catalyze the advanced vehicle sector and take advantage of the enormous economic potential EVs have to offer," he added.