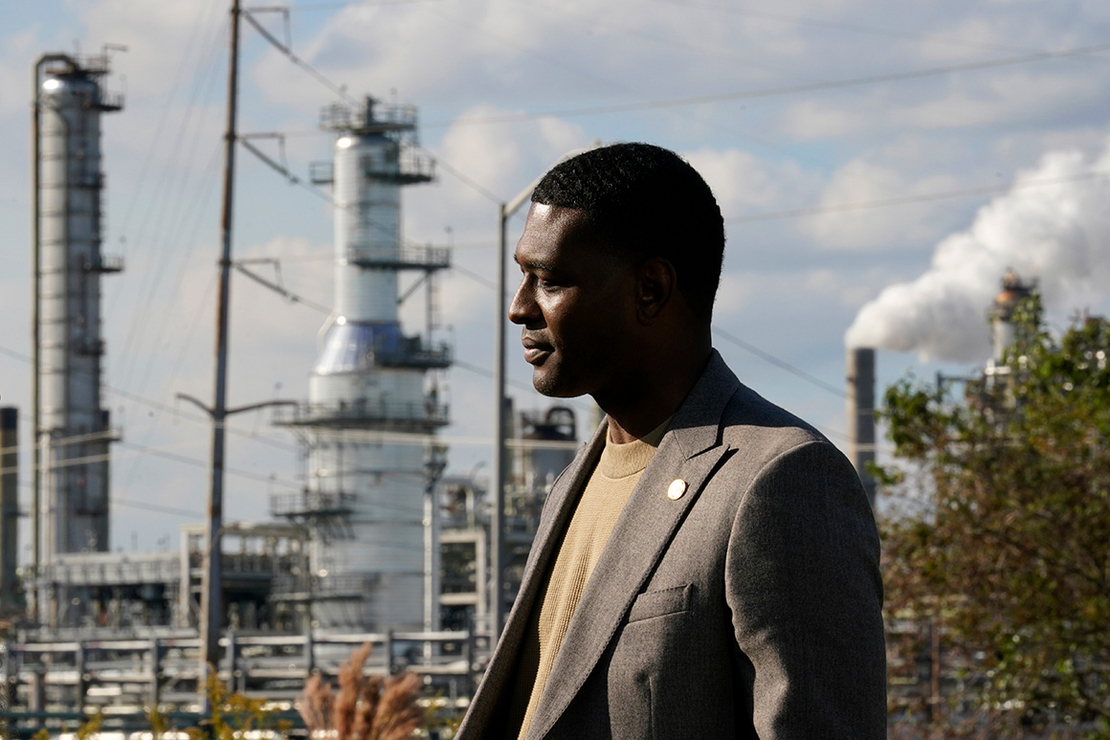 EPA Administrator Michael Regan near the Marathon Petroleum Refinery in Louisiana, while touring neighborhoods that abut the refinery on his “Journey to Justice" tour late last year. AP Photo/Gerald Herbert

President Biden has doubled down on his effort to embed environmental justice throughout EPA.

The Biden administration’s fiscal 2023 budget proposal requests $300.8 million for the agency’s environmental justice program, including for standing up a new national office to administer the work with resources in EPA’s headquarters and all 10 of its regional outposts.

“To elevate EJ across EPA, the Budget also includes the creation of a new EJ National Program Manager led by a Senate-confirmed Assistant Administrator,” EPA said in its “Budget in Brief” document, which was released yesterday as part of Biden’s fiscal blueprint.

In addition, the spending would fund five grant programs to reduce “the historically disproportionate health impacts of pollution in marginalized and overburdened communities,” the document said. It would also support climate training and outreach programs as well as back up community-based and state, local and tribal governments looking to address environmental justice issues.

It’s all part of Biden’s ambitious budget plan for EPA, which would give $11.9 billion overall to the agency, a roughly 25 percent increase over current funding (Greenwire, March 28).

“Kudos to the administration for another stride to embed EJ as a national priority,” said Catherine Flowers, founder of the Center for Rural Enterprise and Environmental Justice.

“There is an opportunity to make some transformative changes,” said Robert Bullard, another veteran environmental justice leader and a Texas Southern University professor.

The sum requested by the administration would triple what lawmakers have just given EPA for environmental justice.

Under the omnibus package enacted earlier this month, Congress slated $100 million for the agency’s program. That didn’t match Biden’s first budget proposal released last year, which also asked for funding similar to this year’s request and proposed an assistant administrator position to lead the charge. Nevertheless, it is still a more than $80 million shot in the arm for environmental justice at EPA.

Mustafa Santiago Ali, once a longtime environmental justice adviser at EPA, remembered that for decades, there was only $6 million or $7 million for all of the environmental justice programs that were undertaken across the agency, from paying staff salaries to funding on-the-ground work. That is tiny compared with the $100 million in appropriations EPA now has.

“It puts the strong foundation underneath the environmental justice work that has to happen at the agency,” Ali, now a vice president at the National Wildlife Federation, told E&E News.

“It’s a big, big step,” added Vernice Miller-Travis, executive vice president for social justice at Metropolitan Group, an advocacy organization, about that influx of funds to EPA’s environmental justice program. “No one has ever thought to do anything like this before. So it speaks to the level of seriousness that they have said in the past.”

Still, other program offices at EPA typically have greater funding.

“For major program offices, it’s much smaller,” Ali said. “But they give us an example of where to build to.”

In an explanatory statement accompanying the omnibus package, lawmakers said they expect EPA to outline “a comprehensive Environmental Justice proposal” in the fiscal 2023 budget, which should include “specifics about a proposed national program office and relevant program metrics.”

What happens next on that national office proposal is unclear. An EPA spokesperson declined an E&E News interview request with agency officials for this story.

EPA, relying on the reorganization plan that created the agency, can launch a reorganization to create a new assistant administrator position. The effort is expected to have environmental justice woven into the agency’s regional offices, national program managers and statutory authorities (Greenwire, Feb. 17).

There already is at EPA an Office of Environmental Justice, located in the policy shop. Further, Robin Morris Collin has been hired as the senior adviser to the administrator for environmental justice, a post separate from the proposed assistant administrator job.

The Biden administration has sought to cement environmental justice across the agency.

Also mentioned in budget documents is the agency’s strategic plan, which EPA finalized yesterday and which emphasized environmental justice work at the agency.

Further, the strategic plan takes the principles of following the science and the law as well as being transparent — espoused by the agency’s first administrator, William Ruckelshaus — and adds a fourth: “advance justice and equity.”

A hold on nominees

Despite support from the administration, a national office for environmental justice at EPA has a tough road ahead. Senate confirmation of an assistant administrator nominee to lead the office could take months, if it ever happens.

Sen. Cynthia Lummis (R-Wyo.) has stalled confirmation of those nominees due to an unresolved dispute between EPA and Wyoming over pollution controls for a coal-fired power plant in her state.

“She still has a hold on all EPA nominees,” Abegail Cave, a Lummis spokesperson, told E&E News.

In addition, Sen. Bill Cassidy (R-La.) has vowed to block EPA nominees over his frustration that the agency has not permitted carbon capture wells in Louisiana. Ty Bofferding, a Cassidy spokesperson, confirmed that there had been no change in the senator’s position.

While advocates are pleased that the administration continues to champion environmental justice, they worry that the cause’s critics will soon consolidate and push back.

“Once you really put it out there on blast, will that give the other side an opportunity to undermine it before it gets fully stood up?” Miller-Travis said. “In this toxic climate we are in, we will see.”