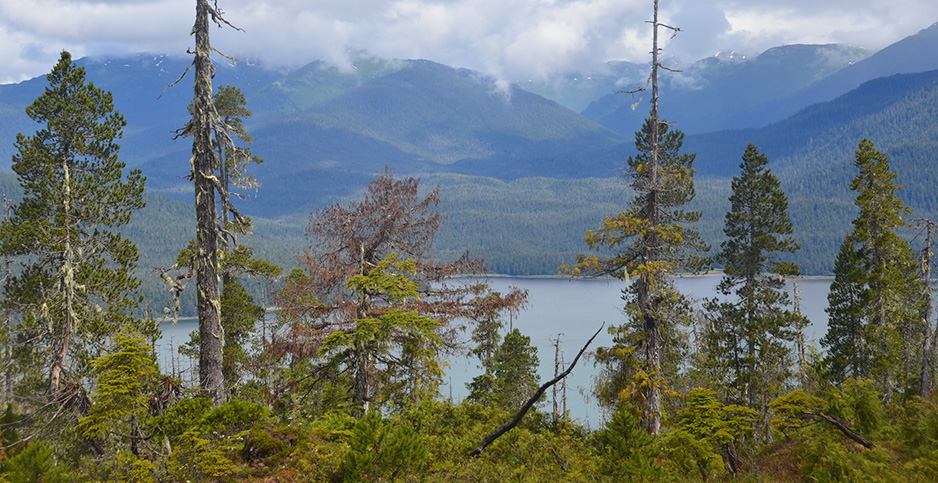 View of the Tongass National Forest in Alaska. Rob Bertholf/Flickr

The Biden administration said today it will "repeal or replace" the Trump administration’s rule that would have allowed road construction — and potentially more logging and other development — in the Tongass National Forest in Alaska.

The decision to revisit the so-called roadless rule for the nation’s largest national forest has been widely expected (Greenwire, Jan. 22).

Today’s announcement, included in a broad update of regulatory actions across the government, said a notice of proposed rulemaking could come in August, which would offer more details on the plans.

The Trump administration’s extended Tongass rulemaking included several alternatives other than a full exemption from roadless-area restrictions, in order to keep some areas protected while allowing development in others. The Trump plan lifted restrictions on 9.4 million acres of Tongass’ nearly 17 million acres.

One option for the Biden administration is to leave the rule in place as it was, which some environmental groups said they now expect.

Groups that fought against the exemption hailed the new announcement and said they’d press for a full reinstatement of protections for the forest.

"We appreciate this announcement and urge the administration to rescind the destructive Trump-era rule for the Tongass promptly," said Nicole Whittington-Evans, Alaska program director for Defenders of Wildlife.

The Alaska Wilderness League said the timber program on the Tongass has been a "money pit," with more than $1 billion in federal subsidies over 40 years to encourage cutting of old-growth forest.

"We applaud the Biden administration’s and the Forest Service’s commitment to addressing that rollback, but also want to make clear that a full reinstatement of roadless protections is a necessity and crucial to preserving America’s ‘Amazon’ and one of our most valuable assets in the climate fight," said Andy Moderow, Alaska director for the league.

Environmental groups point to the forest’s capacity to sequester carbon, as well as its unusual status as a large temperate rainforest that hosts a wide variety of wildlife.

Proponents of timber development say the vast majority of the Tongass would remain off-limits, both through wilderness-area protections and the Tongass land management plan that sets policies and timber harvesting targets.

The Agriculture Department has said that even with no roadless-area protections, timber harvests wouldn’t climb. Instead, the department has said, lifting the rule would simply allow forest managers to select certain areas — subject to environmental review — that could provide more cost-effective timber.

Rolling back the Trump administration’s action is sure to be criticized by Alaska’s congressional delegation and state officials, who hadn’t offered comment as of this morning. Sen. Lisa Murkowski (R-Alaska) had lobbied hard for a full exemption while President Trump was in office, saying it would help not only the timber industry but mining, hydroelectric generation and other businesses.

At issue is a 2001 regulation called the Roadless Area Conservation Rule, which applies to land on many national forests. The regulation has had a spotty history since the Clinton administration and was briefly lifted for the Tongass during George W. Bush’s presidency — only to be reinstated as a result of legal challenges.

The state of Alaska had petitioned the Trump administration to exempt both the Tongass and the Chugach National Forest. The Trump USDA chose to leave the rule intact in the Chugach — which generates little timber by comparison — and grant the request for the Tongass.

It was widely reported that the USDA made the decision after Trump had a conversation with Alaska Gov. Mike Dunleavy, a Republican supporter.