Biden rolls out new rules. Courts may torpedo them. 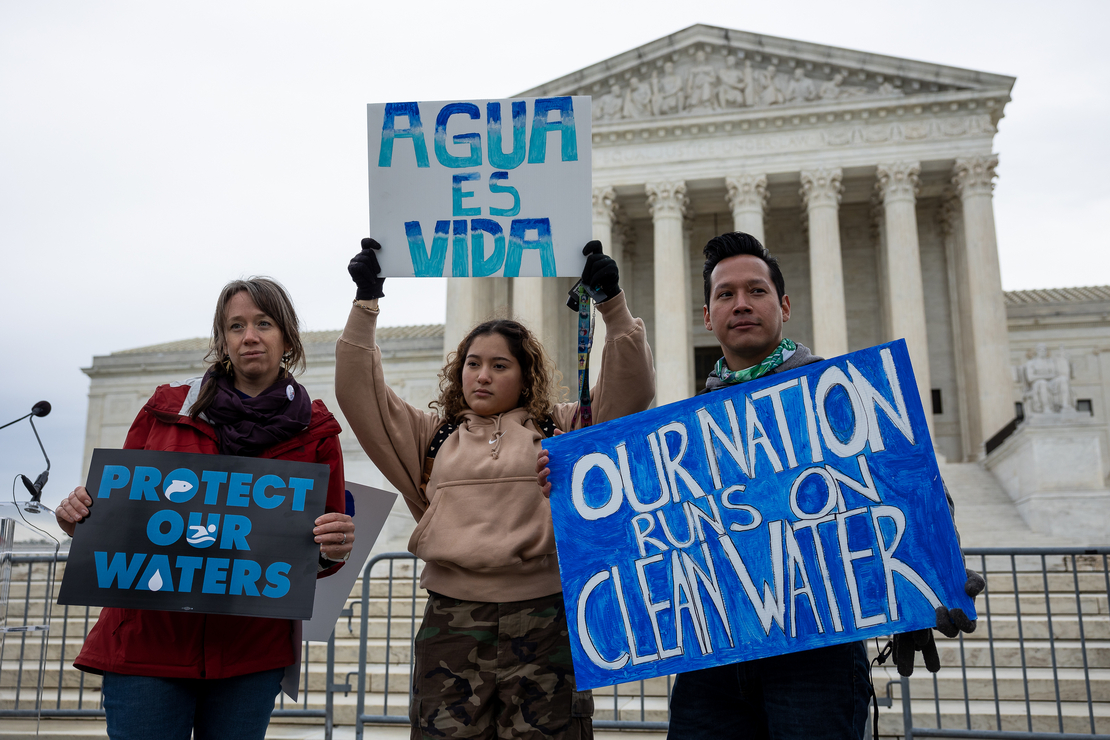 Environmental protesters outside the Supreme Court during oral argument in Sackett v. EPA on Oct. 3. From left, Clean Water for All Coalition Campaign Manager Kristine Oblock and Bethsaida Sigaran and Jaime Sigaran of American Rivers are pictured. Francis Chung/POLITICO

In the last days of 2022, EPA and the Army Corps of Engineers issued a brand-new water protection rule, one of the first of a new raft of Biden-era regulations that are expected to face a tough slog in the conservative-dominated courts in 2023 and beyond.

The Biden administration’s definition of what constitutes a “water of the United States,” or WOTUS, comes as the Supreme Court is considering a case that has the potential to narrow the category of wetlands and streams that are subject to Clean Water Act permitting requirements (Greenwire, Jan. 4).

Many other regulations will be subject to litigation that could eventually make its way to a high court that has in recent months demonstrated increased skepticism of federal regulation.

“This is a new conservative court,” said Peter Hsiao, a partner at the firm King & Spalding, “That is, a court in which the conservative wing now has a majority to continue to address the growth of the administrative state.”

Last term, the Supreme Court took one of its biggest swings against federal regulatory power in June in West Virginia v. EPA, a case that struck down the Obama administration’s power plant emissions rule for violating the “major questions” doctrine. The theory says that Congress must clearly state if it wants agencies to act on matters of “vast economic and political significance.”

Legal observers note that the Biden administration will release its rules under the watch of a Supreme Court that is willing to step in before agencies have completed their regulations. In the case of the WOTUS rule, the Supreme Court took the unusual step of granting the Sackett v. EPA case over the objections of the Biden administration, which had urged the justices to wait for the new regulation before jumping into the fray (Greenwire, June 13, 2022).

EPA and the Army Corps released the new WOTUS definition on Dec. 30. The Sackett ruling is expected by summer.

The court took similar action in West Virginia, which scrapped an Obama-era rule that had never taken effect — despite the Biden administration’s plans to replace it. EPA has yet to deliver the rewrite.

Rulings like West Virginia have in some instances appeared to spur action in Congress. In the Inflation Reduction Act, which passed in August and provided $369 billion in clean energy investments, lawmakers firmed up the key finding in the 2007 Supreme Court ruling Massachusetts v. EPA — that the agency has the power to regulate greenhouse gas emissions as air pollutants under the Clean Air Act (Climatewire, Aug. 24, 2022).

But it’s not realistic to expect more environmental legislation from Congress in 2023, said Hsiao. For one thing, Republicans have flipped control of the House. And beyond that, he said, lawmakers are meant to lay out the broad strokes of federal power in statutes and leave it to the technical experts at the agencies to figure out how to exercise their authority.

“To expect legislators to know the details and issue that directive has never been modus operandi,” he said.

Meanwhile, the Supreme Court has stopped applying the Chevron doctrine to give federal agencies leeway to interpret their regulatory authority under ambiguous statutes. The court’s most conservative members appear ready to do away with the doctrine altogether (Greenwire, Nov. 7, 2022).

Some legal scholars have called on the justices to take more definitive action on Chevron, noting that the doctrine is still being used by lower courts to uphold federal rules.

“While the Supreme Court has not deferred under Chevron in over six years, it remains silent on the constitutionality of the doctrine,” wrote Isaiah McKinney, a legal associate at the Cato Institute, in a recent blog post for the Yale Journal on Regulation.

“But the circuits are not following the Supreme Court’s quiet lead, and they continue to defer,” he continued. “It is time for the Court to clarify the issue and overrule Chevron.”

Taken together, the absence of Chevron deference and the emergence of the major questions doctrine articulated in West Virginia could usher in a new era of anti-regulatory Supreme Court rulings, some legal observers say.

Here are some Biden regulations that could test the boundaries of administrative law in 2023.

EPA and other agencies are expected to roll out a slate of rules aimed at tackling global climate change through a range of actions from tamping down vehicle emissions to changing financial disclosure rules.

Many of those regulations are expected to face challenges under the major questions doctrine (Energywire, July 7, 2022).

Republican-led states have even used the doctrine to go after the very methods federal agencies use to create climate rules. Two separate red-state coalitions — led by Louisiana and Missouri — have launched litigation against the Biden administration for using a higher value than the Trump administration for calculating the benefits of robust climate regulation.

So far, the lower courts have rejected major questions claims against the higher social cost of greenhouse gas estimates. And the Biden administration has yet to finalize its metric — although EPA has floated a figure as high as $190 per metric ton of carbon, up from about $1 under former President Donald Trump (Climatewire, Nov. 21, 2022).

Missouri and Louisiana could bring their challenges to the Supreme Court in the coming months.

Climate isn’t the only major issue EPA plans to tackle in 2023.

The Biden administration is also gearing up to mandate drinking water limits for two of the most notorious “forever chemicals” — the first regulation of its kind since 1990. The rule is expected to be one of the administration’s most meaningful steps toward curbing exposure to per- and polyfluoroalkyl substances, which have been linked to health issues like cancer and reproductive problems.

Narang of Public Citizen said he doesn’t expect the rule for the chemicals — PFOA and PFOS — to be subject to the same types of challenges as EPA’s climate regulations.

“Congress already gave EPA more than ample authority to deal with the threat from forever chemicals,” he said.

But the Safe Drinking Water Act will require the Biden administration to keep a close eye on the cost and feasibility of its PFAS rule, which could trigger significant upgrades at water utilities nationwide. And costs could trigger legal challenges from the entities that would bear them.

The Supreme Court will reach rulings in 2023 on at least two non-environmental cases that could have a big impact on water, air and climate regulation in the Biden era.

On Feb. 28, justices will hear arguments in Biden v. Nebraska, a battle over the administration’s plans to relieve up to $20,000 in student loan debt for eligible borrowers. Challengers of the policy has said it violates the major questions doctrine, and the court’s ruling in the case could more clearly define the legal theory (Greenwire, Dec. 5, 2022).

The justices could also issue a ruling in the immigration case United States v. Texas that could limit who can sue over federal policy. If the court adopts a narrower view of standing, it could potentially box green groups or blue states out of litigation over federal environmental rules.

The case, which deals with a state’s power to challenge Biden-era immigration enforcement guidance, could also birth new precedent on the power of lower-court judges to stop implementation of federal rules. A Supreme Court crackdown on broad lower court orders, known as nationwide injunctions, could prevent challengers from stopping environmental rules — or rollbacks — from taking effect during the early stages of litigation.

Rulings in the Nebraska and Texas cases are expected by summer.

If the federal government is handcuffed on environmental regulation, state officials may have to step in — that is, if the courts will let them.

In one case that’s currently before the Supreme Court, justices have an opportunity to place guardrails on state rules — such as those governing greenhouse gas emissions — if those regulations impede economic activity in other states.

During oral arguments on Oct. 11 in National Pork Producers Council v. Ross, justices seemed open to allowing pork farmers to pursue a dormant commerce clause challenge against a California animal welfare rule. They raised questions about the effect such a ruling would have on state-level requirements for vehicle emissions and other matters (Greenwire, Oct. 11, 2022).

The dormant commerce clause is an implicit prohibition in the Constitution against state actions that inhibit interstate trade.

Justices are expected to rule in National Pork Producers by summer.

Biden’s EPA is expected to propose its own power plant carbon rule in the coming months.

As the agency writes its new rule, it will have to contend with the Supreme Court’s findings in the June West Virginia decision, which struck down the Obama administration’s ambitious Clean Power Plan.

But the agency still has room to regulate the industry that contributes the highest level of carbon pollution, behind motor vehicles, Hsiao said.

“If you can’t regulate carbon emissions, you can regulate the things that go with carbon — sulfur dioxide, fuel usage, requirements for renewable fuel standards and low-carbon fuel standards,” he said. “There are other tools that are proxies for reducing the impact of climate change, all of which are at the disposal of the Biden administration and EPA.”

Among those tools is a reinstatement of the legal basis for EPA to regulate hazardous emissions from power plants. EPA has sent the final version of the Mercury and Air Toxics Standards for White House review, and it is expected to be issued soon (E&E News PM, Jan. 3).

As EPA and the Justice Department promulgate and defend the Biden administration’s environmental rules, agency officials will surely be thinking about the legal risks of each regulation, Hsiao said.

“My experience with EPA and the Justice Department is getting sued is a way of life,” said Hsiao, who worked at DOJ during the George H.W. Bush and Clinton administrations.

Still, he said he doesn’t expect the Biden administration to slow down its regulatory efforts, even as it faces an adversarial court.

“The net effect of their rules will still be to advance their environmental protection agenda,” Hsiao said. “They’ll just do it differently.”