Biden rushes to pick judges, but one major opening remains 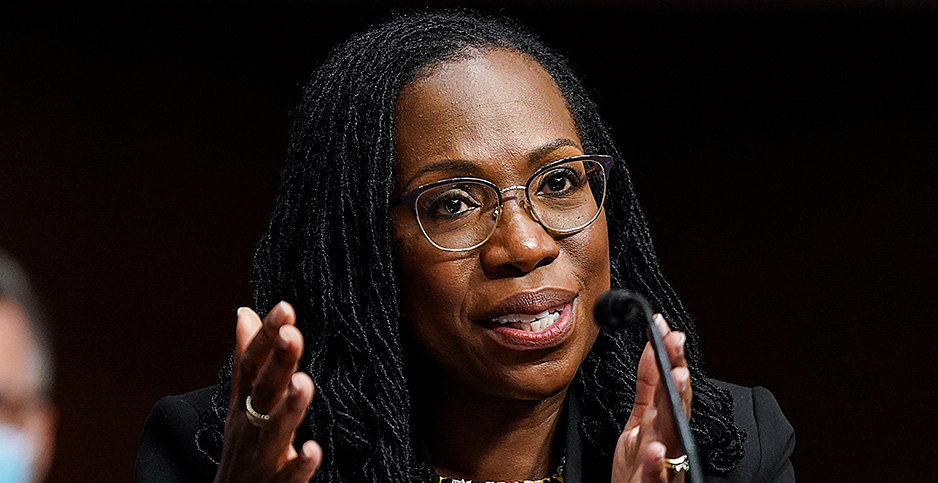 Judge Ketanji Brown Jackson during her confirmation hearings for the U.S. Court of Appeals for the District of Columbia Circuit. President Biden has a chance to tap a second judge for the powerful appeals court but has not yet put forward a nominee. Pool/Getty Images

More than six months into his term, President Biden has outstripped his predecessors on nominating judges, but one key vacancy on a powerful appeals court remains.

Judge David Tatel of the U.S. Court of Appeals for the District of Columbia Circuit announced in February that he would take senior status, a form of semi-retirement, as soon as Biden selects his replacement (Greenwire, Feb. 12).

About a month later, Biden tapped Judge Ketanji Brown Jackson to fill the D.C. Circuit seat vacated by Merrick Garland, who had just been confirmed as attorney general. But no nominee has been put forth for Tatel’s spot on the court, which is frequently the last stop for litigation over environmental rules.

Legal experts have chalked up the delay to Biden’s desire to bring on a judge with just the right experience and temperament to serve on the nation’s second-highest bench.

"Given Judge Tatel’s experience and reputation on the environment, that might be something they’re considering," said Christopher Kang, co-founder and chief counsel of the progressive judicial advocacy group Demand Justice.

Meanwhile, Biden has moved with record speed on other vacancies and currently has eight confirmed judges — more than any other recent president had at this point in his term.

Three of those judges are now sitting on federal appeals courts, which usually have the final say in legal disputes, except in the rare instance that a case makes its way up to the Supreme Court.

"In some ways, not having this nominee is a reflection of how well things are going in other circuits," said Kang.

While Biden’s search for a second D.C. Circuit nominee is not limited to Washington, it’s unusual for a Democrat to look outside the city when selecting judges for the court, said Kang. Republicans, on the other hand, have been willing to reach out to other geographic areas, as former President Trump did when he appointed Judge Justin Walker of Kentucky.

Walker is one of three judges Trump appointed to the D.C. Circuit during his four years in office.

If the past is prologue, Biden will fill the D.C. Circuit seat with a judge who will bring diversity to the role — in terms of both race and professional experience, said Russell Wheeler, a visiting fellow in the Brookings Institution’s Governance Studies Program and president of the Governance Institute, a nonpartisan think tank.

"We know darn well the kind of person he has been nominating, so there’s no reason to think he’s likely to stop that," Wheeler said of Biden.

One potential option is Judge Tanya Chutkan, who currently sits on the U.S. District Court for the District of Columbia, said Wheeler. Chutkan, who was born in Jamaica, has sat on the court since 2014 after being appointed by former President Obama.

Chutkan has presided over litigation involving Trump’s efforts to reduce the size of Bears Ears National Monument in Utah and other key issues.

Before becoming a judge, Chutkan worked in private practice and as a public defender in Washington.

Biden has pushed to place more former public defenders on the federal courts, which tend to be filled with corporate lawyers and ex-prosecutors.

If Chutkan or Amy Berman Jackson were elevated to the D.C. Circuit, that would also leave Biden a new D.C. District Court seat to fill. He has tapped Florence Pan, an associate judge of the D.C. Superior Court, for the seat Ketanji Brown Jackson vacated on the D.C. District Court.

Tatel’s move has created two opportunities for Biden to name judges to a court that is widely considered the second-highest bench in the nation.

Trump, who broke records by tapping more than 200 judges in four years, had three opportunities to select D.C. Circuit judges over the course of his administration.

But Biden’s efforts to fill the courts with his judges are limited by the number of vacancies that occur during his presidency. Trump came into office with the benefit of a backlog of vacancies that Senate Republicans had held open during the tail end of the Obama administration — including one on the nation’s highest court.

"Trump, of course, had a Supreme Court justice at this point," said Ilya Shapiro, a vice president of the Cato Institute.

During his four years in office, Trump had three Supreme Court justices confirmed — Neil Gorsuch in 2017, Brett Kavanaugh in 2018 and Amy Coney Barrett in 2020.

Progressive groups have called on Justice Stephen Breyer to step down from the Supreme Court while Biden is in the White House to create a vacancy and avoid the possibility of a Republican replacing another liberal justice, as Trump did when he chose Barrett to replace the late Justice Ruth Bader Ginsburg.

Barrett’s addition to the court brought the bench to a 6-3 conservative majority, stoking the ire of liberals who had called on Ginsburg to step down while former President Obama was in office.

At 82, Breyer is now the court’s eldest justice, and Senate Minority Leader Mitch McConnell (R-Ky.) has said he is prepared to block Biden from installing a Supreme Court justice in 2024 if the GOP wins back the chamber. Democrats currently hold a narrow Senate majority.

McConnell stonewalled hearings for Garland, whom Obama had chosen to replace the late Justice Antonin Scalia in 2016. Senate Republicans said they would not move forward with a Supreme Court nominee after the primary election had begun. Trump later won the election and tapped Gorsuch.

Republicans allowed Trump to move forward with Barrett’s nomination in 2020, even though the general election was already underway.

Breyer appears to be in better health than Ginsburg was during the last years of her life, court observers say. He recently told CNN that he hasn’t decided when he plans to retire.

Justices traditionally announce their retirements at the end of Supreme Court terms, although they are not bound to do so. The most recent term ended July 1.

"Just because he didn’t step down at the end of the term doesn’t mean he couldn’t," said University of Richmond law professor Carl Tobias. "He may. It’s just hard to tell."

Biden has faced pressure from liberal groups to increase the number of Supreme Court justices — a step he appears unlikely to take.

But he has convened a bipartisan commission to study the courts and to suggest whether new seats should be added, among other recommendations. The commission is expected to issue a report later this year, although observers have questioned whether the group is capable of driving radical change in the courts.

"I’m very skeptical about what the commission is going to be able to accomplish," said Kang of Demand Justice, who testified during one of the commission’s recent hearings.

The commission’s recommendations could, however, create new momentum behind legislation to create new judgeships.

A new House bill, for example, would create more than 200 new positions in federal district courts across the country. There have been talks of staggering new openings across administrations to avoid the chances that one political party would have the ability to fill all the new openings.

The number of federal district court judges has not increased since 2003, despite dramatically rising caseloads.

The release of the bipartisan commission’s report, said Shapiro of the Cato Institute, will be "a key moment in this discussion."Ju