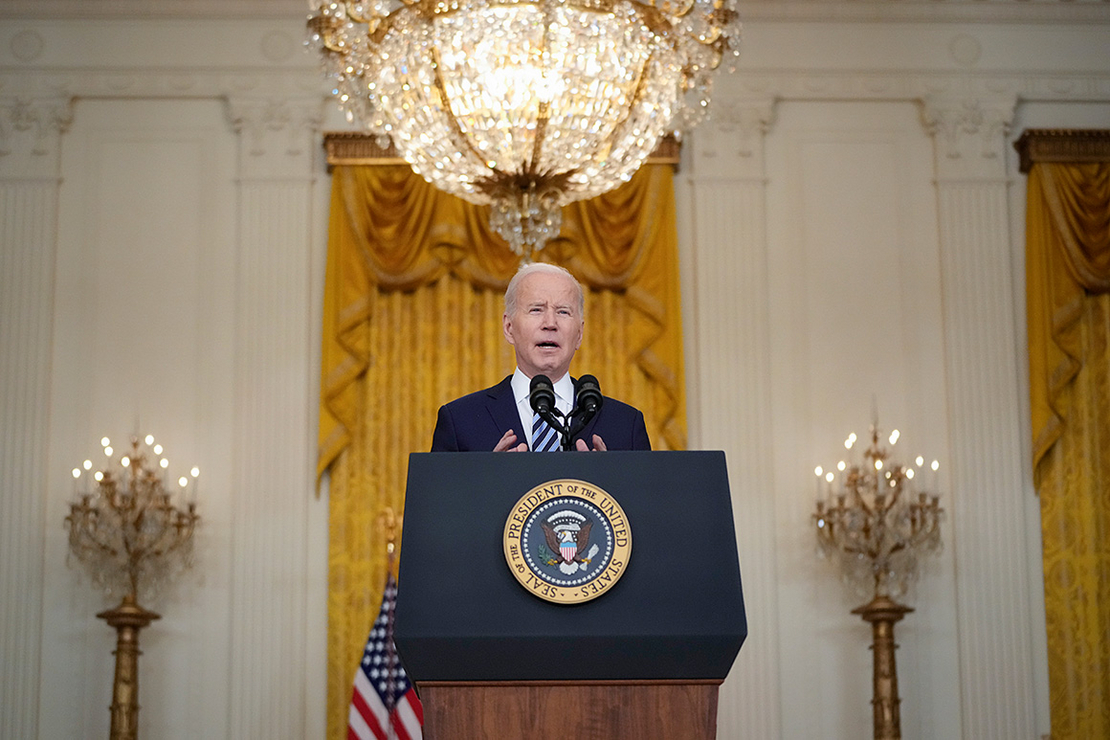 President Biden during remarks at the White House this afternoon. Drew Angerer/Getty Images

President Biden today announced a new round of sanctions on Russia after President Vladimir Putin’s invasion of Ukraine but said the penalties are intended to skirt impacts to the energy sector.

“In our sanctions package, we specifically designed to allow energy payments to continue. We are closely monitoring energy supplies for any disruption,” Biden said in a speech from the White House this afternoon. “We’ve been coordinating with major oil-producing and -consuming countries toward our common interest to secure global energy supply.”

Biden nonetheless said the sanctions from the U.S. and its allies would be “severe.” They penalize four major Russian banks, including VTB, Russia’s second largest, freezing their American assets. The sanctions will cut off major Russian state-owned companies, penalize additional Russian billionaires and restrict access to technology exports, Biden said.

“Putin is the aggressor. Putin chose this war,” Biden said. “And now he and his country will bear the consequences.”

The president’s speech came shortly after press reports that Russia had taken control of the Chernobyl nuclear power plant, the site of the worst nuclear disaster in world history situated north of Kyiv near the border with Belarus.

Biden and the European Union have stopped short of cutting Russia off from SWIFT, the global banking payment system. Ukrainian leaders have been asking nations to ban Russia from the system, which could impact its oil and gas industry. Biden said it remains an option but “that’s not the position that the rest of Europe wishes to take.”

“The sanctions that we have proposed on all their banks have equal consequence, maybe more consequence than SWIFT,” Biden said.

The U.S. and other nations imposed an initial round of sanctions on Russia earlier this week targeting Russian banks and oligarchs. Germany has also suspended certification of the Nord Stream 2 natural gas pipeline.

Biden said he spoke to Ukrainian President Volodymyr Zelenskyy last night, as the full-scale Russian invasion began, to assure him that the U.S. would support the country and offer humanitarian aid.

Leaders of the Group of Seven are in agreement to “limit Russia’s ability to do business in dollars, euros, pounds and yen,” Biden said.

He also said the U.S. would send additional troops to support NATO allies in Eastern Europe but reiterated that they would not get involved on the ground in Ukraine.

But Biden said his administration would be “prepared to respond” if Russia were to launch cyberattacks against U.S. companies or critical infrastructure.

Biden acknowledged the nation could feel some economic impacts from sanctions, but he sought to reassure Americans already dealing with skyrocketing gas prices. The Brent crude oil benchmark surged over $100 per barrel earlier today before falling close to $98 this afternoon (Greenwire, Feb. 24). The West Texas Intermediate benchmark sat just over $90 at publication time.

“American oil and gas companies should not exploit this moment to hike their prices to raise profits,” Biden said.

The administration is working with major oil consumers to coordinate releases from strategic petroleum reserves to ease prices, Biden said.

“The United States will release additional barrels of oil as conditions warrant,” he said.

“I will do everything in my power to limit the pain the American people are feeling at the gas pump. This is critical to me,” Biden added. “But this aggression cannot go unanswered.”