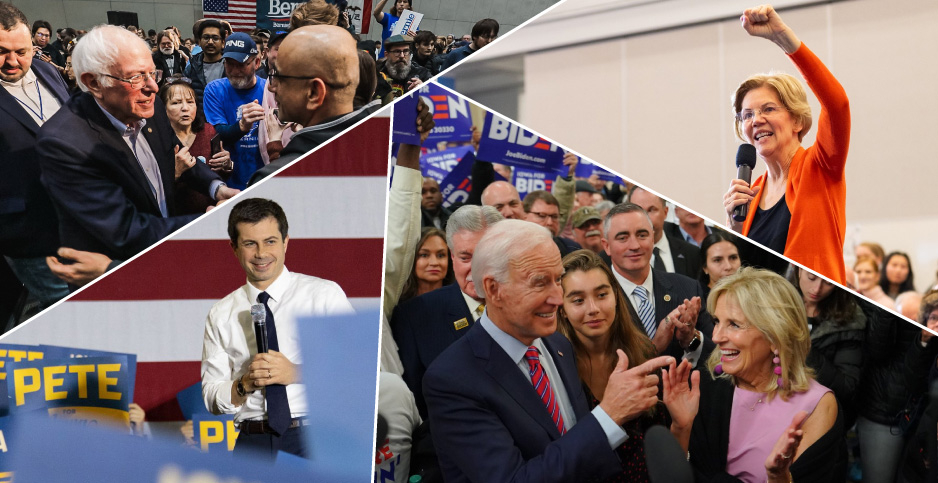 The candidates have tried to stake out unique identities in the race, ranging from staunch progressives such as Sanders and Warren to more establishment-favored options like Biden and Buttigieg, as well as candidates including Yang who don’t fit easily into molds.

Up for grabs are Iowa’s 41 delegates to the Democratic National Convention later this year, plus eight "unpledged" delegates who can choose whatever candidate they want. Hopefuls who do not receive 15% support in a local precinct won’t get state-level delegates.

Who wins will be anyone’s guess.

The Des Moines Register was expected to release a final poll over the weekend. But the paper and its partner CNN decided against releasing the installment because of concerns over how a question was posed.

Recent polling has shown that Biden — widely seen as the leading establishment candidate — and Sanders — the leading progressive candidate — are likely to get the highest number of delegates in Iowa, while Warren and Buttigieg are also expected to have strong showings.

A CBS News/YouGov poll published yesterday had the two top candidates tied with 25% of the vote.

The most recent poll from Emerson College released yesterday had Sanders winning 28%, followed by Biden with 21%, Buttigieg with 15% and Warren at 14%.

The 2020 election cycle has been notable for the attention climate change and related environmental and energy issues have received.

While climate wasn’t the most frequent topic of the campaign, nearly every major candidate has rolled out plans to aggressively confront the issue, with proposals such as a federal takeover of the nation’s electric grid, putting a price on carbon emissions and banning hydraulic fracturing nationwide.

Sometimes the candidates have directly opined against their competitors’ climate plans. Biden, for example, criticized Sanders’ plan at a recent campaign stop, saying his goal of getting the nation’s greenhouse gas emissions to net zero by 2030 is unrealistic.

"Not a single, solitary scientist thinks it could work," Biden told a voter in an exchange caught on camera. "You cannot get to zero emissions by 2030. It’s impossible."

Sanders said days later that Biden is "wrong" and released a letter signed by 57 scientists endorsing his plan.

Candidates have also sought to bring attention to climate change in discussions about other policy areas, to argue it is relevant beyond environmental concerns.

Sanders and Steyer said during an Iowa debate last month that they oppose the United States-Mexico-Canada Agreement on trade because it doesn’t do enough to fight climate change.

"I would not sign this deal, because if climate’s your No. 1 priority, you can’t sign a deal — even if it’s marginally better for working people — until climate is also taken into consideration," Steyer said.

The presidential hopefuls have been using recent days to give their closing arguments to voters, after making frequent visits to the Hawkeye State during the last year, despite the ongoing Trump impeachment trial that has kept senators stuck in Washington.

"Imagine all the progress we can make in the next four years," Biden said in a television advertisement released in Iowa last week, telling voters to "imagine a world where America leads on climate change," among other goals.

"What we imagine today, you can make a reality. But first we need to beat Donald Trump," said the former vice president.

A Warren ad said last week, "When someone shows you who they are, believe them. Trump’s life taught him how to get rich on the backs of others. Elizabeth Warren will be a president who works for you."

The former mayor mentioned the need to "reverse inaction on climate change, which has brought us to the brink," as a priority for winning.

Caucuses are unique, in-person events in which people stand in areas of a room to indicate their preferences and try in real time to convince others to join them. The first primary election for president will be in New Hampshire on Feb. 11.

In all, the national convention will have 3,979 delegates, and the first candidate to get a majority will become the party’s choice to take on President Trump in November’s election.

While the number of delegates available in Iowa is small compared with the entire primary season, its place as the first nominating contest of the campaign gives it an outsize role.

Candidates who do well often gain momentum for the rest of the election, while others may significantly change strategies or drop out altogether.

The Republican Party will also hold its Iowa caucus today, but with Trump’s strong support in the GOP, he is expected to easily win the caucuses and the party nomination. Nonetheless, voters will be able to pick among Trump, former Massachusetts Gov. Bill Weld and former Rep. Joe Walsh of Illinois.