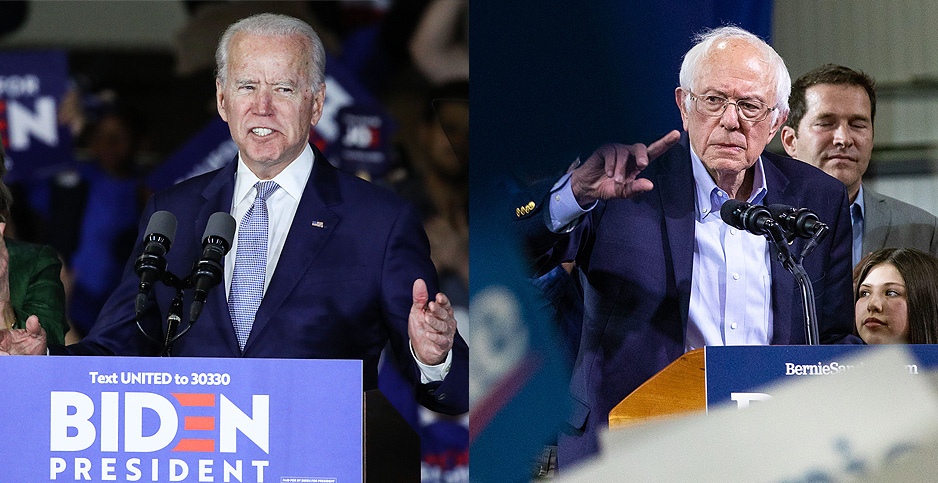 Two weeks ago, Joe Biden was all but written off.

This morning, the former vice president wakes up as the likely Democratic nominee for president, after having won the vast majority of Super Tuesday states on the biggest day of the 2020 primary cycle.

Sen. Bernie Sanders won the biggest prize of them all in California, along with Colorado and Utah and his home state of Vermont.

Both men also picked up delegates in various states they didn’t win, helping pave their way toward the Democratic National Convention in July. And they both trumpeted their green credentials during victory speeches.

As of early this morning, Biden had a narrow lead in the delegate count, 371-301. These numbers are expected to change as more results come in, however.

The night did not go well for Michael Bloomberg, the former mayor of New York City and funder of environmental causes, who had invested hundreds of millions of his own money into a late entry in the primary process.

He did not win a single state. He did, however, win the primary in the U.S. territory American Samoa.

Various news outlets, including the Associated Press, were reporting last night that Bloomberg planned to reassess his campaign today.

Sen. Elizabeth Warren likewise did not win a single state. She came in third in her home state of Massachusetts, behind Biden and Sanders.

Warren did, however, win some coveted delegates by reaching the 15% threshold in several states.

Rep. Tulsi Gabbard of Hawaii, the only other remaining candidate in the race, did win a single delegate by capturing more than 15% of the vote in her native American Samoa.

For his part, the man they all want to defeat let them know he was watching. President Trump took aim at both Warren and Bloomberg in late-night tweets, telling the former to go enjoy a beer with her husband, while commenting that Bloomberg had just wasted $700 million.

It was clear from almost the minute the polls closed on the East Coast that it was going to be a good night for Biden.

Virginia, a state that has been trending blue in recent presidential elections, was called immediately for the former vice president.

Biden won 53.3% of the vote, compared with Sanders’ 23%. Bloomberg, who spent millions of dollars in television and radio ads in the Old Dominion, came in a distant fourth at 9.7%.

Biden also won Massachusetts, the home state to Warren and the neighboring state to Sanders. Biden’s win here was a surprise, given that he had spent no money advertising in the state and hadn’t campaigned there.

His victory in Texas was perhaps the biggest upset of the night. In the days leading up to it, Sanders had been strongly favored. With 97% of the votes counted in the Lone Star State, Biden won 33.4% to Sanders’ 29.9%.

Biden took to the stage in California after 10 p.m. EST and declared victory in front of a large and loud group of supporters.

"Things are looking awfully good," Biden told the crowd. In a speech filled with a desire to heal divisiveness, he also said he would make sure the United States gets back into the Paris climate agreement and pledged to "keep the water safe."

He thanked his formal rivals who had come out and endorsed him since his victory in the South Carolina primary Saturday.

Sen. Amy Klobuchar of Minnesota, who quit the campaign Monday, was instrumental in helping him carry Minnesota, a state Sanders won four years ago against Hillary Clinton.

Biden also thanked Rep. Jim Clyburn (D-S.C.), whose endorsement last week ahead of the South Carolina primary was considered pivotal by many inside and outside the state.

Later, the Biden campaign called out Trump. "You lost tonight, @realDonaldTrump. Democrats around the country are fired up. We are decent, brave, and resilient people. We are better than you. Come November, we are going to beat you," the campaign tweeted.

Maine was the only state that remained too close to call this morning, but Biden had a slight lead.

For his part, Sanders remained confident when he addressed his supporters in Essex Junction, Vt., before all the results were known.

Making note that he had won his first race for Burlington mayor 31 years previously to the night, Sanders vowed to move ahead and said his campaign is one of diversity and inclusion.

After mentioning his efforts on Medicare for All and improving education, he took aim at the environment.

"Given the existential crisis of climate change … we are saying to the fossil fuel industry that their short-term profits are not more important than the future of our country and the world," he said.

But one of his most visible surrogates, Rep. Ilhan Omar (D-Minn.), took subtle aim at Warren and other progressives after Sanders’ disappointing finish in Minnesota.

"Imagine if the progressives consolidated last night like the moderates consolidated, who would have won? That’s what we should be analyzing. I feel confident a united progressive movement would have allowed for us to #BuildTogether and win MN and other states we narrowly lost," she tweeted.

In an early morning tweet, Trump also called out Warren saying she was "selfish" because she had "Zero chance" at winning.

The next big races include Michigan on March 10 and Florida on March 17. Warren and Bloomberg wasted no time targeting these voters.

Warren held a town hall in Detroit. She took questions from the audience, including a woman who identified herself as from Flint. She told Warren how the water is still polluted and asked how the Massachusetts senator would fix it.

"What are you going to do to help preserve our natural resources and get back water, clean water, back as a natural human right? Because we are still paying for water that we cannot use," the woman said, with loud cheers in the background.

Warren, echoing themes she has emphasized throughout the campaign, said the water problem came about because the government was working more for big companies and not the people.

"We have a government that works great for giant oil companies that want to drill everywhere, just not for the rest of us who see climate change bearing down upon us," she said.

For his part, Bloomberg did not sound like a candidate who was dropping out when he addressed a crowd in West Palm Beach, Fla.

He told voters there that if he is at the top of the ticket in November against Trump, the Democrats will win the state. And he repeated more than once that his motto means addressing the environment.

"I am running to beat Donald Trump and to start rebuilding our country and start getting things done," he told a loud crowd. "I mean, really big, important things, like fighting gun violence and fighting climate change."

Bloomberg added again later that "getting it done means making America a global leader in the fight against climate change."

The next debate for the remaining candidates is scheduled for March 15 in Phoenix and will be hosted by CNN and Univision. The Democratic National Committee has yet to announce the qualifying rules for which candidates can take part.