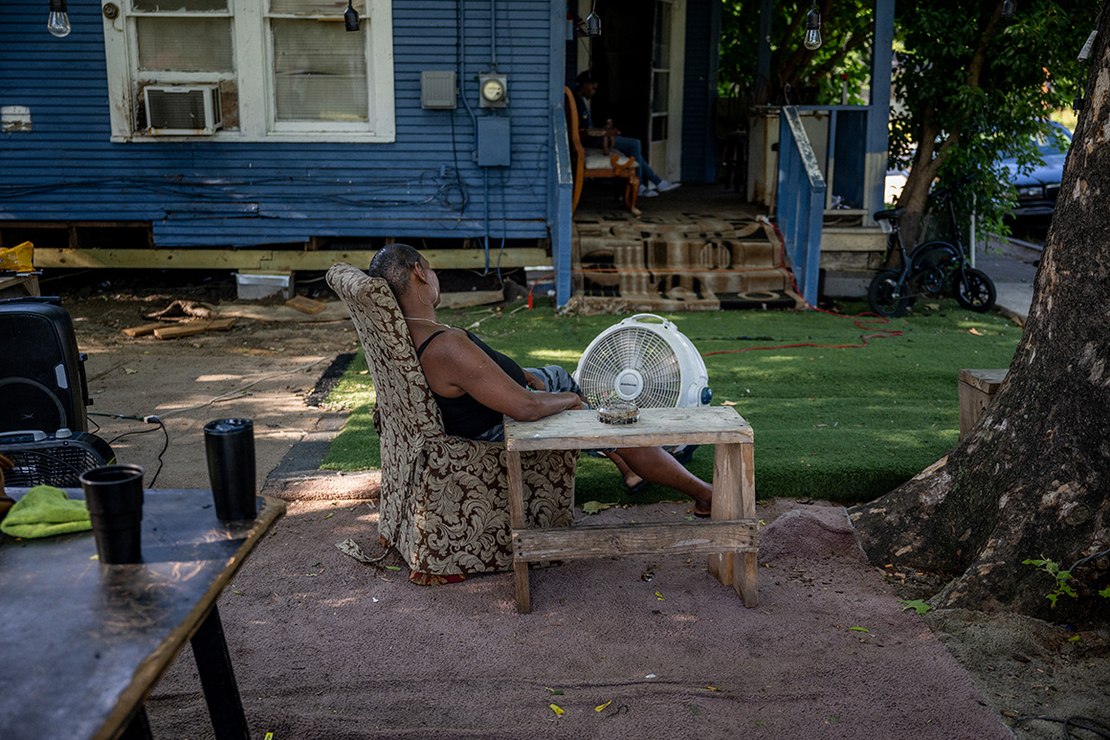 Yvette Johnson, 54, sat next to a fan outside of her family's home during a heat wave last month in Houston, Texas. President Joe Biden is trying to revive his flailing climate agenda. Brandon Bell/Getty Images

Stymied in Congress by Sen. Joe Manchin (D-W.Va.), Biden is considering whether to declare a national emergency on climate. Such a move would grant the White House a freer hand to reshape supply chains, international trade and energy markets.

In practice, though, the White House faces a balancing act between climate executive action and Biden’s other top priorities. Many of the emergency powers available to Biden would threaten his near-term efforts to lower gasoline prices and counter Russia’s war in Ukraine.

How Biden will resolve those trade-offs is an open question among Democrats and their allies.

In recent days, more Democrats have embraced the climate emergency option, said Rep. Earl Blumenauer (D-Ore.), a longtime champion of the option. He said they don’t want to spend the summer “fumbling along” and waiting for climate legislation.

“It’s clear this doesn’t need to be just an arrow in the quiver,” Blumenauer said. “This can be something that the administration can proceed with because it can happen quickly.”

Biden has to make two choices. The first is whether to declare a climate emergency at all; the second is what to do with that declaration. Progressives are offering the White House a menu of emergency powers ranging from expediting EPA regulations to restricting fossil fuel financing across the globe.

In a sign of how much remains undecided, the White House preempted a climate speech Biden is scheduled to deliver today. White House press secretary Karine Jean-Pierre said the president would not make any emergency declaration this week.

“We think it’s a live conversation,” said Jamal Raad, executive director of Evergreen Action. Biden doesn’t have to present his full plan today, Raad added, but he should begin outlining his next steps. That includes building an aggressive political case for restricting fossil fuel development while gas prices remain high.

Ending fossil fuel leasing on public lands — a campaign promise of Biden’s — is among the most discussed options, along with using the Defense Production Act to surge capacity to renewable energy manufacturers. Climate hawks also want Biden to use emergency powers to reject individual oil and gas projects, like the pending Willow project in Alaska.

Although gas prices remain high, Democrats have coalesced around an argument that Biden could use emergency powers to ease inflation, at least in the long term.

“We have to realize that there’s nothing that can be done for new infrastructure today that will affect those high gas prices,” Sen. Jeff Merkley (D-Ore.) told reporters yesterday. “The best way to address this not happening in the future… is to end our addiction to oil.”

More directly, some emergency options could even boost the supply of fossil fuels on the U.S. market: Biden could restore the ban on oil exports that was lifted in 2015. The president has the authority to restore the ban on a year-by-year basis, according to the Center for Biological Diversity.

But U.S. energy exports have emerged as an economic lifeline to Europe in the wake of Russia’s invasion of Ukraine. One of Biden’s top international priorities is weakening Russia, especially by degrading the economic power of its energy exports. Cutting off Europe from U.S. fossil fuels could sink that effort.

Jean Su, energy justice director at the Center for Biological Diversity, said the White House isn’t just deciding which powers to use or not use; it’s also deciding how to sequence them. Some should come immediately, like an end to oil and gas leasing on public lands, she said, while others might make more sense later.

“He can roll them out in a way that is intentional and smart,” she said, rather than a “suicidal” pulse of declarations all at once.

Politics aren’t the only constraints Biden faces. Funding, legal challenges and even staffing capacity could limit the reach of a climate emergency declaration.

“It’s not that emergency powers can allow him to do whatever the hell he wants,” Su said, adding that Congress retains ultimate control over things like funding.

But Democrats and their allies are bullish on their chances.

Part of their confidence comes from an unlikely source: former President Donald Trump.

In 2018, Trump used national security powers to impose tariffs on steel and aluminum. In 2019, Trump declared an emergency in order to redirect federal funds to border wall construction. And in 2020, Trump used the Defense Production Act to boost medical supplies as well as clamp down on price gouging.

Each time, courts either sided with Trump or declined to review the cases, said Todd Tucker, director of industrial policy and trade at the progressive Roosevelt Institute.

“This is really recent Supreme Court precedent,” he said. “The sweet spot is the combination of an emergency declaration and flexible appropriations.”

The Defense Production Act, for instance, could allow Biden to tap into congressional appropriations that have emergency provisions, like some Defense Department programs.

Biden could also possibly raise funds through government corporations that already have congressional authorization to borrow money on private markets, like Fannie Mae or the Tennessee Valley Authority. That could allow him to offer more incentives for installing heat pumps, for example, without relying on congressional appropriations, Tucker said.

It allows the president to override the contracts governing supply chains, Tucker said. If a solar panel manufacturer is having trouble sourcing high-quality glass, Biden could require glass suppliers to redirect their orders to the solar company.

That’s such a powerful tool, Tucker added, because the law doesn’t allow litigation to stop it.

“The really interesting thing about the DPA is that, built into it, is that everyone is immunized from any type of lawsuit for complying with one of these orders. So you literally can’t sue,” he said. “There’s literally no remedy in U.S. law.”

But experts warned that Biden might run into trouble with other emergency powers.

In March 2020, as the coronavirus pandemic spread to the United States, Trump declared a national emergency under the Stafford Act, the law that triggers federal disaster aid to states.

Trump and Biden have used the declaration to funnel $52 billion in disaster aid to states and U.S. territories to reimburse for pandemic-related costs, according to an E&E News analysis of federal spending records. The money comes from the Federal Emergency Management Agency’s disaster relief fund, which typically helps states recover from events such as floods, tornadoes and wildfires.

Trump’s decision marked the first time a president had used the Stafford Act to give disaster aid to states for a pandemic. And it represented an expansive view of the law. His action “changed the scope of the statute and the agency,” the Congressional Research Service wrote in a February analysis, referring to FEMA.

But as Carlos Martín of the Brookings Institution noted in an email to E&E News yesterday, “Trump didn’t meet much resistance politically or statutorily since everyone wanted relief and assistance.”

In addition to legal obstacles, Biden could face financial and political barriers to using the Stafford Act for a climate emergency.

The disaster fund has $25 billion available but is projected to have just $8.2 billion by the end of the current fiscal year, on Sept. 30, according to the latest fund report. Congress routinely replenishes the fund when the balance gets low, but lawmakers might resist adding tens of billions of dollars for a climate emergency.

In addition, the federal government gives states disaster aid only if a governor asks for it and submits a request showing that a specific disaster has generated substantial recovery costs. Republican governors may resist applying.

“I feel like Stafford wouldn’t be the channel” for a climate emergency, said Martín, who is an expert on disaster policy. The National Emergencies Act and the Defense Production Act “probably have more latitude in terms of oversight and would have more grounding.”

There’s no indication that emergency powers would get the United States anywhere close to the emissions cuts that would have been achieved by the clean energy tax credits in the stalled reconciliation bill, said Michael O’Boyle, director of electricity policy for Energy Innovation, a think tank.

Absent that major and unprecedented investment of at least $300 billion — the amount Democrats discussed before Manchin killed the bill — executive powers under a climate emergency still won’t unlock that sort of transformative action.

“There’s no sugarcoating this missed opportunity that having no deal on climate presents,” he said. “We need to invest a lot of money in new infrastructure in order to reduce emissions 50 percent below 2005 levels by 2030.”