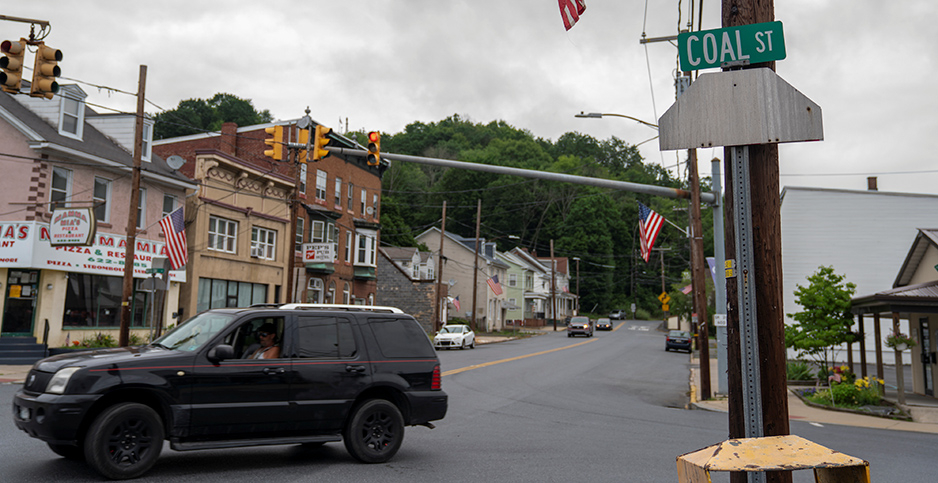 In his climate change executive order, President Biden directed federal agencies to form a working group to come up with a plan to "revitalize the economies of coal, oil and gas, and power plant communities." Pictured is a car turning the corner at Coal Street, Pottsville, Pa., in July 2020. Dane Rhys/Reuters/Newscom

As he signed executive orders meant to turbocharge the country’s shift away from fossil fuels, President Biden instructed the federal government to explore how to find new ways to ramp up economic activity in communities that have long depended on mining coal, drilling for oil and gas or generating electricity.

The creation of the interagency working group came in a wide-ranging executive order that many expected would include a moratorium on coal leasing on public lands, a measure absent even as the president mandated an indefinite pause on oil and gas leasing. That omission may be as much a recognition of the ailing coal industry’s diminished appetite for new leases as it is a gesture to coal communities that mistrust many Democrats in Washington.

While many advocates said the federal focus on helping struggling regions is necessary, others cautioned that more input from people in communities is necessary to truly address the profound economic challenges they face. They also emphasized that, eventually, the Biden administration will need to find federal resources to put into the effort.

In a speech yesterday at the White House, Biden said his administration intends to find ways to invest in power plant towns, coalfields and oil patches to create high-paying union jobs in other sectors.

Projects that plug orphan oil wells and clean up abandoned coal mines could have the twofold benefit of reducing greenhouse gas emissions and facilitating growth in fields like tourism, the executive order says.

"We’re never going to forget the men and women who dug the coal and built the nation," Biden said in a news conference at the White House. "We’re going to do right by them. Make sure they have opportunities to keep building the nation in their own communities and getting paid well for it."

Economic development groups said the order is a step in the right direction for coal mining areas. In central Appalachia, where coal has historically been the dominant industry, counties have seen a steep drop in tax revenue as a result of coal’s downturn, which many believe has also contributed to the rise in opioid addiction in the area.

A major concern in coal communities is that few in Washington — especially Democrats — listen to people working in the industry, said Phil Smith, a spokesperson for the United Mine Workers of America labor union. He excluded Sen. Joe Manchin (D-W.Va.) and a handful of House members from that criticism.

The working group should "make a legitimate and sustained effort to hear what the workers, families and other people in the affected areas have to say — even if it makes them uncomfortable," Smith said.

Brandon Dennison, the CEO of a Wayne, W.Va.-based business incubator, agreed with taking a ground-up approach.

His organization, Coalfield Development, focuses on social enterprises, such as rehabilitating abandoned mine land for agricultural use. The group is also developing cabins along the Hatfield-McCoy all-terrain vehicle trail system, which is southern West Virginia’s fastest-growing economic asset, Dennison said.

He sees the key to revitalizing communities heavily reliant on fossil fuel industries as creating diverse economies around sectors like renewable energy, tourism and technology.

"I think the job of this task force is to find what’s already working on the ground and pump flexible resources into those solutions," said Dennison, whose group has previously gotten funding from federal entities like the Appalachian Regional Commission.

They hope Biden’s working group will take one of their recommendations: to create a new federal office with staff members dedicated to facilitating a transition in coal country.

Smith, with the United Mine Workers, said Biden has plenty of work to do to fulfill his promise to workers in fossil fuel industries.

"If there is to be a path forward that replaces the kind of high-quality, high-paying jobs union miners and utility workers enjoy now, there must be more than just a nod to the potential for them to be union jobs," Smith said.

Miners make an average of $31 per hour and can earn $100,000 annually with overtime pay, according to UMWA. Without fundamental changes to labor law, such as those in the "Protecting the Right to Organize Act," Smith worries former fossil fuel workers will make half as much with few benefits in other fields.

Now would be a good time for Congress to pass the "RECLAIM Act," Kay said. Sponsored by Rep. Matt Cartwright (D-Pa.) last Congress, H.R. 2156 would expedite $1 billion in mine cleanup spending for projects that prioritize economic growth.

The idea stems from the Obama administration’s Power Plus Plan as part of its 2016 budget proposal. Previous versions of the bill have stalled despite bipartisan backing (E&E Daily, July 17, 2020).

Rep. David McKinley (R-W.Va.), the leader of the Congressional Coal Caucus, has co-sponsored the "RECLAIM Act." But in a statement yesterday, he blasted Biden’s executive order.

"The people who live in communities across the country, from coalfields of West Virginia to the oil patch of New Mexico, are just collateral damage. No window dressing of a working group to help these areas in the transition can change that," he said.

Manchin said he is focused on advancing energy technologies, not eliminating power sources. He committed to ensuring that the administration reinvests in areas that have lost fossil fuel jobs to ensure "that the burden of any acceleration in already changing markets is not unduly placed on these communities."

The coal leasing moratorium that wasn’t

Jeremy Nichols, climate and energy program director at WildEarth Guardians, praised Biden for taking such strong action on climate, but he wondered why the executive order left out a coal leasing ban.

"To be clear, we’re disappointed. It is a bit confounding that they didn’t restore the Obama-era moratorium. That seemed like a no-brainer to us," Nichols said.

Republican Rep. Liz Cheney of Wyoming, the top coal-mining state, today introduced a bill to block a coal leasing ban in case one does arrive.

Leases on federal land accounts for a large portion of U.S. coal production. Mines in the Powder River Basin of Wyoming and Montana alone make up about 40% of the nation’s total annual production.

The Obama administration’s so-called war on coal was largely a war on demand, not supply (Greenwire, Jan. 21). The Interior Department at that time leased more coal than any other administration: 2.2 billion tons.

Under pressure from activists, former Interior Secretary Sally Jewell issued a leasing ban in 2016 to give the department breathing room to assess the federal coal program, including royalty rates and impacts on the environment.

McCarthy cited a similar reason for the Biden administration’s decision to halt oil and gas leasing yesterday. She added that coal would be "in the mix" when it comes to evaluating Interior’s leasing strategy.

President Trump’s Interior Department lifted the moratorium in 2017, but companies’ interest in mining more federal coal has since faded due to changing power markets. Nichols noted that Interior has approved at least four leases during the last year in North Dakota, Colorado and Utah.

Days before Trump took office in 2017, Interior published a report that could be a template for Biden. It recommended royalty rate hikes and emissions offsets and considered a permanent leasing ban.