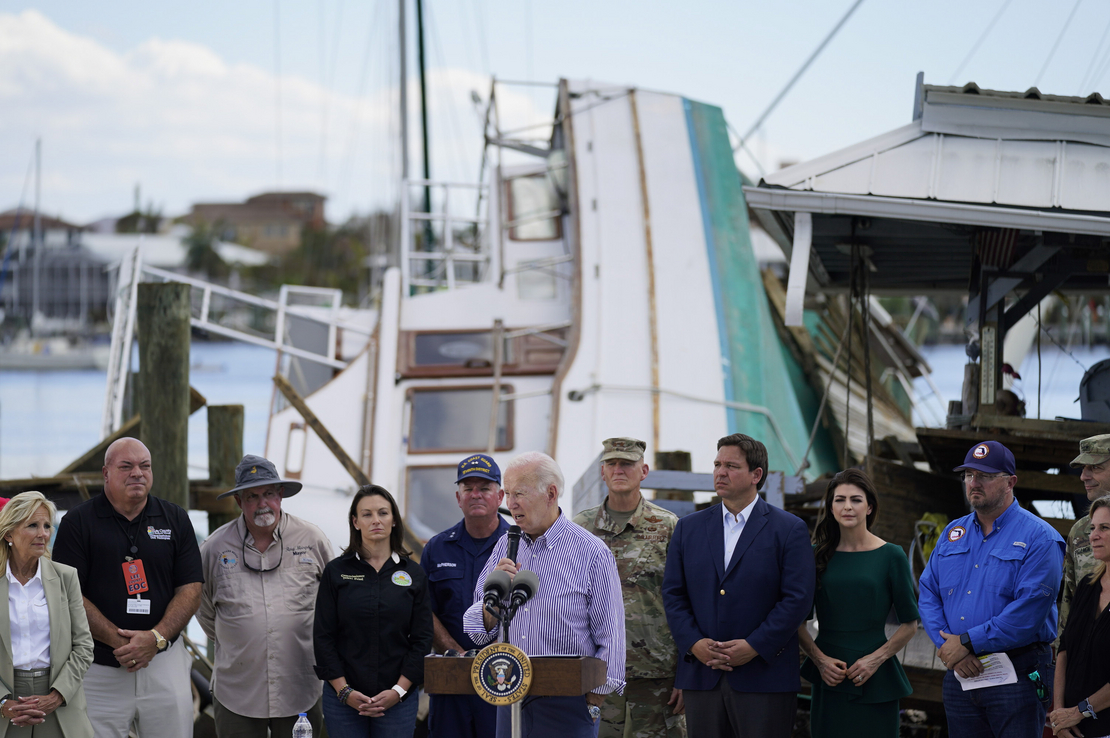 President Joe Biden has portrayed himself this week as a leader on climate adaptation while visiting Puerto Rico and Florida in the wake of deadly hurricanes that crushed homes and inundated neighborhoods.

But his tours have also raised questions about how his administration, and Congress, is preparing the country for the sharpening impacts of hurricanes, wildfires and flooding that cause roughly $100 billion in damages every year.

In Fort Myers, Fla., on Wednesday, Biden noted that newer homes that were built using stronger standards did much better than older structures. As the recovery effort unfolds, entire communities should be rebuilt with an aim to prevent damage from higher seas and more destructive storms, he said.

“The key here is building back better and stronger to withstand the next storm,” Biden said. “We can’t build back to what it was before. You got to build back better because we know more is coming.”

His comments come as climate scientists are warning that human-caused global warming is making such disasters worse. Researchers have found that warmer sea surface temperatures can supercharge hurricanes, that increased moisture in the atmosphere will dump more rainfall and that drier conditions will fuel bigger wildfires.

Hundreds of Americans have died in recent years as a result of such conditions.

Biden has overseen far-reaching efforts to reduce greenhouse gas emissions by expanding clean energy and increasing the use of electric vehicles.

But few leaders in Washington have adequately prepared for the real costs of climate change by supporting climate adaptation, said Rep. Sean Casten (D-Ill.) in an interview. He noted that the Inflation Reduction Act was the biggest climate package to ever pass through Congress, and yet its investments of $369 billion is only 40 percent of what’s necessary to mitigate greenhouse gas emissions.

That means each year, adaptation gets harder and more expensive, he said.

“Forget about whether the Democrats or the Republicans or the Whigs or the Tories are doing enough about adaptation,” Casten said. “The scope of the problem is growing exponentially every year and any solution designed for last year by definition is inadequate.”

In Ponce, Puerto Rico, on Monday, Biden spoke about the need to remake the territory’s power grid.

“We know that the climate crisis and more extreme weather are going to continue to hit this island and hit the United States overall,” Biden said. “And as we rebuild, we have to ensure that we build it to last. We’re particularly focused on the power grid.”

Biden said Puerto Rico will have more microgrids in the future, allowing for more decentralized power sources that will help keep the lights after future storms. The Department of Energy will form the Puerto Rican Grid Recovery Modernization Team to ramp up the island’s reliance on clean energy and power sources that are not so reliant on transmission lines, which are frequently knocked out by storms.

In Florida, Biden met with a bitter political rival, Republican Gov. Ron DeSantis. The two potential 2024 presidential candidates put their differences aside to talk about rebuilding the state. Biden praised DeSantis for recognizing the threat posed by a warming world, even though DeSantis avoids talking about climate change.

“The biggest thing the governor has done and so many others have done, they’ve recognized this thing called global warming,” Biden said.

Republican lawmakers in Washington oppose policies that aim to cut fossil fuels, but some have expressed an openness to funding climate adaptation. No major bill on the issue has been introduced.