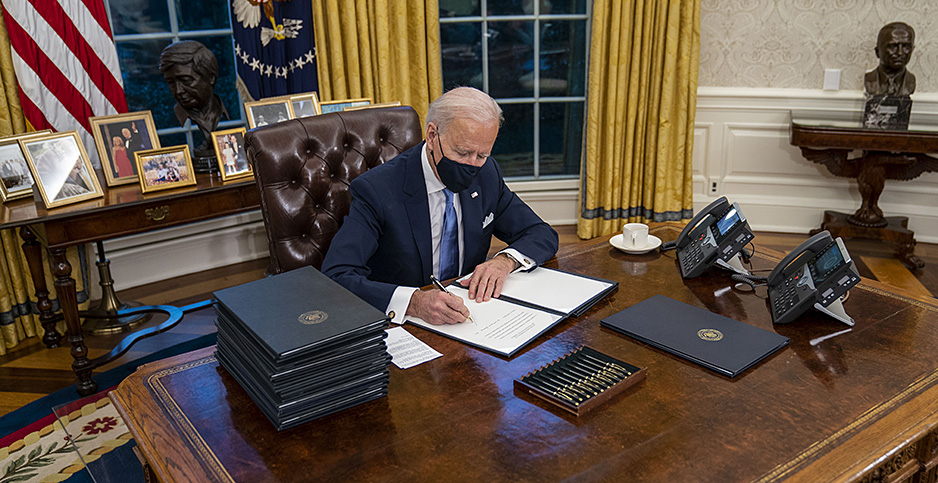 President Biden last night signaled he would take a bold approach to federal regulations — giving some hope to the progressive wing of his party.

He signed a memo called "Modernizing Regulatory Review," which states that regulations are critical to fighting tangible problems.

While Biden is keeping in place the basic structure of regulatory review — including cost-benefit analyses loathed by progressives — he summoned the Office of Management and Budget to create procedures to ensure "regulatory initiatives appropriately benefit and do not inappropriately burden disadvantaged, vulnerable, or marginalized communities."

In the Trump era, progressives condemned the administration’s analysis for emphasizing the costs to industry while ignoring the full range of benefits to communities.

Biden also called for the Office of Information and Regulatory Affairs — which has long been known as a black box — to be more open and transparent.

And he called for the office to "play a more proactive role in partnering with agencies to explore, promote, and undertake regulatory initiatives that are likely to yield significant benefits."

Many academic experts found the memo encouraging. Conservative think tank scholars, however, said the new direction would amount to "gutting the restraint of the past four years altogether."

"I think this Day 1 action signals Biden’s commitment to really revisiting regulatory reform," which never really happened in the Obama years, said Jennifer Nou, a law professor at the University of Chicago.

"It is going to follow the structure that has been in place for a while, but I do feel like there is more energy and appetite to revisit things like distributional weights, equity and disclosure."

The fact Biden made this regulatory action on day one is significant, she said. President Obama’s regulatory memo did not come until Jan. 30.

Wayne Crews, an analyst at the conservative Competitive Enterprise Institute, complained the new process would in effect do away with cost-benefit analyses "by elevating unquantifiable, rolling-goalpost aims of progressivism as benefits and deny costs of regulation altogether."

"There is no mention of costs and burdens of regulation; rather, administrative state intervention is implicitly wholly good or neutral — even without Congress calling the shots," he wrote in an email this morning.

Progressives remain cautiously optimistic. James Goodwin, an analyst at the Center for Progressive Reform, thought the memo "suggests that they are considering a completely new direction."

Goodwin and other progressives were disappointed with the Obama OIRA, particularly when it was led by Harvard University professor Cass Sunstein. Whoever is chosen to lead OIRA this time around will have a huge impact on how the changes are carried out, he added.

Biden hasn’t announced his pick yet, but Jim Tozzi, a veteran White House regulatory staffer, said that’s not because they forgot about it. "It’s not that they are not working on it," he said. "It’s being discussed."

He also axed Trump orders that aimed to weaken regulatory enforcement of environmental crimes. And he cut one calling for the dismantling of federal advisory committees.