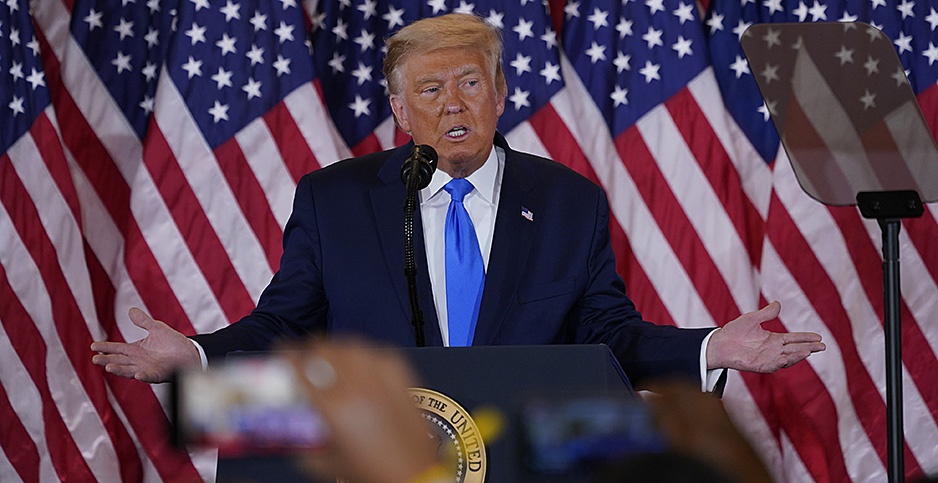 Democrats dreamed that the 2020 election would deliver them a broad mandate to kick-start decarbonization across every sector of the economy.

They woke up this morning with smaller hopes.

Though control of the Senate and White House still were unknown as of 5 a.m., it was clear by then that a Democratic landslide forecast in polling averages hadn’t materialized.

No matter the final result, the horizons of possibility appear to have narrowed.

Barring a late sweep in key races, Democrats likely will struggle to advance transformative energy policy through Congress, while President Trump’s brand of fossil fuel politics remains intact — and could remain in power too.

That’s a long-term political problem for the climate movement. And in the short term, the fragile truce between progressives and moderate Democrats will come under tremendous pressure as both sides seek to explain the electoral shortfall and position themselves for the new balance of power.

Democratic presidential nominee Joe Biden made his "Build Back Better" clean energy and infrastructure plan a main part of his campaign, and polls showed voters strongly preferred his climate plan to Trump’s fossil fuel advocacy. Although other issues scored higher, surveys indicated Democrats’ biggest edge over Republicans was the environment.

If those polls were correct, then climate change wasn’t influential enough to mobilize or flip enough voters to reshape the electorate.

Instead, Republicans posted some of their biggest gains in climate change hot spots.

In Miami, where sea-level rise floods some neighborhoods on sunny days, Trump was on track to dramatically increase his margins while voters ousted two Democratic House members. And that was after the billionaire climate activist Michael Bloomberg dropped $100 million into the state.

Republicans were also on track to gain ground in Iowa. Trump, who has claimed wind turbines cause cancer, comfortably won the second-biggest wind energy state. And along the Mississippi — which spent nearly 100 days last year above flood stage — Iowa Democrats were at risk of losing two House seats.

In Charleston, S.C., where tidal flooding is projected to strike up to 180 times a year by the 2040s, voters unseated Rep. Joe Cunningham (D) in favor of Nancy Mace (R), who says climate science isn’t settled.

Republicans won those climate-vulnerable areas as the Trump administration formally withdraws today from the Paris climate agreement. While the move was long expected, it signals that the United States has now formally abandoned the world’s efforts against climate change.

Climate scientists have warned that avoiding the worst effects of climate change will require cutting emissions in half by 2030.

A Trump victory would cement the status quo. But without the Senate, a Biden victory might not signal earthshaking changes either. The most ambitious portions of Biden’s climate plans will require legislative action, like decarbonizing the electricity sector by 2035.

Senate Democrats added to their ranks Mark Kelly of Arizona, who counted significant support from environmentalists, as well as John Hickenlooper of Colorado, who has alienated climate hawks by enthusiastically supporting the oil and gas industry.

But Republicans senators held on in Montana and Iowa, leaving Democrats a shrinking window to take the upper chamber. And in the House, Republicans defied expectations by gaining seats.

Democratic strategists who once planned for intraparty policy fights over fracking bans and renewable investments instead face the prospect of more roadblocks from Senate Majority Leader Mitch McConnell (R-Ky.).

Dems ask: Why so close?

Without a Democratic Senate, a Biden administration would have to get much more aggressive on clean car standards and other areas where he has maximum regulatory leverage, said Jamal Raad, campaign director for Evergreen Action.

Trump is on track to lose the popular vote again, but the close race in the Electoral College denied Democrats the opportunity to claim that Trump’s brand of politics had been rejected.

On the contrary, Trump claimed victory even as millions of votes remained uncounted. The president proclaimed from the White House that vote counting should immediately stop. Twitter and Facebook flagged his social media posts for disinformation, restricting their reach.

"This is a major fraud on our nation," Trump said, adding, "so we’ll be going to the U.S. Supreme Court. We want all voting to stop."

In the final days of the campaign, Trump relied on that disinformation strategy to differentiate his climate and energy policy from Biden’s. For weeks, Trump claimed that Biden would ban hydraulic fracturing even as the former vice president said he would not.

Trump also used the campaign’s final days to blast voters with disinformation that resembled his long-standing attacks on climate scientists. He criticized Biden for "listening to the scientists," and he claimed doctors were inflating COVID-19 cases to make money.

That messaging carried Trump to decisive wins in the battleground states of Ohio, Florida and Texas.

Saikat Chakrabarti, who was chief of staff to Rep. Alexandria Ocasio-Cortez when the New York Democrat introduced the Green New Deal resolution, said the results should be a wake-up call.

"Whatever the outcome, Democrats need to think long and hard about how it’s so close despite there being overwhelming support for single payer healthcare, mass investment in a clean energy economy, a path to citizenship for undocumented immigrants and other core issues," he tweeted.

Still, exit polls compiled by The New York Times showed Biden had won some key climate constituencies. He won 68% of voters who said climate change was a serious problem, while Trump won 29% of those voters.

Biden also won 58% of labor union members, a constituency he courted by shaping his $2 trillion climate plan around union jobs, and by inviting labor leaders into key campaign roles.

The former vice president also won 62% of voters aged 18 to 29, who show higher levels of concern about global warming across party lines.

But it’s not clear whether young voters expanded their share of the national electorate. Turnout was up, but young people constituted only 17% of voters, according to preliminary exit polls, compared with 19% in the last presidential race.

There are signals that climate change may have had at least a minor role in at least one region where Democrats made gains.

Biden won Arizona after running up his margins in Maricopa County. Maricopa was the largest county won by Trump in 2016, but Biden’s victory was powered by suburban voters there as well as the county’s growing share of Latino voters.

The region, which includes Phoenix and its suburbs, already is seeing significant climate impacts, largely in the form of extreme heat waves and a record number of days in recent years that have topped 110 degrees Fahrenheit.