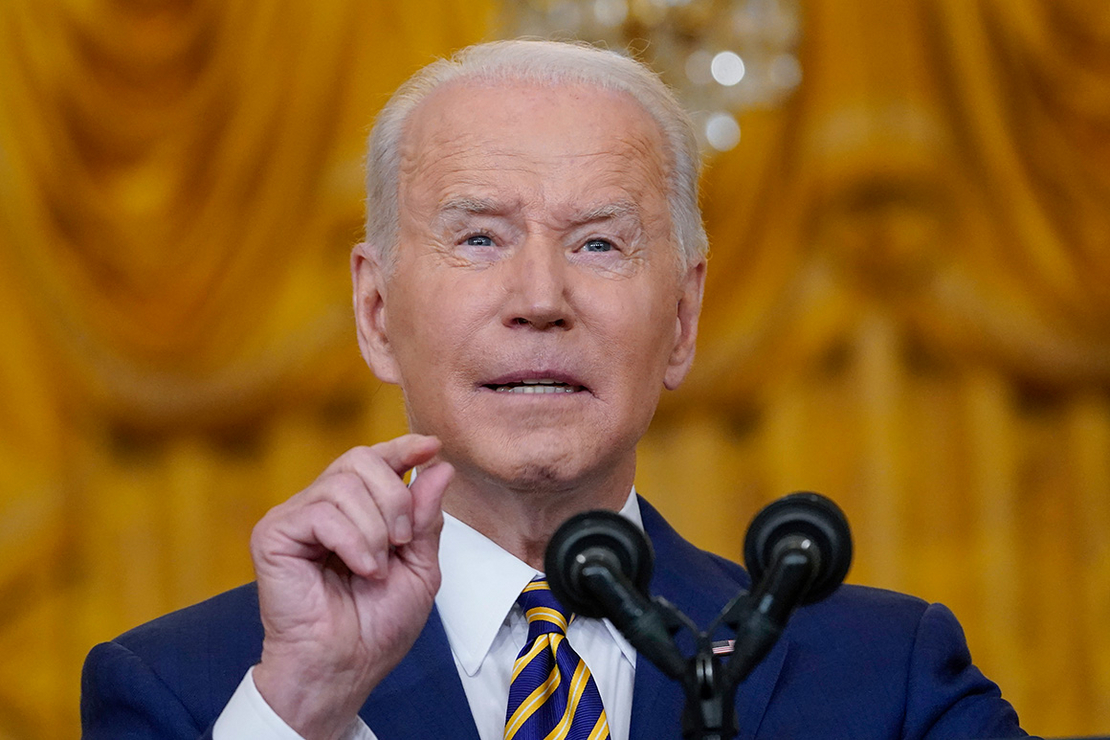 President Biden speaking during a news conference in the East Room of the White House yesterday. AP Photo/Susan Walsh

President Biden said yesterday that he’s willing to split up his "Build Back Better" bill to give the stalled measure a chance of passage. And he signaled there was strong support on Capitol Hill for its climate-related provisions.

“We’re going to have to probably break it up,” Biden said during a White House press conference. “I’ve been talking to my colleagues on the Hill; it’s clear that we would be able to get support for the 500-plus billion dollars for energy and the environment.”

Biden’s comments came during a rare two-hour press conference. It was the first time the president has said publicly that he’s open to the idea of taking a piecemeal approach to passing "Build Back Better," which contains a wide range of his domestic priorities.

Biden’s press conference came as his approval ratings hover in the low 40s. He was defensive to questions about his response to the Covid-19 pandemic, Russia’s possible invasion of Ukraine and his belief there was a bipartisan path to working with Republicans.

Biden bluntly acknowledged that he had misread Republican opposition to his agenda and said it was worse than what former President Obama faced.

“I did not anticipate that there’d be such a stalwart effort to make sure that the most important thing was that President Biden didn’t get anything done,” he said, adding, “Think about this: What are Republicans for? What are they for? Name me one thing they’re for.”

Biden’s climate ambitions have collided with the political realities of Washington politics during his first year in office. Many of his plans to address climate change were inserted into the "Build Back Better" measure, which has been stuck for months in legislative limbo.

That’s in spite of a small shift among congressional Republicans as it relates to climate. While a growing number of Republicans no longer deny the basic science of global warming, GOP lawmakers have done little if anything to help advance Biden’s climate plans. Meanwhile, Democratic infighting has hindered Biden’s campaign pledge to pass the most aggressive plan in U.S. history to cut greenhouse gas emissions.

The $1.8 trillion "Build Back Better" agenda passed the House almost two months ago, but it stalled in the Senate amid objections from Sen. Joe Manchin (D-W.Va.) about some provisions, including a child care tax credit.

Manchin also weakened the strongest climate pieces of the bill — including a groundbreaking plan to entice utilities to build out clean energy.

Recently, however, Manchin said his biggest concerns about the bill were the child tax credits, and he said he was open to passing climate policies as a stand-alone bill. The current proposal contains about $555 billion for energy policy, including a major investment in clean energy tax credits that could transform the industry.

Some House Democrats have called for breaking out pieces of "Build Back Better" as a way to notch some legislative victories before the November midterm elections. Republicans are widely expected to take back the House and possibly the Senate, which means that a number of lawmakers feel they are racing against the clock to pass something.

Still, in the Senate, some lawmakers are determined to pass a more comprehensive plan that widens the social safety net and increases educational opportunities. Sen. Tina Smith (D-Minn.), one of the Senate’s climate hawks, recently told E&E News she does not want to separate climate policy from the larger bill.

Even as Biden spoke, a Senate shift appeared to take place.

Before the president had finished, Sen. Jon Tester (D-Mont.), a key moderate vote, told reporters at the Capitol that he was ready to move on climate policy.

Manchin, however, told reporters on the Hill shortly after Biden spoke that the White House had not yet approached him about breaking out pieces of the "Build Back Better" agenda.

“Not yet, no one has come to me on that,” Manchin said.