Biden talked with 14 leaders. He raised climate with 12 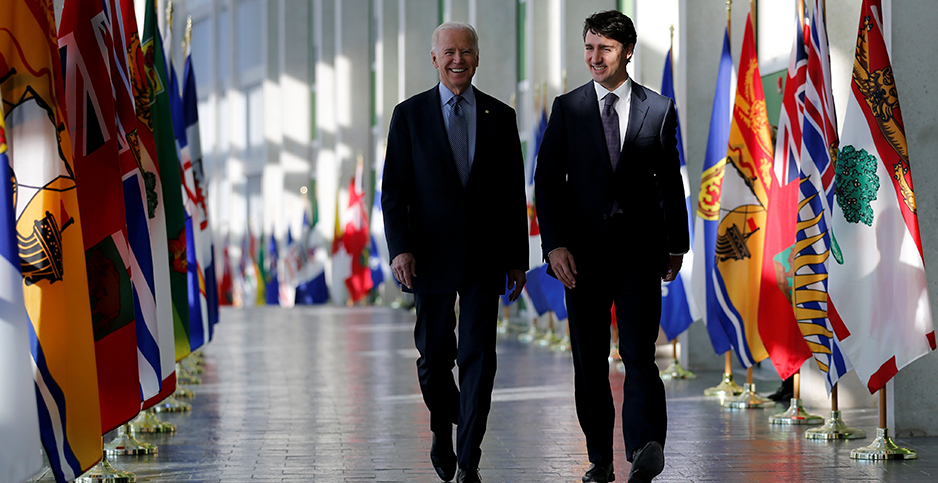 President-elect Joe Biden has been raising the issue of climate change with world leaders ahead of his inauguration. He's pictured with Canada's Prime Minister Justin Trudeau in 2016. Chris Wattie/REUTERS/Newscom

It sounds like the setup to a joke: What do the pope, the taoiseach and Justin Trudeau all have in common?

The leaders of the Vatican, Ireland and Canada each talked to President-elect Joe Biden about climate change in their first phone call. So did the British, Australian and Indian prime ministers. The presidents of France, Chile, South Africa and South Korea did, too.

Biden has discussed climate change in 12 of his first 14 calls with world leaders, according to readouts from his transition team. That’s an unprecedented diplomatic focus from a new U.S. president, and it could signal that Biden plans to make climate a signature component of his foreign policy.

The phone calls are more than a gesture, experts said. The U.S. has a credibility problem on climate that will be difficult for Biden to repair.

With his calls, Biden could be signaling that those constraints won’t dissuade him from pursuing climate action, said Barry Rabe, a University of Michigan professor of environmental policy.

"There are lots of things for a president to talk to a world leader about in that initial call. And I think what is said could be indicative of what’s on the top of a president’s list," he said.

"The very fact that he would raise [climate] in call after call — rather than cherry-picking one or two — is really suggesting that this is going to be a significant priority," Rabe said.

Biden has vowed that one of his first acts as president will be returning the U.S. to the Paris climate agreement, which President Trump quit. He has also vowed to pressure other countries to pledge more ambitious goals.

In a February primary debate, Biden said: "On day one when I’m elected president, I’m going to invite all the members of the Paris accord to Washington, D.C. They make up 85% of the problem. They know me, I’m used to dealing with them on international relations. I will get them to up the ante in a big way."

Biden will get that chance at the next round of international climate talks. The 2021 Conference of the Parties to the U.N. Framework Convention on Climate Change will be the first time countries update their emissions goals from their initial 2015 pledge.

Biden could use that same opportunity to demonstrate U.S. commitment by setting aggressive goals. But he will have to balance that imperative against what he can actually expect to accomplish, said Henrik Selin, a Boston University professor of international relations (Climatewire, Nov. 5).

"We’re basically asking President-elect Biden to do something that no other president has ever done in the history of the United States, and that is working successfully with Congress to pass climate change legislation that matters," he said.

Biden’s calls also matter for climate policy outside the Paris Agreement. For instance, the U.S. coordinated methane regulations with Canada and Mexico under the Obama administration.

Biden could restart that cooperation without Congress, Rabe said, which makes the president-elect’s call with Trudeau especially significant.

The two calls in which Biden didn’t discuss climate with world leaders were with Israeli Prime Benjamin Netanyahu and Israeli President Reuven Rivlin.