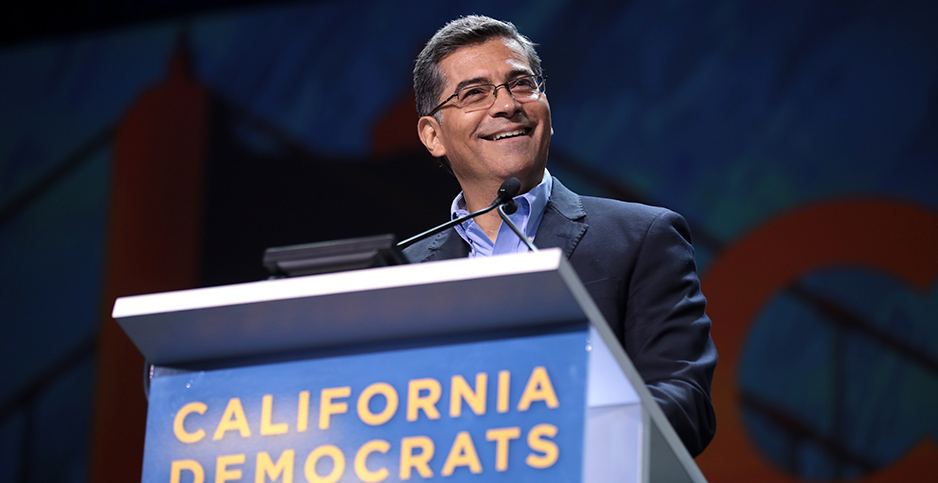 California Attorney General Xavier Becerra (D) is headed for a new role in the Biden administration. Becerra has been a lead challenger of President Trump's environmental policies. Gage Skidmore/Flickr

President-elect Joe Biden has chosen the leading challenger of the Trump administration’s environmental policies to serve as the next secretary of Health and Human Services.

California Attorney General Xavier Becerra’s (D) departure from his post would leave a key vacancy in an office known for its leadership on environmental issues. Becerra sued the Trump administration more than 100 times to protect Obama-era policies like the Affordable Care Act and the Clean Water Rule, and lawsuits led by Becerra and other Democratic attorneys general have enjoyed a high rate of success in court (Greenwire, May 26).

If he is confirmed to lead the Department of Health and Human Services, Becerra would play a key role in leading the federal government’s response to the coronavirus pandemic.

"This trusted and accomplished team of leaders will bring the highest level of integrity, scientific rigor, and crisis-management experience to one of the toughest challenges America has ever faced — getting the pandemic under control so that the American people can get back to work, back to their lives, and back to their loved ones," Biden said in a statement today announcing his picks to serve on his health team.

Biden’s selections also include Vivek Murthy to serve again as surgeon general and Anthony Fauci to be chief medical adviser on COVID-19 and to continue his role as director of the National Institute of Allergy and Infectious Diseases.

As California’s top attorney, Becerra challenged the Trump administration’s rules for implementing the National Environmental Policy Act, plans to build a border wall between the United States and Mexico and failure to update energy efficiency standards for home and commercial appliances.

One of Becerra’s most notable environmental victories occurred when a federal district court in California this year agreed to halt the Trump administration’s repeal of a Bureau of Land Management rule that placed restrictions on methane emissions from oil and gas operations on federal and tribal lands.

Becerra has been attorney general of California since 2017, when he was elected to replace Vice President-elect Kamala Harris after she became a senator.

He previously served 12 terms in Congress, where he championed the Affordable Care Act, a law he helped defend in the Supreme Court last month.

"This nomination is recognition of the decades of hard work, dedication, and leadership by Xavier Becerra and his most recent work alongside the Democratic Attorneys General under the Trump Administration," Massachusetts Attorney General Maura Healey (D) said in a statement today.

Before holding federal office, Becerra was a representative in the California Legislature and a deputy attorney general in the California Department of Justice. He previously worked in a legal services office where he represented mentally ill clients.

A Stanford University and Stanford Law School graduate, Becerra was the first member of his family to receive a four-year degree.

If he is confirmed as HHS secretary, Becerra would be the first Latino to serve in the role.