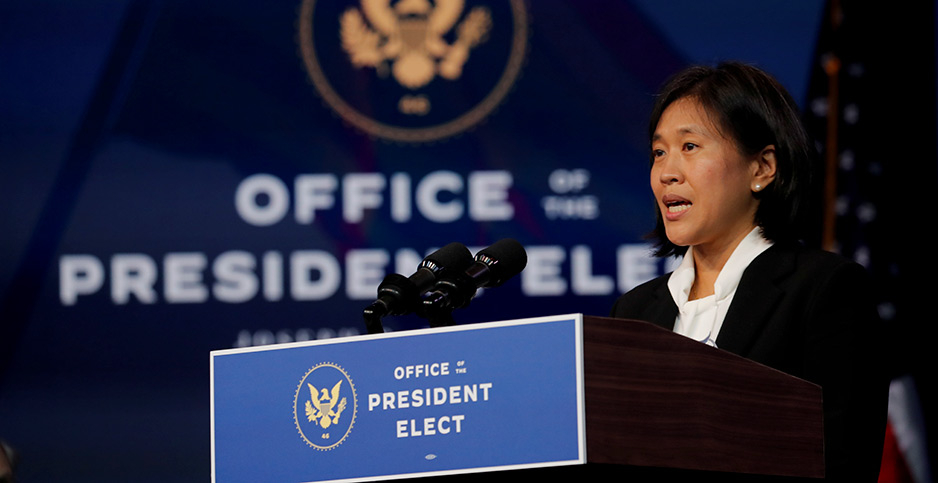 U.S. Trade Representative-designate Katherine Tai said the USMCA was a "significant accomplishment" because of its "groundbreaking" environmental protections. She also promised that climate issues would guide the Biden administration’s trade policy.

"As a replacement for a 25-year-old trade agreement that started the erosion of U.S. political support for trade, the USMCA is notable for incorporating groundbreaking labor and environmental provisions, including enforcement mechanisms that address longstanding wounds and grievances suffered by regular working people," Tai said during the National Foreign Trade Council Foundation Virtual Conference and Awards Ceremony, according to her prepared remarks.

That marks a significant break by the incoming administration with parts of the environmental movement, which largely opposed the deal after criticizing its treatment of climate change. Senate Minority Leader Chuck Schumer of New York and other Democrats cited the USMCA’s silence on carbon emissions as a reason to oppose it.

"By not addressing climate change, the USMCA fails to meet the crises of this moment," Sen. Kamala Harris (D-Calif.), now the vice president-elect, said before voting against the deal early last year.

The Trump administration negotiated the USMCA as part of its campaign to get more in return from U.S. trading partners. House Democrats initially balked at the deal and dispatched their own negotiators to secure stronger terms — including Tai, the House Ways and Means Committee’s chief trade counsel (Greenwire, Dec. 10, 2019).

The final deal won broad bipartisan support, clearing the House by a 385-41 vote and the Senate by 89-10. Citing the AFL-CIO’s blessing, Biden signaled his support for the deal during the Democratic primaries.

By making it easier and cheaper for companies to move goods between countries, critics say the trade agreement encourages manufacturers to outsource wherever they can find the cheapest labor and dirtiest environmental rules — or else risk a competitor undercutting their prices by doing the same.

"Today’s vote moves us one step closer to locking in Trump’s polluting legacy for decades to come," Sierra Club Executive Director Michael Brune said in a statement when Congress approved the deal in January 2020.

"We need trade agreements that work in lock step with the goals of the Paris Agreement, not backdoor deals that help corporations export pollution and jobs, weaken climate protections, and extract more fossil fuels."

Other climate advocates were more ambivalent, saying the deal’s shortfalls shouldn’t distract from the deeper problems of its predecessor, the North American Free Trade Agreement.

The deal does include new protections for conservation issues and plastic pollution, said Amanda Maxwell of the Natural Resources Defense Council.

But on climate, she said, the USMCA "really didn’t get anything done. Climate change isn’t even mentioned in the document at all."

On a scale from 1 to 10, she said, "NAFTA was like a negative 3 for the environment, and USMCA probably got us to a positive 3."

Maxwell said Democrats could only get so much climate policy in a trade deal led by Trump. Even the USMCA’s treatment of the Montreal Protocol — the GOP-supported international agreement to phase out pollutants that destroy Earth’s atmospheric ozone layer — minimizes references to climate, she said.

Tai would be a big improvement, Maxwell said, because she’s already wading into the underappreciated nexus between climate and trade. She added that NRDC wants to work with her to ensure that future trade deals don’t use USMCA as a template.