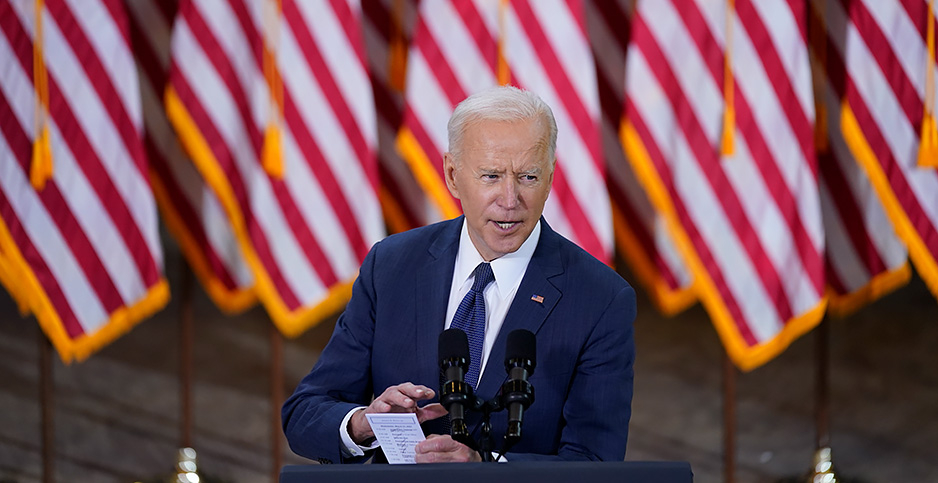 President Joe Biden delivers a speech on infrastructure spending at the Carpenters Pittsburgh Training Center. The Biden administration is trying to tamp down criticism from the left about the climate ambitions of his infrastructure package. Evan Vucci/Associated Press

Batting back criticism from all sides, the White House yesterday defended President Biden’s climate and infrastructure plan as just as bold — if not bolder — than what he campaigned on, despite proposing to spend less money less quickly.

Biden’s top climate officials pointed to new ideas that weren’t included in Biden’s previous plans, such as an environmental justice fund. They said his funding target would put the United States on track for deep decarbonization. And they said more money might be coming — or maybe less.

Climate mitigation constitutes less than half of Biden’s $2 trillion proposal — though the administration’s breakdown is vague — and it’s spread over eight years.

Progressives have complained that Biden backed down from his campaign pledge of $2 trillion mainly directed at halting climate change, spread over four years.

Their latest frustration follows the administration declaring a temporary pause to new oil and gas leases on public lands, after Biden campaigned on a permanent ban.

White House climate czar Gina McCarthy yesterday rejected the notion that Biden has backtracked, saying the White House is also preparing budgets and procurement decisions that would complement Biden’s climate proposal, along with a second infrastructure package that’s still taking shape but is expected to address the social safety net.

"The challenge right now is, if folks have ideas for additional resources, they need or should be brought to the table; I’m sure the president will be open to having those discussions moving forward," McCarthy said on a call with reporters, mentioning the president’s goal of bipartisanship.

"But if folks think that less money should be expended, which I’m hearing as well — we’re always either doing too little or too much — then we’ll have those conversations," she added. "But rest assured that the president put a number out here that he felt was not just defensible but required to meet this moment in time."

Republicans already have all but declared bipartisanship dead, with Senate Minority Leader Mitch McConnell (R-Ky.) saying yesterday that none of his members would support either raising corporate taxes or adding trillions more to the national debt.

That means Democrats can afford to lose only three House members and zero senators for Biden’s plan to pass Congress on a party-line vote. Moderates have been the key votes for Biden’s Cabinet appointees and his pandemic bill, bargaining concessions over personnel and stimulus policy. But now progressives are the ones starting to grumble.

Rep. Alexandria Ocasio-Cortez (D-N.Y.), who helped craft Biden’s climate plan after he won the Democratic nomination, said the president’s plan deserves "a lot of credit" for its vision and scope but that much more money is needed to accomplish what he says he wants.

"So, for example, let’s take public housing. This plan, this Build Back Better plan, it advocates for a total national investment of $40 billion in public housing nationwide. Sounds great, right?" Ocasio-Cortez said Wednesday on "The Rachel Maddow Show."

"Except when you consider the fact that the New York City public housing system needs $40 billion alone just to get up to code. During the wintertime, people run out of heat. They don’t have hot water. They don’t have electricity sometimes. There are holes in people’s walls."

Spending $1 trillion annually is what it would take to meet the climate deadlines set by scientists at the Intergovernmental Panel on Climate Change, she said.

Even some moderates have called for more spending. Sen. Joe Manchin (D-W.Va.), the chair of the Senate Energy and Natural Resources Committee and the upper chamber’s swing vote, has called for spending closer to $4 trillion.

Some defenders of Biden’s approach have said the top-line spending number shouldn’t overshadow other critical components of the proposal, such as a clean electricity standard. That standard could propel electricity to net-zero emissions, a critical step to decarbonizing other sectors like transportation (Climatewire, April 1).

And critical constituencies, such as unions, have lauded Biden’s proposal, which includes labor protections and training. Terry O’Sullivan, president of the Laborers’ International Union of North America, hailed the proposal as "historic."

"I remember, brick by brick, every piece of the plan that was laid out in the summer of 2020," he said, pointing to clean tech training programs proposed by the International Brotherhood of Electrical Workers and water programs for front-line communities proposed by environmental justice advocates.

"So we went back and looked at every single line we had written together over the course of the campaign," Zaidi said. "That’s what we’re carrying forward. Those values that the president ran on is what we are carrying forward. The folks that we stood with, who helped to bring us this far, they’re the ones we’re walking forward with today."

He added that the Biden team’s outreach continued after the election, culminating in new commitments, such as replacing 100% of lead service lines for water.

"If anything, we have set our sights bolder and broader in terms of the transformation that we seek," he said.