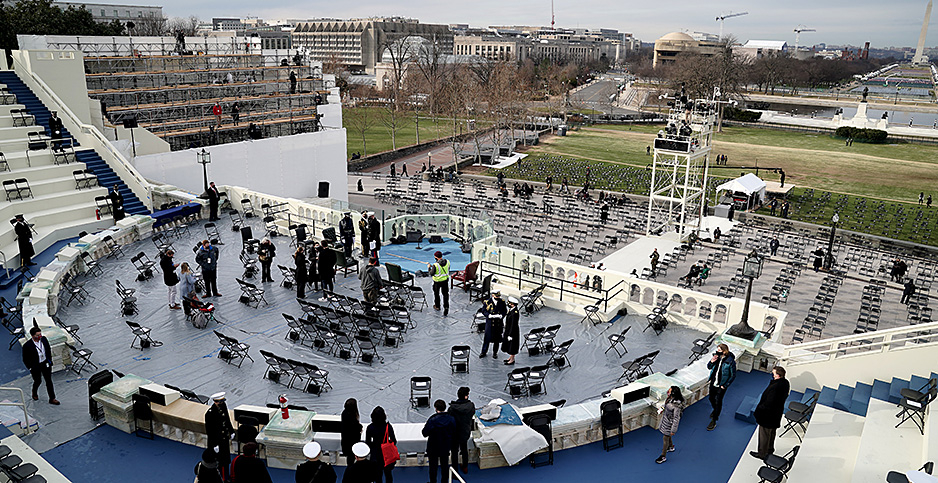 Preparations are made at the Capitol yesterday for President-elect Joe Biden's inauguration tomorrow. Biden has said he will immediately resume U.S. participation in the Paris Agreement. Greg Nash - Pool/CNP/Polaris/Newscom

President-elect Joe Biden will begin the process of returning the United States to the Paris climate accord on the same day he takes office, his transition team confirmed over the weekend.

The move is one of roughly a dozen executive actions planned for tomorrow, when Biden replaces President Trump as commander in chief. On the campaign trail, Biden repeatedly pledged to reverse Trump’s decision to leave the agreement.

To return the U.S. to the Paris deal, the Biden administration must submit instruments of accession to the U.N. Framework Convention on Climate Change. If that happens tomorrow, the U.S. will formally reenter the 2015 agreement a month later, on Feb. 19.

Biden has long promised to reverse Trump’s withdrawal from Paris on his first day as president.

But membership in Paris requires a country to maintain a working nationally determined contribution, or NDC, detailing how it plans to adapt to climate change and reduce emissions. The complexity of constructing a credible NDC compelled some experts to speculate that Biden might wait to formally return the U.S. to Paris later in the spring, when that process had concluded.

The Obama administration’s 2015 pledge for 2025 is now out of date, and the U.S. must quickly formulate a new 2030 commitment. That could take months and involve consultations across the federal government and with states, cities and other players.

Biden’s rush to reenter the agreement could mean the U.S. would be out of compliance with Paris for a short while after it rejoins.

But Sue Biniaz, a veteran State Department attorney who helped negotiate Paris, wrote in a blog post for Columbia Law School that one option would be for the U.S. to resubmit the 2025 NDC — which calls for an emissions reduction of 26% to 28% below 2005 levels by that year — with the stated intention of updating it as soon as possible.

"This would satisfy the requirement of having an NDC in place, while the Administration worked to develop its subsequent NDC," she wrote.

A downside, she added, would be that the Obama-era pledge would seem less plausible because of the anti-climate actions of the Trump administration.

Politico first reported that Biniaz, who is a member of Biden’s State Department transition team, would return to the agency to work on climate with Jonathan Pershing, the final special envoy for climate change under President Obama.

Pershing’s return to government is expected to be a limited leave of absence from his current position as program director of environment at the William and Flora Hewlett Foundation.

Elan Strait also is expected to take a climate role in the Biden administration. Strait worked on climate and clean energy at the White House National Security Council under Obama and since has managed the We Are Still In initiative of states and cities that support the Paris Agreement.

Apart from rejoining Paris, the Biden transition team in a Saturday memo promised that between Jan. 25 and Feb. 1 the president-elect would "sign additional executive actions to address the climate crisis with the urgency the science demands."

Numerous news outlets reported over the weekend that the Biden administration would cancel permitting for the controversial Keystone XL oil pipeline soon after his inauguration.

The former vice president also said during last year’s campaign that he would hold a high-level summit in his first 100 days to encourage greater global ambition on climate change.

Biden could announce plans for that summit, or for how he intends to deliver $2 billion in Green Climate Fund contributions promised by Obama and withheld by Trump.