Biden to deliver Hill speech as infrastructure talks pick up 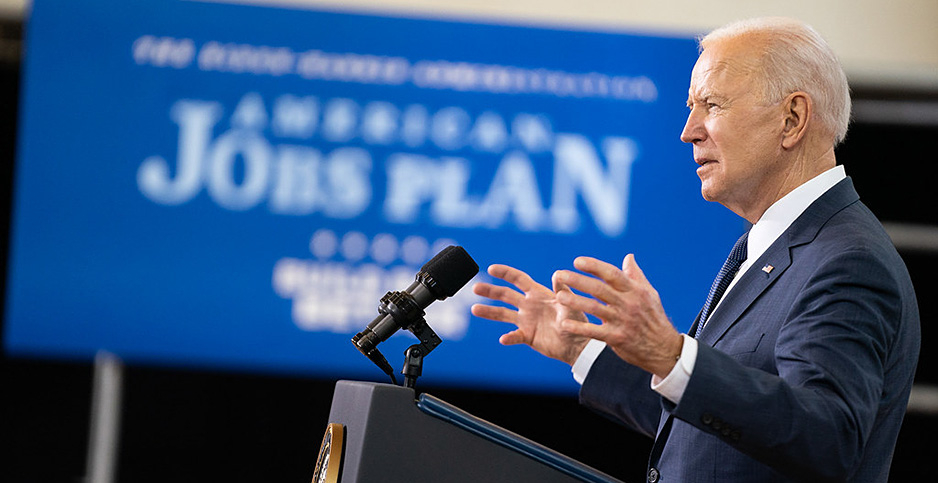 President Biden delivering remarks in March on his infrastructure package. He will appear before a joint session of Congress this week. Adam Schultz/White House/Flickr

Bipartisan infrastructure negotiations will pick up this week, with President Biden preparing to rally for his proposal during a joint session of Congress on Wednesday.

Biden’s speech comes on the eve of his first 100 days in office, and he is expected to tout the pace of COVID-19 vaccinations as well as the $1.9 trillion pandemic relief bill he signed into law last month.

The president is also likely to use the national stage to press lawmakers to work on his $2.2 trillion infrastructure push, known as the American Jobs Plan.

His proposal goes well beyond building roads, bridges and highways and would accelerate the greening of the economy and help fight climate change.

Leading Senate centrists said yesterday that they want to work with Biden, though they signaled they favor a smaller package focused on traditional infrastructure projects.

"We know that it has bipartisan support, we’ve just got to look to see if we’ve got everything in there we need," said Manchin, who suggested Congress first pass a bill focused on traditional infrastructure and then later consider a "human infrastructure" bill focused on various social safety net programs and other domestic initiatives.

Manchin, a moderate being courted by both parties on infrastructure, did not rule out a tax increase on the wealthy to pay for Biden’s agenda, an idea that the president is expected to push for Wednesday night.

Manchin did, however, say his first priority would be cracking down on unpaid taxes and closing tax loopholes for the wealthiest Americans.

He reiterated his desire to pass any package through regular order in the Senate, which would require 60 votes, rather than moving a partisan bill through budget reconciliation with 51 votes.

Sen. Shelley Moore Capito (R-W.Va.), the ranking member of the Environment and Public Works Committee and author of the GOP plan, appeared on CNN as well yesterday and said she had gotten "very encouraging" signs from the White House on infrastructure and expects more talks this week (E&E Daily, April 23).

"We’re open to looking at all of these different areas, as long as it’s paid for. We have always done this bipartisan, this physical infrastructure piece, and there’s no reason we shouldn’t be able to get to an agreed amount at this point. I don’t know where that is right now, but at least we’re talking and we’re starting to talk," she said.

Capito also said she opposes raising income taxes and offered several ways to pay for the plan, including increasing the gas tax, creating a mileage tax for electric vehicles and hybrids, and allowing communities to use pandemic aid for infrastructure projects.

Capitol noted she does not support Biden’s calls for more than $170 billion for electric vehicles, including building a national network of charging stations and offering tax credits.

She said the private sector could build the needed infrastructure for EVs and then would benefit when drivers stop to get their charges.

The 58-member bipartisan Problem Solvers Caucus threw its own policy framework into the legislative mix Friday.

The report outlines a number of bipartisan solutions on infrastructure, including roads, bridges, water projects, ports, energy, aviation and broadband.

On the particularly thorny subject of paying for road and bridge maintenance, the group called for indexing the federal gasoline tax for the first time in decades, while also phasing in a "modernization" of the excise taxes to "fully and sustainably" fill the Highway Trust Fund and end the practice of using general revenue funds for upkeep.

The caucus additionally calls for transitioning to a vehicle-miles-traveled (VMT) system while considering additional user fees, such as a "modest" annual registration fee on electric and hybrid vehicles and user fees based on the value of freight carried by planes and trucks.

Paying for infrastructure has become especially problematic in the 117th Congress, with Biden calling for doing so by hiking corporate tax rates over 15 years. Republicans are dead set against doing so.

The Problem Solvers Caucus, equally divided between members of both parties, has previously provided a complementary role to the "Group of 20" senators, also divided equally between Democrats and Republicans, in COVID-19 relief talks.

The caucus’s principles track thematically with the $568 billion plan laid out by Senate Republicans last week, although that GOP plan stops short of increasing the gas tax and leaves open the question of a VMT.

The Biden administration does not support increasing the gas tax or a VMT, although it has left the door open to negotiations with Congress on putting the Highway Trust Fund on a more stable fiscal path.

Release of the Problem Solvers Caucus document came after members of the group huddled with senators from both parties and Maryland GOP Gov. Larry Hogan in Annapolis on Friday to talk infrastructure.

"We recognize that forging a bipartisan compromise on these issues will not be easy, but we all believe that it can and that it must be done," Hogan, chair of the National Governors Association, said during a Friday press conference.

Caucus Co-chair Rep. Josh Gottheimer (D-N.J.) pledged that the group will "continue working around the clock as we had been to get a bipartisan deal done on this infrastructure package."

"I think the White House is receptive. … They have an appetite to want to do something bipartisan," Manchin said. "This is doable. The other things that are conceptional we can work on, piece by piece, committee by committee."

Leaders of the New Democrat Coalition, a group of more than 100 House lawmakers who favor centrist legislation and ideas, met at the White House last week with chief of staff Ron Klain and other senior aides and offered up some of their own ideas on infrastructure.

"I gave them a list of a number of things that they may not have heard of from other parts of the caucus," said Rep. Scott Peters (D-Calif.), an NDC leader and member of the Energy and Commerce Committee.

Peters said those ideas included a carbon tax to help address climate change as well as investments in carbon capture and storage technologies. He said Klain and others welcomed the input, although they did not specifically endorse the ideas.

Rep. Ann Kuster (D-N.H.), an E&C member and New Democrat leader who attended the meeting, called the sessions "very productive" and that the coalition stressed it has members on all the key infrastructure committees.

"It was an opening of the channels of communication so we can begin working with them behind the scenes on legislation than on messaging to the American people," she added.