Biden to discuss climate ’emergency’ without declaring one 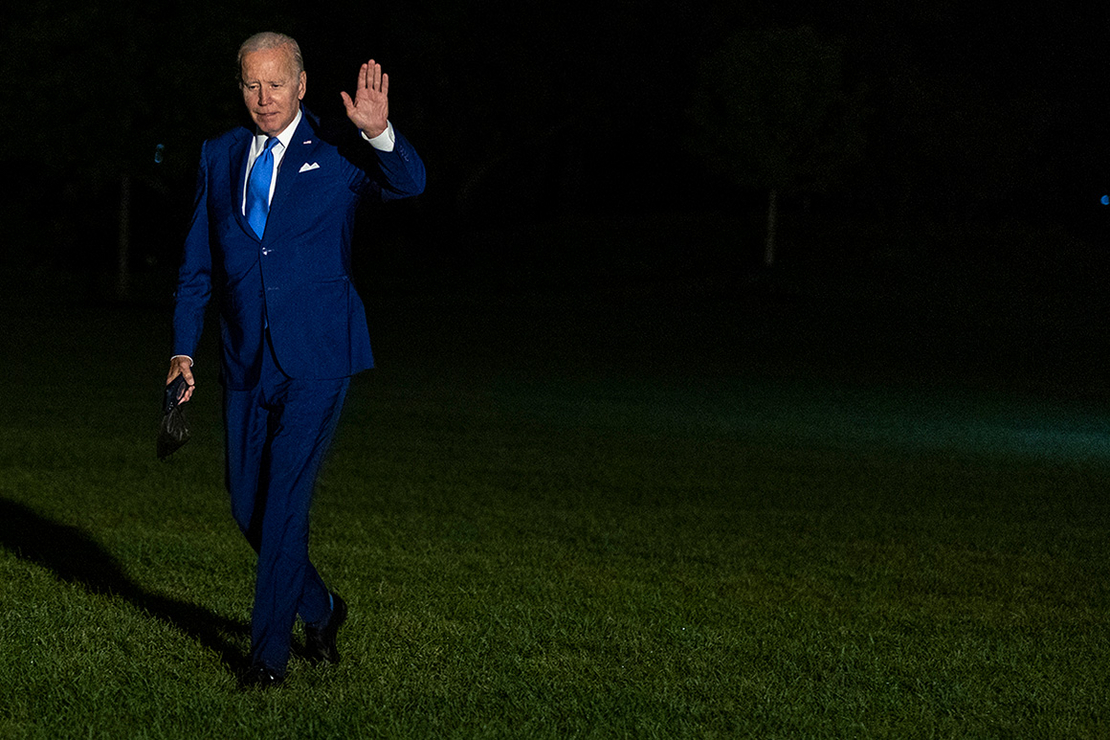 President Joe Biden walking away from Marine One on the South Lawn of the White House on July 16. Tasos Katopodis/Getty Images

President Joe Biden thinks climate change is an emergency, one of his top advisers said today. But he isn’t ready to make it official.

In the wake of the latest collapse of congressional climate negotiations, Biden is traveling to Massachusetts this afternoon to tout his commitment to tackling the issue at the site of a former coal-fired power plant that’s being converted into a facility that makes parts for the offshore wind industry.

“The president is going to make it clear that climate change is an emergency,” White House climate adviser Gina McCarthy told NPR’s “Morning Edition” today as she previewed Biden’s speech. “He’s going to use all the powers available to him. And we’re going to make our climate goals. You know, there is just no choice.”

Biden is expected to lay out new executive actions to bolster the country’s resilience to climate change and expand renewable energy, but he won’t be declaring a climate emergency this week, his spokesperson told reporters yesterday.

Declaring a national climate emergency — a move some climate advocates have been pressing him to make since he took office — would give Biden more leeway to use his executive power to tackle the issue (Greenwire, July 19).

“This climate emergency is not going to happen tomorrow,” White House press secretary Karine Jean-Pierre said yesterday. But “we still have it on the table,” she added.

Frustrated Democrats and environmentalists intend to keep up pressure on the administration to declare a national emergency.

Senators led by Jeff Merkley (D-Ore.) sent a letter to Biden today urging him to “unlock the broad powers” of the National Emergencies Act.

That recommendation doesn’t come lightly, they wrote, adding that they fought former President Donald Trump’s efforts to use his executive power to “build a wasteful and destructive border wall.” A president’s “emergency powers should not be used wantonly,” they wrote. But, they said, “if ever there is an emergency that demands ambitious action, climate chaos is it.”

Asked today whether he was disappointed that Biden isn’t yet declaring a climate emergency, Sanders said, “It is imperative that the administration use every tool that they can to try to save the planet and put the United States in a leadership position working with other countries to cut carbon emissions.”

Sen. Martin Heinrich, a New Mexico Democrat who also signed the letter, said it’s important that the administration ensure that its moves will hold up in court.

“I suspect and I hope that it’s still on the table,” he said of a climate emergency. “I think this is just the beginning of a whole series of executive actions, and my hope is that they’re just being prudent in making sure that they have their ducks in a row.”

There’s no doubt that major executive actions will face challenges, he said, and “you need to be in the strongest legal position.”

Some climate activists, meanwhile, expressed their growing frustration with the Biden administration today as they urged the president to move swiftly to declare a climate emergency.

“As we stare now into the face of an existential midterm election, this declaration will either show young people that Biden gives a damn about our futures, or be a further slap in the face to our generation that is feeling utter despair and frustration of the failure of Democratic leadership,” said Lauren Maunus, advocacy director for the Sunrise Movement.

This administration “isn’t known for its speed,” said Bill Snape, senior counsel for the Center for Biological Diversity. “I actually think it’s a positive sign” that a climate emergency declaration “is finally on the table,” he added.