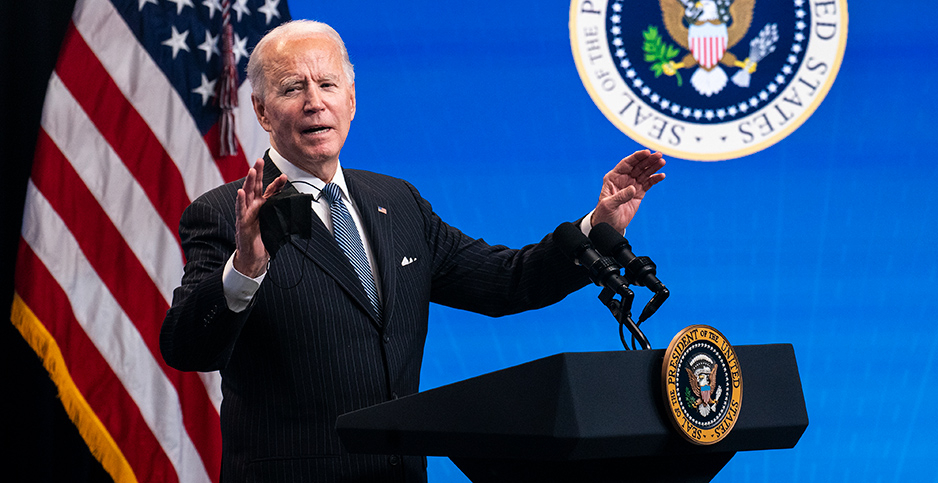 President Biden, seen here speaking at the White House complex yesterday, is planning a week of executive orders, including on the environment and climate change. Kevin Dietsch/CNP/Polaris/Newscom

President Biden is planning to make a major climate push tomorrow, unveiling multiple science- and environment-focused executive orders, including an oil and gas freeze that became a flashpoint in the presidential campaign.

The thrust this week comes as the new president inks dozens of executive orders on the environment, racial equity and the pandemic.

Plans for tomorrow include a moratorium on new federal oil and gas leasing, an order that emphasizes science-based policies, a revamp of the president’s Council of Science Advisors, and a plan to preserve 30% of water and land in the U.S.

The activity has been welcome news for environmentalists and progressives who have extolled Biden’s rigorous timeline for implementing campaign promises.

The League of Conservation Voters launched a $300,000 campaign to promote Biden’s climate agenda. In a digital ad, a voice-over lauds the new administration for "taking bold action on climate, driven by our voices."

"We can invest in 100% clean energy and rebuild a more equitable and just economy for all," the new ad says.

The White House declined to comment on the impending climate actions. Today Biden is set to sign orders focused on racial equity, including language on strengthening engagement with Native American tribes.

According to a White House fact sheet, Biden "will recommit the federal government to respect Tribal sovereignty and strengthen the Nation-to-Nation relationship between the United States and Tribal Nations."

The moratorium on federal leasing will temporarily halt the auction of drilling rights. It will not, however, shutter ongoing development of federal resources on existing leases, meaning industry will still be able to drill new oil and natural gas wells and produce hydrocarbons, according to multiple people familiar with the plans.

The U.S. Geological Survey estimates that as much as a quarter of U.S. oil and gas production comes from federal mineral leases. Advocates see tomorrow’s expected order as a down payment on further action.

"I think the Biden team is going to go for it on this issue; there is momentum and political will to get the ball rolling during a less-antagonistic Congress," said Joel Clement, a senior fellow at Harvard Kennedy School’s Belfer Center for Science and International Affairs.

Clement was the top climate policy expert at President Obama’s Interior Department but resigned during the Trump administration after accusing the top brass of political interference.

The hurdles will be legal and fiscal, he said, noting potential compensation demands for leases already sold to oil and gas developers if future activity is banned.

Tomorrow’s action is not unexpected. Of Biden’s campaign promises surrounding the federal oil and gas program, a leasing pause was considered the most reasonable target by experts.

Some Native American tribes are pressing the administration to make clear that pending oil orders affecting development on public lands won’t apply to them.

But after pushback from the Ute Indian Tribe of the Uintah and Ouray Reservation, Robert Anderson, acting with the authority of the Interior solicitor, clarified in letters to federally recognized tribes yesterday that the 60-day order would apply only to non-American Indian lands.

Many Republicans have balked at the Biden climate actions, accusing the administration of divisiveness for its anti-oil stance.

The oil and gas industry has also reacted strongly to expectations of a leasing pause, saying the unintended consequence of a reduction in federal oil production will be an increase in imports from other countries where environmental standards are poor.

"We stand ready to engage with the Biden administration on ways to address America’s energy challenges but impeding American energy will only serve to hurt local communities and hamper America’s economic recovery," Mike Sommers, CEO of the American Petroleum Institute, said in a statement this week.

But while industry argues it needs a steady stream of drilling rights and permits to keep production activity and employment stable, environmental groups have called foul on the expectation of an outsize impact from a temporary, or even long-term, leasing ban.

Following the gung-ho permitting approach of recent years in which industry gathered drilling rights, green advocates argue companies have insulated themselves against an immediate impact to their bottom lines.

Sixty-two percent of federal oil and gas leases onshore were producing in a 2017 snapshot by the Congressional Research Service. Offshore, just 29% of leased acreage was producing at that time.

According to the Bureau of Land Management, industry held more than 26 million acres under lease as of 2019. Permitting ticked up in some areas during the Trump era; the pro-oil administration approved some 1,400 drilling permits.

Another order is expected to strengthen scientific integrity policies across the federal government. Scientific experts say the action is critical after the Trump administration spent four years undermining science-based policies on matters including environmental regulations, disaster preparedness and the coronavirus pandemic.

"We saw a lot of violation in the Trump administration, so it’s not a hypothetical," said Andrew Rosenberg, a director at the Union of Concerned Scientists, adding, "It’s occurred in every administration to some extent."

Science groups have specifically called on the Biden administration to establish far-reaching policies to ensure government scientists are not stifled by political interference.

Scientific integrity can manifest in many ways. In past administrations, government scientists have been censored, banned from offering Congress an unvarnished view of their work or cautioned not to talk about climate change.

"There is probably no better example than Anthony Fauci saying he felt liberated now that he could talk about the science," Rosenberg said, referring to the infectious disease expert who has been advising the U.S. coronavirus response. "But it happened across the administration."

In another high-profile example known as "Sharpiegate," former President Trump incorrectly tweeted that a hurricane was approaching Alabama and refused to correct his mistake after local experts offered a contradicting weather forecast. He showed a map marked up with a Sharpie at the White House.

He explained that NOAA has a scientific integrity process in place but that the Department of Commerce, which oversees NOAA, does not.

In all, the group cataloged 188 attacks on science during the Trump administration, Rosenberg said. That compares with 22 reported cases during eight years of the Obama administration.

They include establishing a clear process, minimizing conflicts of interest, encouraging open dialogue with the press and educating federal employees on their rights. The Biden order is expected to closely align with the recommendations, sources said.

Sources are also widely expecting Biden to include language within a larger climate executive order that would move the nation toward preserving 30% of its land and water by 2030, a goal that scientists have said is critical to avoiding a "tipping point" of natural ecosystem collapse in a warming world.

The effort, known as "30×30," has broad backing among environmental groups. It could call for federal action and mirror resolutions that have previously circulated on Capitol Hill.

In the previous Congress, companion resolutions were sponsored by Democratic Rep. Deb Haaland of New Mexico, Biden’s nominee to lead the Interior Department, and fellow New Mexico Democrat Tom Udall, who retired from the Senate last year. Vice President Kamala Harris was also a co-sponsor of the 30×30 resolution when she was a senator from California.

Advocates say preserving large swaths of ocean, wetlands and land will help species shifting as temperatures rise; preserve and protect natural carbon sinks in the form of forests, wetlands and ocean tracts; and ensure there are durable protections for ecosystems. They are also calling for a collaborative process through which federal agencies can engage with stakeholders and the public to help reach the goal.

Supporters of the effort are eager to see the details of what the executive order includes, which could shed light on what agencies will be closely involved and what existing authorities the Biden administration could tap into.

In 2018, the Center for American Progress warned the nation could see the loss of natural areas equivalent to the size of South Dakota by 2050 unless policymakers address a looming "conservation crisis." The group also called for a 30% conservation target, including both land and water, by 2030 (Greenwire, Aug. 6, 2019).

Today a group of more than 40 states and hundreds of local officials voiced support for the target in a letter to the Biden administration, which LCV coordinated.

"Achieving 30×30 will require an ambitious and inclusive movement that engages local, state, national and Tribal leaders, as well as private landowners, as part of the solution," they wrote. "We support a national goal of protecting and restoring 30% of land and ocean by 2030 and commit to taking action now in our communities and states to reach it."