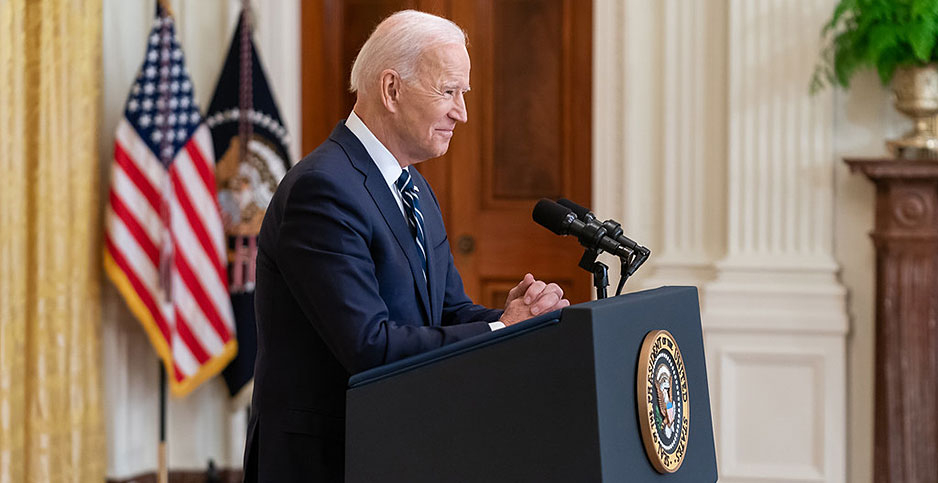 President Biden is expected to continue to sell his infrastructure and climate agenda to lawmakers tonight, even as he moves on to other priorities like his family and child care plan.

The president has framed his $2.2 trillion infrastructure package as the second part of his "Build Back Better" plan — an effort to get Americans back to work while confronting the crisis of a warming world.

The package includes hundreds of billions of dollars for classic infrastructure like roads and bridges as well as for climate programs like clean electricity standards and charging stations for electric vehicles. Biden has proposed to increase the corporate tax rate to offset the costs.

As he has done with infrastructure, Biden aims to pay for his new universal prekindergarten program by cutting taxes for middle-class families while making the "wealthiest Americans pay the taxes they already owe," a senior administration official told reporters last night.

"What you’ll hear the president explain tomorrow night — if people have other ideas about how to finance these critical investments, he is open to hearing them," the official said last night.

Biden is expected to use his first joint address to Congress tonight to lay out his latest $1 trillion spending package, billed as broad investments for children and families.

Just a couple of members of his Cabinet — Secretary of State Antony Blinken and Secretary of Defense Lloyd Austin — will attend the scaled-down and socially distanced event, White House press secretary Jen Psaki said yesterday. There will be no designated survivor.

Yesterday, lawmakers buzzed in anticipation, some of them weighing in about the extent to which they expect the deal-cutting former senator from Delaware to cut deals to tout bipartisanship.

"I think it’s always a good speech; it lays out aspirational goals and gives you encouragement [about] where our country should be going and how we should all unite and come together. … The president has the megaphone to do that, not just for our country but the free world," he said.

Manchin said he expects Biden’s speech to reiterate his administration’s calls for action on climate change and that he hopes the president will highlight the need for a "justice transition" away from fossil fuels like coal.

He said one policy he hopes the president will endorse is using tax credits to help parts of the country, like West Virginia, that are losing jobs as fossil fuel use declines.

Manchin also stressed that Biden should avoid making climate a partisan issue. "The United States is the only country that uses the climate issues as a political divide. The rest of them know it’s for real," he added.

Similarly, Sen. Tom Carper (D-Del.), chair of the Senate Environment and Public Works Committee, called himself a "big believer there are bipartisan solutions or lasting solutions."

"I think he is, too," he said of Biden, adding that he would like to see the president make the case for why Republicans and Democrats should find common cause on issues ranging from service transportation to transit to human capital.

Some Republicans have scoffed at the idea that Biden is keen on striking a deal after he passed the COVID-19 relief bill without any Republican support.

Yet Carper stressed that the president is "sincerely interested in and getting as close to bipartisan solutions [as] we can."

Sen. Susan Collins (R-Maine), one of the most moderate Republicans, did not seem so sure. "I want to hear him outline clearly a commitment to bipartisanship in pursuing the remainder of his agenda. And I really liked his inauguration speech, but I have felt that thus far, the administration is bound in a different direction," she said.

Collins added: "I want to see him pledge to be the unifier that he promised us he would be, and outline specific steps how he plans to accomplish that."

Progressive liberals like Sen. Bernie Sanders (I-Vt.) have expressed less interest in catering to Republicans and have urged Biden to charge ahead.

"I believe in bipartisanship, but I believe most importantly in getting the job done that the American people need," Sanders said when asked about working with lawmakers on the other side of the aisle.

"If Republicans are serious about addressing the major crises facing this country, that’s great; let’s work with them. If they’re not, we have to go forward alone and do what has to be done."

Sanders also touched on the debate about the word "infrastructure," which has been bandied about in Congress. He dismissed the idea that "infrastructure" amounts to simply roads and bridges, as some Republicans have suggested, and more broadly framed it as "the needs of the American people."

"It’s the foundations of what makes us society," he continued. "And that means making sure that our kids get a quality education, that we have the best-educated workforce in the world."