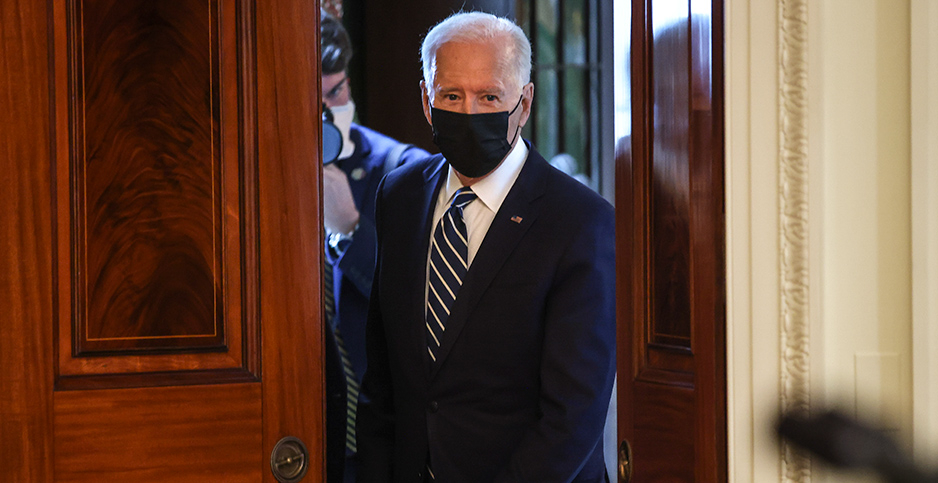 President Biden this week will make his pitch for a multitrillion-dollar green infrastructure package, but lawmakers and interest groups aren’t waiting for the details before trying to shape what may be the best chance to enact major climate policies in over a decade.

Biden will travel to Pittsburgh on Wednesday to detail his economic recovery package, with more details likely to emerge later in the week when the White House submits a "skinny" budget request to Capitol Hill.

The New York Times and The Washington Post reported last week that the overall package may total $3 trillion, with as much as $1 trillion in investments for roads, bridges, rail, electric grid upgrades and electric vehicle charging infrastructure.

The proposal may also address other domestic priorities, including housing, drug prices and other measures to address income inequality.

There’s been discussion of breaking the package up into components, with areas where it’s possible to win bipartisan support — like surface transportation reauthorization — moving through regular order.

More contentious provisions could be folded into a budget reconciliation package — a procedural option that would allow the bill to pass both chambers solely with Democratic votes, as happened with the $1.9 trillion COVID-19 relief package signed into law earlier this month.

Also unclear is whether and how the recovery package will be paid for, an already simmering flashpoint with Republicans who want to protect the GOP’s 2017 tax overhaul.

Asked whether he has made a decision about some of those details, Biden said yesterday, "I have, but I ain’t telling you."

Pressure from the left

The level of spending is likely to fall well short of demands from advocacy groups and liberal Democrats, who have called for at least $1 trillion in spending annually for a decade to tackle climate change and environmental justice (E&E Daily, March 23).

Sen. Ed Markey (D-Mass.), Rep. Debbie Dingell (D-Mich.) and Rep. Ro Khanna (D-Calif.) will appear with activists today at a virtual press event sponsored by the Green New Deal Network in support of the so-called THRIVE agenda — which stands for "transform, heal and renew by investing in a vibrant economy."

This afternoon’s news conference kicks off a week of events nationwide to nudge the White House and Congress toward a broad climate-focused package, offering a preview of the progressive pressure lawmakers will feel as the infrastructure debate unfolds.

The actions "reflect growing consensus that the $3 trillion economic recovery plan floated by the Biden administration this week falls short of the scale needed for a transformative investment in the country’s future," the Green New Deal Network said last week in a statement.

The day after Biden’s Pittsburgh speech, the #BuildBackFossilFree coalition is launching a nationwide week of action to "escalate the demand for President Joe Biden to be a real Climate President by stopping all new fossil fuel projects."

Lawmakers and advocacy groups are already laying down legislative markers and policy requests ahead of the infrastructure push, which is expected to unfold over the summer and into September, when the current highway law expires.

Members of both parties have unveiled a flurry of climate- and energy-related measures in recent days, with a heavy emphasis on tax provisions (see related story). Lawmakers are also taking their priorities to Biden directly.

The National League of Cities (NLC) is urging congressional leaders to include a smorgasbord of clean energy, water and climate policies in the upcoming package.

In a letter sent to Capitol Hill today, the group is calling for a national renewable portfolio standard that aims to produce 50% carbon-neutral energy by 2030 and 100% by 2050.

NLC is also calling for funding for efficiency and conservation block grants, incentives for zero- or low-emission vehicles fleets, and electrical grid upgrades, as well as for climate risks to be incorporated in planning and policymaking across the federal government.

Led by Reps. Jerrold Nadler (D-N.Y.) and Doris Matsui (D-Calif.), the group is seeking the inclusion of climate resilience provisions similar to the $1.5 trillion infrastructure package passed by the House last summer.

That bill included $15 billion for the Army Corps of Engineers to address a backlog of resilience and rehabilitation projects, $3 billion in coastal restoration funding, and $1 billion for watershed resilience.

Groups such as the National Rural Electric Cooperative Association (NRECA) that have been sidelined in past relief proposals are also reviving their long-standing requests.

NRECA CEO Jim Matheson — a former Democratic representative from Utah — last week reiterated the group’s past calls to include legislation that would allow its nonprofit members to refinance Rural Utilities Service debt at lower interest rates.

"Many electric co-ops and their consumers are hurting as COVID-19 continues to bring health and financial hardships to rural communities," Matheson said in a statement.

"Congress can provide substantial relief to millions of electric co-op members simply by letting co-ops do what other businesses already can — refinance their debt at today’s low interest rates without a prepayment penalty. Every dollar co-ops save means more money in consumers’ pockets."

Pressure is also building for tens of billions of dollars in investments in rail and public transit.

The progressive group the National Campaign for Transit Justice is pressing for $60 billion for transit, including $20 billion in annual operating funds, $18 billion toward eliminating a 12-year maintenance backlog and $12 billion for capital investments. The group is also pushing for zero-emission transit bus fleets and the infrastructure to support them.

LeeAnn Hall, the campaign director for the effort, said the group’s overarching goal is ensuring a majority of Americans are within walking distance of frequent transit services by 2030.

She said the campaign grew out of concerns raised by riders’ groups over the past year that the pandemic was pushing already underfunded public transit systems deep into crisis.

"Right now, what we see is this historic sort of opening with both the crises, racial inequality and the climate, and a [push for] rebuilding an economy that works for everybody. We see transit as a central solution that makes a contribution to all of those priorities," she said.

Hall said the group does not have specific legislative strategy it prefers; it simply wants to educate lawmakers about the need for the funding and get as much of the $60 billion as possible for public transit.

A host of business groups are also seeking to affect the legislation by adding obscure provisions that could be worth tens of millions of dollars or more for the private sector.

For example, the Surety and Fidelity Association of America (SFAA) is pressing for language that would require bonding for public private partnerships authorized with Transportation Infrastructure Finance and Innovation Act (TIFIA) federal financing.

Simply put, bonding is an insurance policy of sorts provided by surety and fidelity firms to guarantee completion of a federal project even if a contractor were to default. Bonds usually cost a small percentage of an overall project’s price tag and have been required for most federal and state public works efforts for decades.

"In the past 10 to 15 years, there’s been a new project delivery method, public-private partnerships — we want to clarify that the requirement applies to those too," said Lee Covington, the president of SFAA, who says 95% to 99% of existing federal and state infrastructure projects are already bonded.

The proposal already has bipartisan support, and stand-alone legislation has been offered in both chambers, but the group sees an opportunity to attach it to the infrastructure bill since that would provide billions in TIFIA financing.

While pledging to seek bipartisan support for the recovery package, Democratic leaders have made clear that they will move unilaterally under budget reconciliation if need be.

"I think the American people know we have to do infrastructure in a new green way, and hopefully we can get [Republicans] to work with us, but as I said, if we can’t, we’re going to have to move forward," he said.

"In that meeting, we made abundantly clear: Please do not use the budget reconciliation process to pass an infrastructure bill," Rep. Rodney Davis of Illinois, the top Republican on the Transportation and Infrastructure Subcommittee on Highways and Transit, said last week during an appearance at the National Association of Counties legislative conference.

But Davis appeared open to the strategy of moving issues where there’s bipartisan support through regular order. "On some of the Green New Deal issues … if you’re going to use reconciliation, use it for the climate package," he said. "Don’t disguise a climate bill into a title that’s infrastructure."

Psaki said this weekend: "I don’t think Republicans in this country think we should be 13th in the world as it relates to infrastructure. Roads, railways, rebuilding them, that’s not a partisan issue. That’s a lot of what the president will talk about this Wednesday."