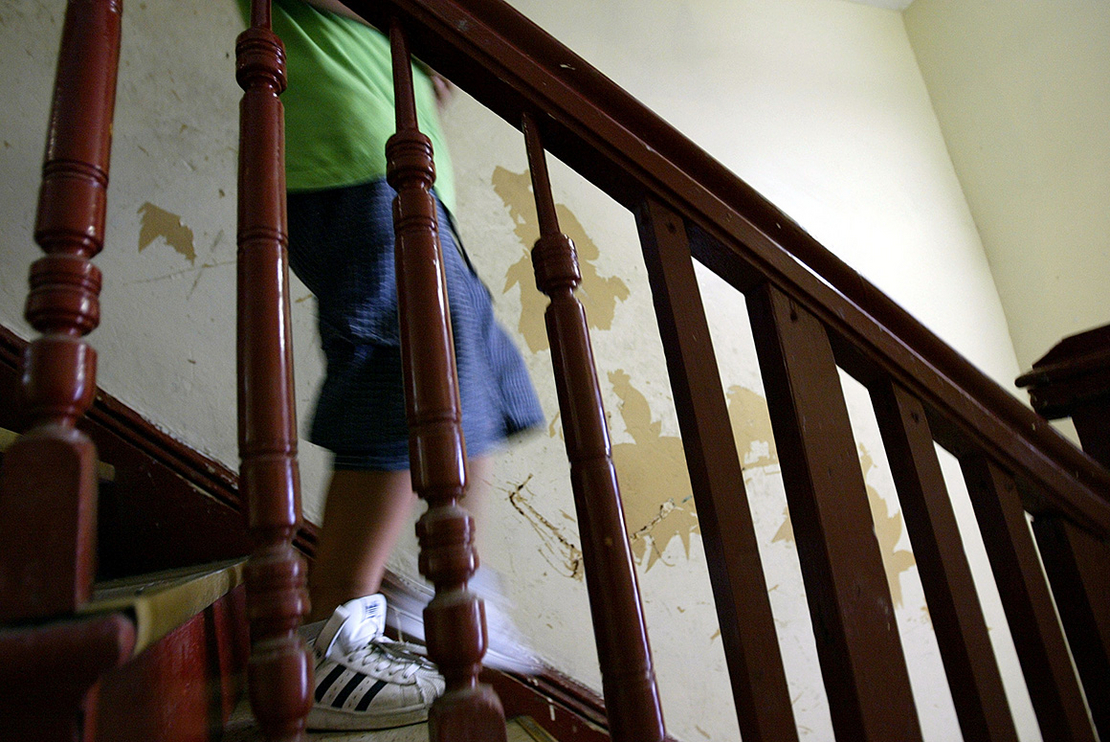 An upcoming federal strategy aims to reduce childhood lead exposure. A child is pictured walking past a wall with peeling paint. Contaminated paint has been identified as one exposure source for children. Spencer Platt/Getty Images

The Biden administration tomorrow is expected to release a new cross-government strategy for preventing lead exposure in children, with a focus on high-risk communities, according to sources familiar with the plan.

The same effort under former President Trump triggered infighting and was alleged to be an issue in the ouster of a top scientist who had called for tougher action to protect children from the toxic substance, which has cropped up in drinking water, paint and fuels.

EPA earlier this week announced as part of Lead Poisoning Prevention Week that it’s working with agencies like the Department of Housing and Urban Development and the Centers for Disease Control and Prevention to address lead, and plans to release for public comment a draft strategy for reducing lead exposure and disparities with an emphasis on vulnerable communities.

Sources say the strategy is slated to be a whole-of-government approach that touches on everything from President Biden’s vow to remove all of the nation’s lead service lines to eradicating the substance from paint and Superfund sites.

A first-of-its kind study last month found more than half the children tested had detectable levels of lead in their blood, which researchers say is tied to contaminated paint, water pipes and soil in poverty-stricken communities (Greenwire, Sept. 29).

EPA has identified nearly 1,200 Superfund sites where lead contamination is a concern and a potential source of exposure to children. Sources questioned whether the new strategy could potentially include more stringent requirements for remediating Superfund sites, given that the federal threshold for what constitutes a "concern” in children’s blood levels has changed.

Up until 2012, the CDC identified the “blood lead level of concern” in children as 10 micrograms of lead per deciliter of blood, before halving that amount to 5 micrograms. The CDC says that value is based on the nation’s population of children under 5 who are in the highest 2.5 percent of kids when tested for lead in their blood.

The strategy is expected to arrive tomorrow, just as EPA considers how and whether to revise its Lead and Copper Rule, but sources said the agency has until mid-December to unveil the final regulation. Advocates are calling on EPA to include language that would require the removal of all lead service lines (Greenwire, Aug. 24).

Also in the works, according to EPA, is guidance the agency plans to issue to help states and communities identify lead service lines, the most significant sources of lead in drinking water. Recently, tech giants like Google have announced plans to infuse grant money into companies and environmental justice groups to help publicly map lead lines in the most vulnerable communities (Greenwire, Sept. 28).

Locating and tracking the removal of lead service lines is a problem across the nation, and multiple majority-Black communities in Michigan recently snagged national headlines for high lead levels in drinking water, putting pressure on state and national regulators and lawmakers to step in and ensure the safety of drinking water (Greenwire, Oct. 20).

EPA’s previous Lead Action Plan under the Trump administration was released in 2018 and was clouded in controversy after former EPA Office of Children’s Health Protection Ruth Etzel alleged she was sidelined from her post due to disagreements about the document.

Though EPA has maintained that Etzel was removed from her post due to problems with her leadership, Etzel has said she ran afoul of the Trump administration for arguing that the strategy should include regulatory goals (Greenwire, Dec. 19, 2018).

Ultimately, the document set goals of reducing children’s exposure to lead sources; identifying children who have been exposed to lead and improving their health outcomes; communicating more effectively with stakeholders; and supporting and conducting critical research to inform efforts to reduce lead exposure and related health risks.

Though the Trump administration said the goals were to serve as a road map for all federal agencies, which would in turn develop their own performance measures for attaining them, the strategy was roundly panned by health experts for not including performance measures, deadlines and funding for completing the goals.

One advocate called the plan "disappointing" at the time, and another said it amounted to mere "talk."