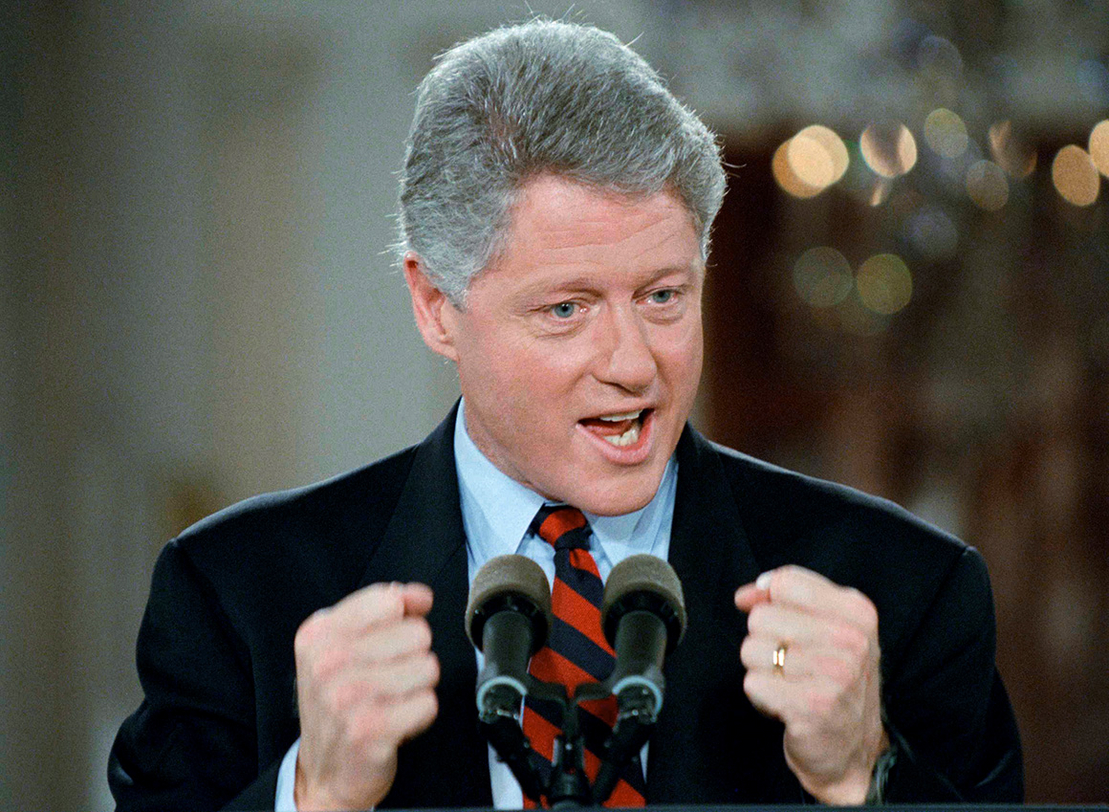 President Bill Clinton during a news conference at the White House in 1994. He signed the nation's first executive order on environmental justice the same year. AP Photo/Wilfredo Lee

The White House is updating a “sacred text” on environmental justice.

The executive order, signed by President Bill Clinton in 1994, was the first governmentwide acknowledgment that environmental and public health burdens fall disproportionately on poor and minority communities. It was also the first time the executive branch accepted that it has the legal authority — and obligation — to blunt those impacts wherever it can.

Now Executive Order 12898 is being carefully reviewed by the White House, with input from outside experts, an administration official told reporters on a recent call. He described the 28-year-old order as a “sacred text” for which officials would propose changes in the coming months.

Beyond that, the White House has said little about how it plans to change the Clinton-era directive.

The White House Environmental Justice Advisory Council, or WHEJAC, which is made up of outside experts from advocacy and academia, offered copious recommendations 13 months ago on how to revise the executive order. But in a report to Congress last week, the White House Council on Environmental Quality focused on other planks of the president’s environmental justice agenda, including implementation of his investment initiative for disadvantaged communities and a beta screening tool to identify those communities (Climatewire, June 1).

The Clinton-era order received only a small mention in the 201-page report.

“The process of developing executive orders is lengthy because it involves a multi-step institutional review in preparation for the President to reach a decision,” CEQ stated in its report, adding that it was working “diligently” to find a “durable, impactful, and effective approach.”

Biden issued his own executive order on climate change and environmental justice a week after being inaugurated last year. It gave federal agencies a deadline of May 2021 to submit recommendations for updating the 1994 executive order to climate adviser Gina McCarthy. The White House says that deadline was met.

Environmental justice experts, including members of WHEJAC, which Biden created last year, say they’re less concerned about timing than about the scope and strength of the coming revision. The Clinton executive order was a watershed moment for the environmental justice movement and has survived four subsequent administrations.

But its objectives were never fully realized.

“So on one side, thank you very much, we really appreciate it, because if you’re releasing an executive order on environmental justice, well, then that must mean there is some environmental injustice,” said Richard Moore, co-chair of WHEJAC and a past chair of the advisory council to EPA established under the Clinton executive order. “But it could have been a lot deeper.”

The ’90s-era directive required a small cadre of domestically focused federal agencies led by EPA to participate in an interagency council on environmental justice. The list of entities involved has since grown. Biden’s order last year expanded membership to include 18 federal agencies and White House offices working on both domestic and international issues. It also made the White House the group’s convener instead of EPA, which Moore said elevated the issue.

The Clinton executive order asked agencies to incorporate environmental justice in their strategic plans. But Moore, who is co-director of Los Jardines Institute in Albuquerque, N.M., said some did a better job than others.

Biden told environmental justice advocates in meetings prior to the 2020 election that he planned to unveil a revision to the Clinton executive order during his first 100 days in office — and they told him not to, according to Moore. A speedy rollout could have prevented grassroots groups from offering input, he said.

History of the Clinton E.O.

Robert Bullard, a distinguished professor at Texas Southern University who is often called the father of environmental justice, remembers meeting with EPA Administrator Bill Reilly and other Bush administration officials to present ideas that came out of an important conference at the University of Michigan in 1990. When Clinton was elected in 1992, Bullard and Benjamin Chavis, another civil rights leader, joined the transition team for EPA. Deeohn Ferris, who had established the Washington Office on Environmental Justice, took the lead in crafting a white paper calling for EPA to be added to the Cabinet, for more staffing and funding, and for more diverse regional administrator appointments.

Ideas poured into her office from communities all over the country, Bullard said.

“People were sending in faxes and on the phone telling us what kinds of things they wanted to see happen with the new administration,” he said in an interview.

It became clear that in the absence of legislation, an executive order would be the best way to ensure that environmental justice concerns were integrated into as many federal programs as possible, Bullard said. Al Gore, who was a senator at the time, and Rep. John Lewis (D-Ga.) had sponsored environmental justice legislation in 1992 to create a moratorium on toxic chemical facility permits in communities that were already inundated with pollution sources. But the effort had stalled.

“The environmental justice executive order came about as a proxy for not having a law in place to deal with this,” said Bullard.

In lieu of new legislation, the order drew on authorities granted by the Civil Rights Act of 1964 and the National Environmental Policy Act (NEPA).

The civil rights law barred states and other recipients of federal funds from discriminating on the basis of race, color or national origin. NEPA required environmental impact assessments before a project could go forward to consider adverse impacts on vulnerable populations.

Clinton’s order was a landmark achievement, Bullard said, but it has never been fully implemented. Within the federal government, the response to the order has been uneven. All 10 EPA regional offices have their own strategic plans for environmental justice, but they vary drastically in quality. The plans serving the southern U.S. tend to be the weakest.

“That disturbed a lot of us,” he said. “The environmental justice movement and the civil rights movement — both movements were born in the South.”

The quality of environmental justice planning also differs greatly from agency to agency. The Department of Transportation adopted a stronger directive on environmental justice than E.O. 12898, Bullard said, in part because Clinton Transportation Secretary Rodney Slater was Black and personally familiar with the way highway funding had been used historically to divide and undermine communities of color.

Bullard said the federal government also had a dismal track record when it came to enforcing nondiscrimination by recipients of federal funding, especially states.

“The executive order as it got implemented down in the regions oftentimes did not change the behaviors of bad actors,” he said. “There’s no teeth.”

Any revision to the Clinton E.O. would only be successful if it led agencies to beef up their oversight of the programs they administer, advocates said. That includes a new willingness to claw back funding when states spend it inequitably.

Biden promised that 40 percent of the benefit from climate and clean energy investments would accrue to disadvantaged communities — an initiative known as Justice40. But as funds appropriated in last year’s pandemic and transportation packages are being spent, the administration has struggled to show how Justice40 is being implemented.

Bullard, who is also a member of WHEJAC, said he repeatedly asked the White House for information on the 40 percent commitment but received no answers until the White House released a press release last week announcing $29 billion in Justice40 “new funding opportunities.” The White House told E&E News that the figure included allocations from fiscal 2021 and 2022 appropriations and from the infrastructure law enacted in November.

Mustafa Ali, vice president of environmental justice at the National Wildlife Federation and a former senior adviser at EPA, said enforcement of nondiscrimination should be at the heart of any revision to the Clinton executive order — especially when it comes to ensuring that poor and nonwhite communities receive a fair share of federal investment.

He also said the inclusion of international programs and treaties under the E.O. would be a game changer.

“I see it as the next iteration of this work,” Ali said.

He pointed to Congo, which produces cobalt used in the manufacture of electric car batteries.

“There are all kinds of worker rights and children’s rights violations that are going on at this moment around the mining of those critical minerals in Africa, in the Congo,” said Ali. “So if we’re serious about creating a new 21st-century paradigm, then environmental justice has to be honored on the international stage.”