Biden: ‘Today is jobs day at the White House’ 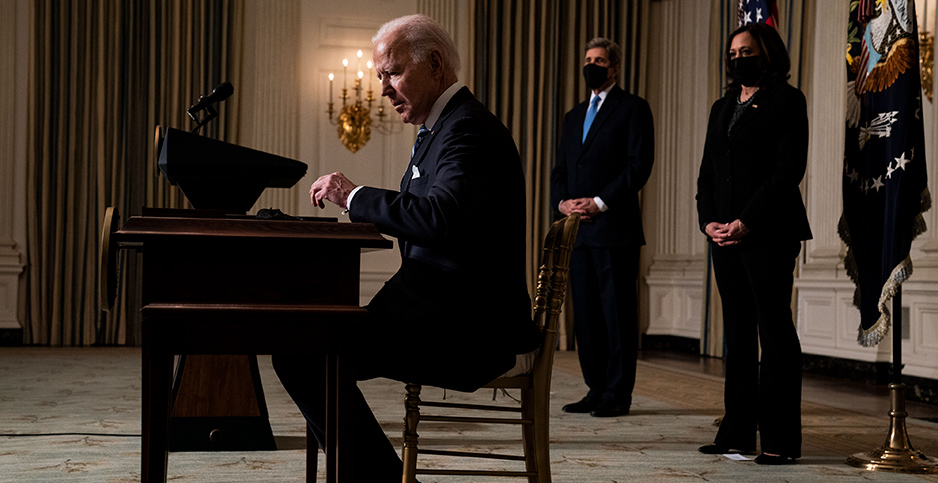 President Biden signed a trio of executive orders this afternoon to tackle climate change and environmental racism while selling the initiatives as a green job creation plan.

The orders include freezing new oil and gas leases on federal lands, elevating and de-politicizing science across federal agencies, conserving 30% of U.S. land and water, investing considerably in minority and Indigenous communities, and restoring a scientific advisory panel (Greenwire, Jan. 27).

The orders are shaping up to be among the most significant reversals of the Trump administration’s four years of "energy dominance" and weakened environmental and public health protections.

The president sought to strike a message that could appeal to Americans of all stripes. He talked about creating better, cleaner jobs, mentioning the millions of people who have been out of work since the pandemic struck.

And he said climate change poses a direct threat to more than two-thirds of military operations, calling the initiative important for conservatives too.

He did not mention the Green New Deal, but his plan to achieve a carbon pollution-free power sector by 2035 and create well-paying, unionized clean energy jobs has similar aims.

The youth-led Sunrise Movement, which has pushed Democrats to take audacious action, said in a press release that today’s "actions make clear that Biden hears our generation’s demands loud and clear, understands the power of our movement, and is serious about using executive power to deliver on his campaign promises."

Biden reaffirmed a promise to not ban hydraulic fracturing, saying he would "protect jobs and grow jobs." There are more than a million abandoned oil wells in the country that need to be capped, he said.

Biden also said environmental justice "will be at the center of all we do," pointing specifically to "Cancer Alley" in Louisiana and the Route 9 corridor in Delaware.

One of the orders pledges to deliver "40 percent of the overall benefits of relevant federal investments to disadvantaged communities," and it launches a scorecard to track the progress.

For Kerene Tayloe, director at the nonprofit We Act for Environmental Justice, said the orders are a good sign the administration understands and is committed to communities that suffer from legacies of pollution.

"The communities that have been harmed need to be able to dictate where that 40% should go — whether that is looking at climate adaptability to retrofit our homes when storms happen, when extreme heat happens, and even the creation of green jobs," said Tayloe.

The group, based in New York’s Harlem, has a solar jobs training program, she said, and those programs need to be scaled up across the country.

That will be carried out by Biden’s new Civilian Climate Corps, which is modeled on the New Deal’s job creation program during the Great Depression.

That is particularly encouraging for Tayloe, who stressed that climate change work needs to transcend just EPA. She cited the departments of Energy, Transportation, Agriculture, Housing and Urban Development, and Health and Human Services. "All of the agencies must consider the environmental impact of their work," she said.

"The first two years will be critical," she said. "A lot needs to happen this year. There are really great career staff who have literally been hiding under their desk who need to be motivated to do their work."

To that end, Biden’s order specified that evidence-based policies should take precedent at the agencies. The effort builds on an Obama scientific integrity policy, but Lauren Kurtz, executive director at the Climate Science Legal Defense Fund, noted: "The last four years showed the process is far from done."

John Holdren, who served as President Obama’s science adviser, said he was not surprised by Biden’s assertive approach to science. "He is science savvy and fact friendly, and it’s showing," said Holdren.