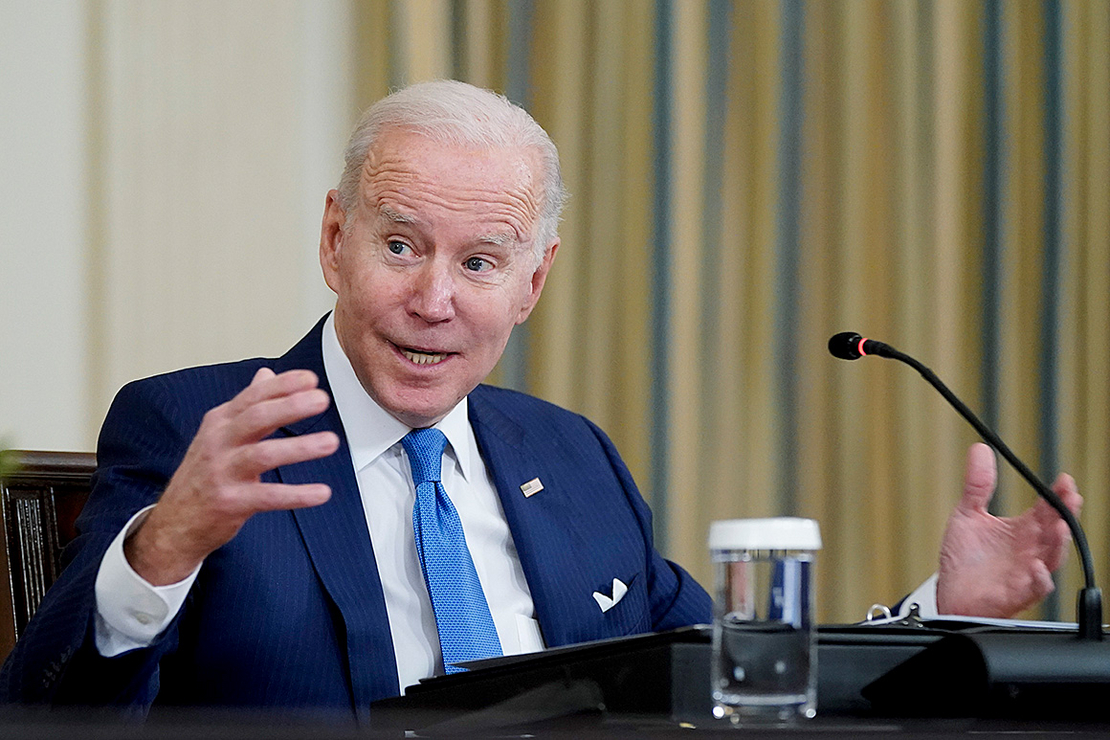 Many of the nation’s largest electric companies said yesterday they would meet with lawmakers “every week, day in and day out” until Congress passes major clean energy tax credits, although the fate of any legislation remains up in the air.

In an afternoon meeting with President Biden, CEOs from major investor-owned utilities stressed how important the federal government’s help is to decarbonizing the U.S. power sector by 2035. Congress must figure out a way to pass the tax incentives for renewable energy and transmission to support those technologies given the uncertain future of the “Build Back Better Act,” they said.

“The tax credits will make more sophisticated energy infrastructure much less expensive,” said Pat Vincent-Collawn, CEO of New Mexico-based PNM Resources Inc. She explained to Biden that large solar farms typically are located far away from large cities that use their electricity, so that’s why building more transmission lines to transport the electrons is key.

“It will be absolutely critical to our nation’s clean energy infrastructure,” she said.

The Edison Electric Institute, the trade group that represents U.S. investor-owned electric utilities, said before the meeting it wants the option to choose between production tax credits and investment tax credits for solar, as well as the option to immediately apply those tax benefits upfront, a move that would lower initial costs.

The group has also called for a 100 percent direct-pay option for all clean energy credits; a new tax credit for existing nuclear reactors; and one for transmission, energy storage and hydrogen.

Prior to the event, EEI executives briefed Wall Street investors and analysts at the Nasdaq MarketSite.

There, Brian Wolff, EEI’s chief strategy officer, gave a nod to the meeting with Biden and doubled down on the electric companies’ efforts to ensure those tax credit proposals become law.

“We’re going to be up there on the Hill until the bills pass and until we get the jobs done,” Wolff said.

Wolff, who made the “every week, day in and day out” comment, said he’s optimistic that something will come together next quarter.

“We’re going to beat that drum,” he said, later adding, “It’s really not a matter of if, it’s a matter of when.”

The infrastructure law adds up to more than $100 billion for the electric utility industry alone, Wolff said. The new law is also the largest wholesale change at the Energy Department, he said.

“Through careful planning and partnerships, we can ensure that everyone benefits from the clean energy transition,” Wolff said.

An aggressive clean energy transition will be a pricey one, especially for the electricity industry, which is among the most capital-intensive sectors in the United States. The industry collectively spent $143.3 billion in capital expenditures in 2021, EEI said.

“Those benefits actually flow through to our customers and the economy,” Akins of AEP said at the White House.

AEP pushed back against an earlier Biden clean energy proposal, the Clean Electricity Performance Program, arguing that it would jeopardize the reliability and resiliency of the electric grid (Climatewire, Sept. 15, 2021).

The Columbus, Ohio-based company operates two large coal plants in West Virginia. AEP has plans to cut CO2 emissions 80 percent of 2000 levels by the end of the decade and add 16 gigawatts of renewable energy by that time as well.

Yesterday, Biden keyed in on that transition for the coal-heavy company.

“It’s good to see you expanding into wind and solar; tell me about the expansion and the renewables,” he said.

Akins said the plan to add renewables presents an opportunity to work with unions and to save customers billions of dollars. The challenge is siting and building transmission to support all of those renewables, he said.

“For us, it’s important to scope those projects,” he said. “The savings associated with the renewables will help us with the transition.”

Some communities are pushing back on the idea of agricultural land and other places being used for large scale wind and solar farms. Biden asked what the electric companies are hearing on those types of arguments, using the opportunity to also take a swipe at former President Trump, who claimed in 2019 that wind turbine noise causes cancer.

“Generic question: Are you getting less resistance when you talk about wind and windmills? I know they cause cancer,” he said, drawing laughter from the room. Experts have debunked that claim.

The “Build Back Better Act” remains stalled in the Senate after Senate Energy and Natural Resources Chair Joe Manchin (D-W.Va.) announced his opposition in December.

Democrats say they largely agree on the $320 billion in clean energy and electric vehicle tax credit expansions contained in the package, despite a few quibbles about the specifics. But Manchin and the White House are at loggerheads about spending levels and specifics in some of the broader social spending provisions, leaving negotiations stalled and the current version of the bill passed out of the House last year effectively dead.

Still, yesterday’s CEO meeting was one of several lobbying campaigns by powerful interests in support of the $1.7 trillion package.

More than two dozen companies, including utilities and major energy players, signed on to a letter yesterday urging congressional leaders to pass the climate and energy provisions of the package.

“As negotiations on Congress’ legislative priorities proceed, we urge you to work to overcome the present impasse and see these historic climate and clean energy investments are realized,” the companies wrote to House Speaker Nancy Pelosi (D-Calif.) and Senate Majority Leader Chuck Schumer (D-N.Y.).

“Their enactment would not only help solidify America’s global leadership in addressing the climate crisis, but also create a foundation for the long-term prosperity and resilience of communities across the United States.”

Environmental groups, meanwhile, are launching an advertising push. Clean Energy for America announced a six-figure ad buy yesterday, part of a $3 million “Build Back Better” campaign by a coalition of environmental groups ahead of the State of the Union on March 1.

At a White House briefing yesterday, press secretary Jen Psaki was asked how much Biden was relying on the electric companies to make clean energy transitions on their own absent federal legislation. Psaki said industry leaders have made it clear they know the future is clean energy.

“So, there is an incentive for them to act and move in that direction,” she said. “And, certainly, the president agrees with that. And there are a number of steps, even as we’re working to continue to push to get Build Back Better passed, that we have already passed into law as a part of the infrastructure bill.”

This includes building a network of electric vehicle charging stations and tax credits for EVs, she said.

Federal policy can help direct these new investments, which are poised to have a long life, said Emily Fisher, EEI’s general counsel and corporate secretary, during the Wall Street briefing.

Absent that, the states, investors and others are in the driver’s seat, she said.

“When states are in the driver’s seat, it can be particularly challenging for our member companies who serve different states,” Fisher said.

EEI also issued a statement from Kuhn, its president, following the meeting.

“The suite of tax incentives currently under consideration will create a level playing field that recognizes the role of electric companies in deploying more clean energy and will help to preserve the existing nuclear fleet, so new clean energy deployments contribute to additional emission reductions,” Kuhn said.