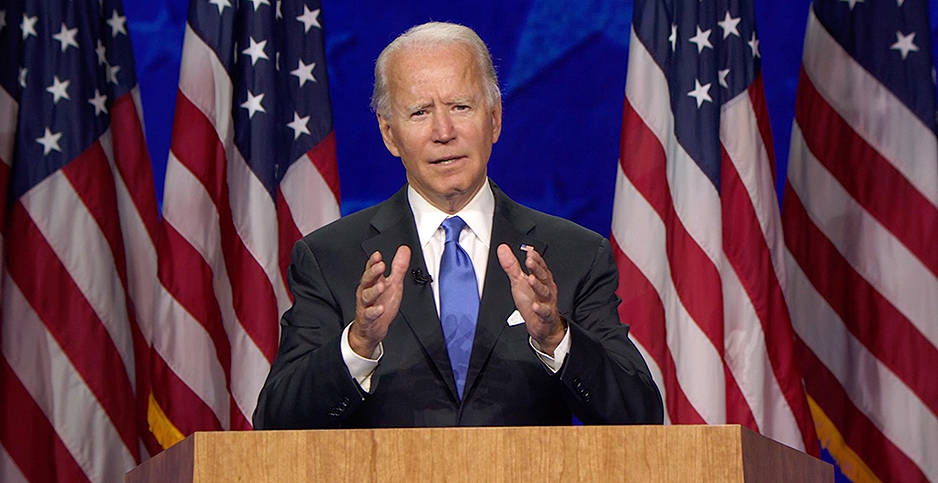 Joe Biden cloaked himself in the language of climate activists and union workers last night as he delivered one of the most important speeches of the 2020 election.

Accepting the Democratic presidential nomination, Biden cast the election as a choice between creating clean energy jobs and pursuing environmental justice, or succumbing to the "existential threat" of climate change.

He invoked President Franklin Roosevelt’s New Deal as he told voters that curing uncertainty and fear would take a president who extends a helping hand to everyone, regardless of their race, job or political affiliation.

"History has delivered us one of the most difficult moments America’s ever faced. Four — four — historic crises, all at the same time. A perfect storm," he said.

"The worst pandemic in over 100 years. The worst economic crisis since the Great Depression. The most compelling call for racial justice since the ’60s. And the undeniable realities and the … accelerating threats of climate change."

Biden’s speech capped a Democratic National Convention that has seen the party rally around climate as a unity issue. It wasn’t without peril. Tensions flared over the party’s fossil fuel platform, and Republicans have wielded the issue as one of their main attacks on Biden.

Nevertheless, the former vice president’s speech earned high marks from virtually every corner of the Democratic Party, including some of his harshest critics in the climate movement.

After a primary in which he struggled to win young voters, Biden said he had heard their calls for climate justice.

"One of the most powerful voices we hear in the country today is from our young people. They’re speaking to the inequity and injustice that has grown up in America. Economic injustice. Racial injustice. Environmental injustice," he said.

"I hear their voices, and if you listen, you can hear them, too. And whether it’s the existential threat posed by climate change, the daily fear of being gunned down in school, or the inability to get started in their first job — it will be the work of the next president to restore the promise of America to everyone."

Earlier in the night, a video showed him speaking with union workers about bringing more people into the middle class through a massive energy build-out. And in his speech, he called for building more clean energy infrastructure as a way to strengthen organized labor.

"We can, and we will, deal with climate change. It’s not only a crisis; it’s an enormous opportunity: an opportunity for America to lead the world in clean energy and create millions of new, good-paying jobs in the process," he said.

Biden’s emphasis on climate jobs pointed to the overlapping influence of unions like the International Brotherhood of Electrical Workers as well as the climate movement’s activists.

Republicans pointed to that influence as indication that Biden would be beholden to the political left.

"By accepting his party’s nomination tonight, Joe Biden has formally become a pawn of the radical leftists," President Trump’s campaign said in a statement.

During the speech, Trump said Biden was all talk.

"In 47 years, Joe did none of the things of which he now speaks. He will never change, just words!" Trump tweeted.

Jumbling the Republican response were notes of grudging praise from a few conservatives, some of whom have cast the 77-year-old Biden as senile.

On her Fox News show, Laura Ingraham said Biden "exceeded expectations" in delivering "a good speech, and it was — for what he was doing — very emotional."

That scattershot response pointed to what Andrew Yang, the tech entrepreneur who ran for president, identified as Biden’s political strength.

"The magic of Joe Biden is that everything he does becomes the new reasonable," Yang said before the nominee spoke.

"If he comes with an ambitious template to address climate change, all of a sudden, everyone is going to follow his lead."