Biden wants a national efficiency standard. Would it work? 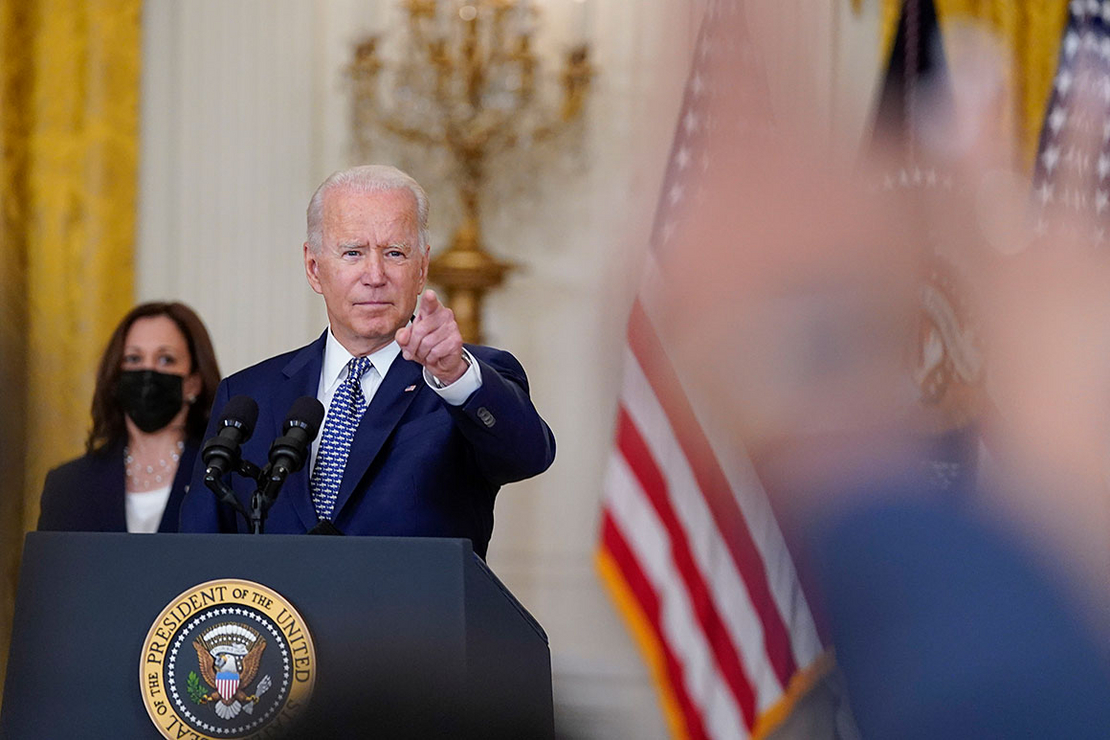 President Biden has backed a national energy efficiency standard, but it's unclear if the concept has traction. AP Photo/Evan Vucci

During his 2020 campaign, President Biden began pitching an energy efficiency and clean electricity standard to push the United States to carbon-free electricity by 2035 — a target now being weighed in Congress.

Biden repeated his support for the dual-standard approach in a tweet two weeks ago, noting the need to act to curb the effects of climate change that “Americans across the country can see and feel.”

But his administration has not offered details on the energy efficiency part, and it’s unlikely to be included in the Senate version of a clean electricity standard (CES) — now called a clean electricity payment program — that supporters hope to include in the sweeping $3.5 trillion Democratic budget resolution unveiled last week.

The omission is frustrating advocates who say an efficiency standard could help slash emissions significantly and reduce the demand for energy.

Twenty-seven states and the District of Columbia already have energy efficiency standards that require utilities to save energy through programs for consumers. The council says the standards save enough electricity each year to power 2 million homes.

However, efficiency standards have run into opposition in some states, and it’s unclear how such a plan would fare nationally.

Devin Hartman, director of energy and environmental policy at the free-market focused R Street Institute, said state initiatives have been controversial when applied to commercial operations, with industrial and large commercial users pushing back because they see them as eliminating a competitive edge.

In Congress, the focus is on other aspects. ACEEE is talking with lawmakers in both chambers, Nadel said, and is hopeful that an efficiency standard could be wrapped into the reconciliation legislation or passed separately. Rep. Peter Welch (D-Vt.) told E&E News that he will push for the provision in the House version. Biden included both standards in his campaign literature and in the $2 trillion infrastructure plan that he introduced in March.

“Biden was right to include this in his plan, but Congress needs to work on the details and pass it,” Nadel said.

“We’ve got to fundamentally transform the power sector,” said Sam Ricketts, co-director of the climate group Evergreen Action, which helped develop the clean electricity standard that Senate Democrats have embraced. “Energy efficiency is an important goal, but it is a different goal than driving forward to all carbon-free power generation.”

Ricketts said that allowing utilities to credit energy efficiencies could result in “inadvertently undermining” the need to press forward on carbon-free electricity.

“We’re trying to get utilities to reduce their polluting resources and increase their clean resources,” Ricketts said. Awarding credit for efficiency gains could offset gains from cutting the use of polluting sources or generating more clean energy, he said.

“It’s an important goal in itself,” Ricketts said of energy efficiency. “But it cannot displace the critically important goal that a CES has of transforming from 60 percent polluting resources today to just 20 percent by 2030, on the route to zero by 2035.”

Similarly, Bianca Majumder, a policy analyst for energy and environment policy at the Center for American Progress, has advocated for a national energy efficiency standard, but said some recent modeling by Evergreen Action and others suggests it would be “impossible to connect the two regulatory structures as a singular policy” because the goal is to create a faster path to clean energy.

“We need to expand the grid, but we can’t do one coherent standard with both,” she said. “It comes down to how much we are promoting clean energy versus reducing emissions.”

A clean standard and an energy efficiency provision were combined in the sweeping Waxman-Markey climate change bill in 2009 that failed to pass the Senate. At the time, some Republican members of Congress questioned whether a national standard would be difficult to implement through federal agencies and said such an approach could raise energy costs for consumers.

Majumder also said the new goal is an even faster pivot to clean energy than a decade ago.

Crediting utilities for energy efficiency could cut into a path to 100 percent, she said, because it requires focusing on energy generation and deployment.

Some Senate Democrats, led by Sen. Tina Smith (D-Minn.), are leaning toward an incentive-based clean electricity mandate they believe will hasten the transition to clean energy as well as meet the rigid Senate rules for legislation they hope to pass with a simple majority vote.

“Energy efficiency is one of the most powerful tools for reducing emissions — and it can also save consumers and companies serious money,” Smith told E&E News. She noted that the larger budget resolution also contains efficiency measures, including her bid to boost retrofitting for schools and public buildings as well as consumer rebates for home electrification and weatherization.

The provision could, however, make it into the House version. That chamber is expected to cut its recess short and return Aug. 23 to take up the budget resolution and Welch, the Vermont Democrat, said he wants to see the standards combined.

“As a policy, it’s proven to be extraordinarily effective,” Welch said of state energy efficiency standards, arguing that states that have adopted them have four times as much the energy savings as those that have not. “The goal is to reduce carbon emissions as quickly as possible with all ways to help achieve that.”

Welch said he’s aware of the restrictions the Senate faces in passing legislation with a razor-thin Democratic majority, but said there is considerable support in the House for melding the provisions.

“We’re all on the same page here on the Biden and Democratic side: maximum carbon reductions,” he said. “Obviously, there are certain political challenges … but policywise, this really makes sense, and I’m going to do all I can to include it.”

“My view is by any means possible,” he said.

The “Clean Electricity Payment Program” called for in the budget resolution released by Senate Democrats charges the Senate Energy and Natural Resources Committee with writing the language.

It would essentially deliver direct payments to utilities that deploy a certain amount of clean energy and levy penalties on those that do not.

Smith told E&E News that the program would be “designed to make the incentives so powerful that utilities choose not to pay the fee because of the benefit of getting incentives."

The White House did not comment on the standards, though Biden and other administration officials, including Energy Secretary Jennifer Granholm and White House national climate adviser Gina McCarthy, have called a clean energy standard essential to their efforts to tackle climate change.

At the state level, Texas in 1999 under then-Gov. George W. Bush (R) became the first to adopt an energy efficiency resource standard (EERS), according to data collected by the National Conference of State Legislatures.

The plans generally require utilities to achieve energy savings targets based on the amount of electricity or natural gas sold in the state. They involve customer-focused energy efficiency programs, such as discounts on efficient appliances and equipment and technical assistance.

Virginia in 2020 became the latest state to adopt a standard when its Legislature passed a sweeping clean energy package.

Although most states in recent years have updated or expanded their energy efficiency policies, the National Conference of State Legislatures noted that Florida and Indiana have run into roadblocks.

Indiana’s energy efficiency standards went into effect in 2009, but the state became the first to repeal them in 2014, said Kerwin Olson, executive director of the Citizens Action Coalition, which supported the efficiency measure.

A “strong aversion to mandates” and opposition from utilities and the industrial sector contributed to the demise of the measure, which was signed into law by former Republican Gov. Mitch Daniels, Olson noted.

“It wasn’t passed by some left-leaning environmentalist; it was passed by Gov. Daniels, who recognized the benefits of energy efficiency,” Olson said.

The Indiana Energy Association, which said at the time that it did not sponsor the repeal but supported it, said utilities could still continue voluntary energy efficiency programs.

But supporters say the state programs are more effective because they impose must-reach targets. According to the ACEEE, states with efficiency requirements experience an average of four times the level of electricity savings from utility programs compared with states without them. It found that in 2019, the standards saved consumers an additional 22 billion kilowatt-hours.

“For the most part, they’ve done pretty well, and consumers tend to like them,” ACEEE’s Nadel said of state efficiency measures. “We see this as one of the bigger things Congress can do to meet climate goals.”