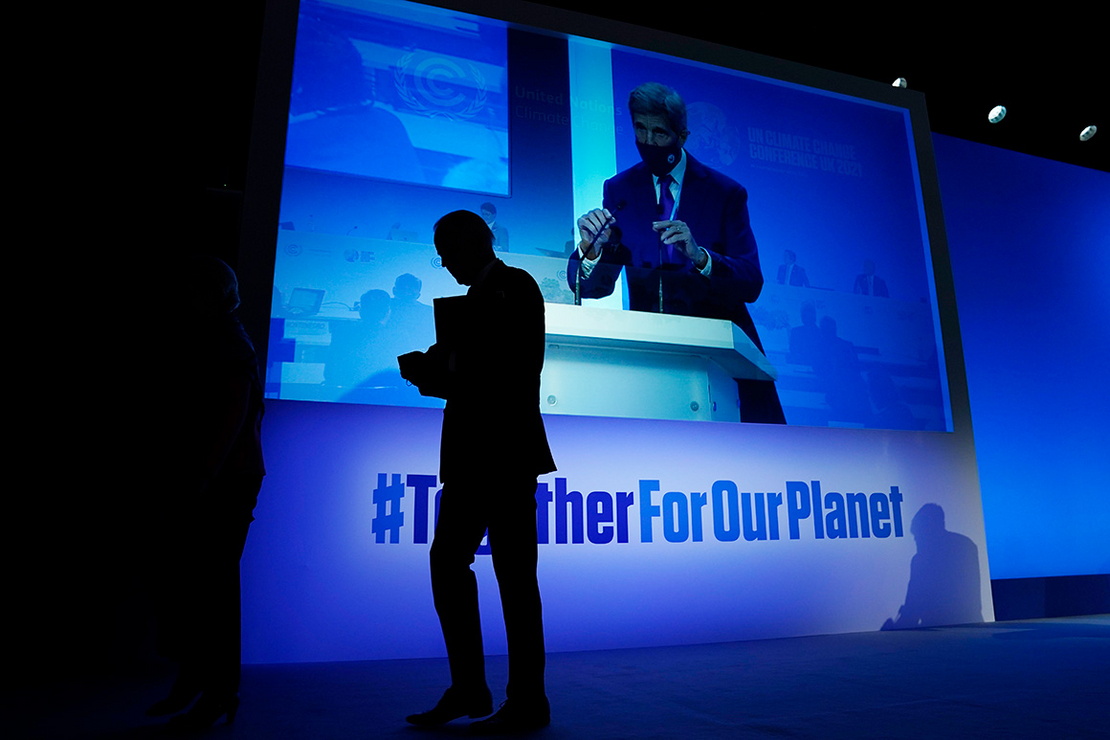 President Biden walks off stage at the COP 26 U.N. climate summit in Glasgow, Scotland, as John Kerry, the U.S. climate envoy, is seen taking the podium on a screen. AP Photo/Evan Vucci

President Biden came to office 12 months ago promising an antidote to years of American climate denial and absenteeism. The U.S. would again lead the world “by the power of our example,” he said at his inauguration.

But political gridlock at home has undermined his credibility abroad. And delays in corralling the money that poorer countries need for their own energy transitions and to repair climate damage have sown anger and disappointment.

“The climate doesn’t really care about your effort, the climate cares about what you deliver,” said Jake Schmidt, director of the international program at the Natural Resources Defense Council.

At a press conference marking the end of his first year in office, Biden said there was support among lawmakers for $555 billion in energy- and environment-related provisions in the "Build Back Better Act," and he supported splitting up the bill to give those pieces a chance of moving forward.

Obstacles still abound, and the stasis Biden’s climate ambitions now face stands in stark contrast to the sprint he started last January, when he rejoined the Paris Agreement on his first day in office and laid out a sprawling climate agenda centered around slashing U.S. greenhouse gas emissions in half by 2030.

He brought back former Secretary of State John Kerry to lead a new office dedicated to climate diplomacy and started a pressure campaign to get the world’s biggest emitters to do more to cut their planet-warming pollution.

The U.S. helped push for an end to public financing of coal projects internationally, and it issued a policy last month that would squeeze off most fossil fuel financing abroad and reallocate it to clean energy development (E&E News PM, Dec. 10, 2021).

It isn’t just U.S. climate policy that Biden is aiming to transform. It’s the world’s. And the message of renewed U.S. leadership has reverberated throughout his speeches.

The administration deserves high marks for its whole-of-government approach to climate and for driving the conversation forward at multilateral gatherings like the Group of Seven and Group of 20, said Rachel Kyte, dean of the Fletcher School at Tufts University.

Biden’s domestic climate agenda is at a standstill after Sen. Joe Manchin (D-W.Va.) refused to support the $1.7 trillion "Build Back Better" package in the evenly divided Senate. The bill contained a historic level of funding for renewable energy, electric vehicles and other carbon-cutting programs.

Climate Action Tracker, a nonprofit research group, ranks the U.S. climate effort as “insufficient,” based in part on the absence of policies needed to reach its proposed targets.

“The U.S. has to lead by example. They are trying to do that by showing high ambition, but it’s not enough,” said Gustavo de Vivero, the lead U.S. analyst at Climate Action Tracker. “It’s really difficult to be in that leading position without showing action.”

The lack of action could have grave implications for the world’s efforts to prevent temperatures from rising to dangerous levels (Climatewire, Dec. 21, 2021).

U.S. emissions rose 6.2 percent last year over 2020 as the economy started to recover from pandemic-induced slowdowns. How the U.S., the world’s second-largest emitter, invests in long-term carbon reductions in the next few years will be key to whether the world can achieve its climate goals, de Vivero said.

Other countries will also need to deliver on their promises. And several major emitters — China, Brazil and Australia — will need to do more than what they’ve currently pledged.

Seeing those promises become reality will be the next step for the Biden administration, following a year of laying the groundwork.

Those efforts started in force last April at a virtual summit Biden assembled for world leaders to showcase what they were doing to tackle climate challenges. Major economies like Japan, Canada and South Korea increased their emission-cutting targets. Others, like India, would do so later.

In August, the U.S. Treasury Department issued guidance to curb fossil fuel financing from multilateral development banks (Climatewire, Aug. 17, 2021). And at the United Nations General Assembly, Biden pledged to double the money his administration had requested for helping developing countries transition to clean energy and adapt to climate impacts they are already witnessing.

“It was an enormous to-do list, and you can sometimes forget how much had to be done given where things stood at the end of the Trump administration,” said Pete Ogden, vice president for energy, climate and the environment at the United Nations Foundation, a nonprofit that supports U.N. activities.

But critics say those actions don’t make up for gaping shortfalls. The $5.7 billion the U.S. carved out for international climate finance was well below what’s considered its fair share given the size of its economy, studies showed. The United States also emerged as a roadblock in efforts to deliver on a lapsed commitment to provide billions of dollars in climate finance to poorer countries (Climatewire, Oct. 21, 2021).

It remains to be seen how the U.S. will rally other countries to vote against fossil fuel projects at the World Bank or International Monetary Fund, or how wide the exemptions are for international fossil fuel financing, observers say.

“The thing about actions to tackle climate [change], it isn’t just saying, ‘We’ve done a little bit better than we did before and therefore we deserve to get credit for that.’ If you haven’t done enough to solve the problem, or prevent the problem, then you haven’t done enough,” said Saleemul Huq, director of the Bangladesh-based International Centre for Climate Change and Development.

Beyond the summits and the public pledges, Kerry and his team at the State Department spent much of the past year exercising their diplomatic prowess.

Kerry met with his Chinese counterpart, Xie Zhenhua, more than 30 times to strike a wide-ranging deal that was announced as global climate talks sped toward a conclusion in Glasgow, Scotland (Climatewire, Nov. 11, 2021).

The U.S. and European Union led a pledge to cut emissions of methane, a short-lived but highly potent greenhouse gas, by 30 percent by 2030. They also partnered with a handful of allies on a deal to phase out coal in South Africa, Africa’s largest coal producer.

But broader geopolitical tensions limited how much the U.S. was able to achieve with countries like China and Russia, said Alden Meyer, a senior associate at the climate think tank E3G.

And while the U.S.-China agreement was meant to inject momentum into the final days of global climate talks, some saw it as little more than a symbolic gesture (Greenwire, Nov. 12, 2021).

Climate funding was perhaps the greatest disappointment to countries bearing the brunt of damages from rising temperatures. Many viewed U.S. opposition to the creation of a facility for irreparable climate impacts — what’s referred to as "loss and damage" — as a major blow, said Huq, from the International Centre for Climate Change and Development.

Speaking at a World Economic Forum event on Wednesday, Kerry said the U.S. focus was shifting.

“We’re turning our operation into an implementation plus effort," he said. "We know what we have to do coming out of Glasgow, we know what the goals are, we know how we can get there, we’re just not making the decisions to actually do all those things, and so we have to push the process as rapidly as we can."

Doing so will mean showing some humility about U.S. absenteeism on climate and how that affected vulnerable nations, said David Waskow, director of the World Resources Institute’s international climate initiative.

“Countries were very eager to have the U.S. back, there was no question,” he said. “But also, I think, they wanted the U.S. back in a way that included real recognition of the fact that the U.S. had been out and that there were these implementation challenges and that the U.S. did need to step up on something like finance in a really significant way to make up for lost time.”

The big tests ahead will be whether the U.S. can deliver on its pledge to cut emissions through some form of legislation and how it goes about making up the shortfall in climate finance and addressing loss and damage.

Both will in part hinge on what Congress can deliver.

“Getting ‘Build Back Better’ passed would be a huge jolt that would send a really powerful message to the world about the U.S.’s commitment,” said Ogden from the U.N. Foundation.

Getting countries to boost their own ambition further may be more of a challenge. Under the Glasgow pact, countries will need to return to climate talks later this year with enhanced carbon-cutting targets, something several countries are already starting to push back against.

“It’s always a balancing act when you’re setting your international targets between wanting to be ambitious but also wanting to be credible,” Ogden said.

A better focus for the U.S. and other developed nations might be helping emerging economies to pursue aggressive climate policies domestically, he said, pointing to the South Africa deal to phase out coal.

With carbon emissions on the rise, Kyte from the Fletcher School said there is a real need to help finance a green transition in other parts of the world.

Finance for loss and damage, meanwhile, will need to be removed from debates about liability and compensation, observers say (Climatewire, Nov. 19, 2021).

“It’s quite clear that this administration came out sprinting more than any other previous administration did on climate change,” said Schmidt from the Natural Resources Defense Council. “But, unfortunately, the window for action is even shorter, so that means we’ve got a lot more ahead of us.”