Biden wants solar jobs. People may not want them 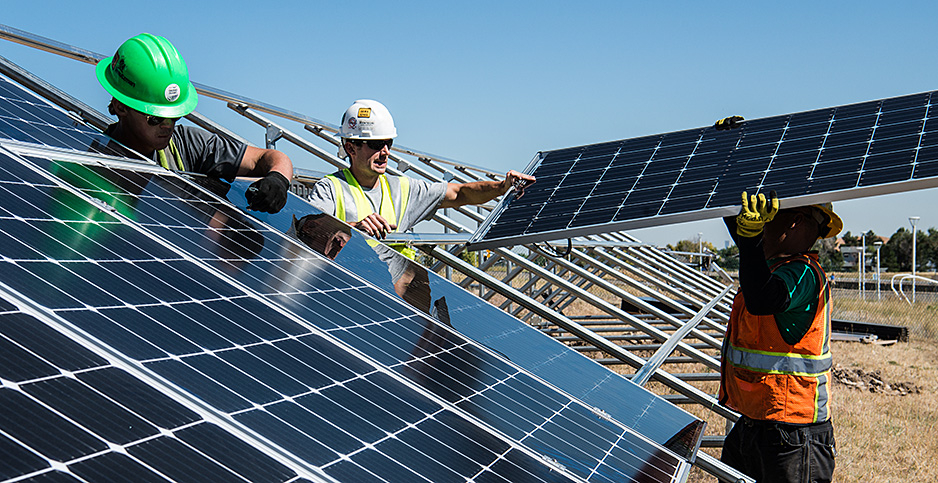 As President Biden pushes to build out clean energy, he’ll have to contend with a problem: Solar jobs are hard to fill.

It’s a curious puzzle. The solar industry’s job rolls have expanded to hundreds of thousands of workers in recent years, as demand for rooftop solar and solar farms has spiked. The jobs offer decent wages, a sense of social mission and sometimes a path to quick promotion.

But solar firms face an array of difficulties keeping themselves staffed, even in a COVID-19 economy when so many are out of work.

"It’s heavy lifting: You have to get up on ladders; you have to drive long distances. It can be exhausting work," said Andrea Luecke, who recently stepped down as executive director of the Solar Foundation, where for a decade she compiled reports on employment in the industry.

"Why would anyone want to work in the solar industry, slamming panels or digging trenches, if people can work at Starbucks?"

Such scarcity has dogged the solar field for years, but Biden’s priorities are going to put hiring managers under new pressure.

The president has embraced creating "millions and millions" of clean energy jobs as a panacea. It is a multipurpose life raft meant to stem the climate crisis, solve the jobs crisis and create paths to careers for disadvantaged communities across the country.

"We’re going to take money and invest it in clean energy jobs in America — millions of jobs in wind, solar and carbon capture," Biden said at the White House before the signing.

His call to action comes as solar, one of clean energy’s biggest job creators, is already in all-out growth mode.

The early lockdown stage of the pandemic caused widespread layoffs and furloughs. Then came the rebound. A December study by research firm Wood Mackenzie and the Solar Energy Industries Association projected the industry would post overall growth of 43% in 2020 (Energywire, Dec. 15, 2020).

Curiously, jobs have lagged even as clean energy is resurgent.

A report from BW Research Partnership, based on federal unemployment filings, found that businesses that work in the generation of clean energy, like wind and solar, added 2,800 jobs in December. But the larger context is that more than 67,000 people — 12% of that workforce — haven’t regained the jobs they lost during the pandemic.

And even with an idled workforce, solar is having a hard time finding the workers it needs.

"The labor supply is tight," the Wood Mackenzie report said. "The industry has now returned to the labor shortages experienced in late 2019 and early 2020 prior to the pandemic."

The hassle for solar employers isn’t limited to low-skill or manual positions. Service-oriented jobs, like sales and marketing, often have vacancies, and finding high-skilled workers like electricians can be nearly impossible. Those who join often don’t stick around.

One problem is that a solar job is sometimes a career cul-de-sac.

"The renewable energy industry has kind of gotten off to a bad start with the jobs being lower-quality and the jobs being almost resolutely non-union," said Lee Anderson, the director of governmental affairs for the Utility Workers Union of America, which represents utility maintenance workers.

Significantly, it is unions, strong allies of the new president, that are among the solar industry’s chief critics.

"A worker trained as a solar installer can only do one job in one industry," said Jason Walsh, the executive director of the BlueGreen Alliance, which works as a bridge between labor groups and environmental causes.

Not to be ignored are the attitudes of the workers themselves.

"We need to acknowledge that employers across the economy are finding it difficult to recruit and retain people in what I would call blue-collar jobs," Walsh said

This is a headwind for Biden’s job creation goals. Those encompass other sweaty, work-glove endeavors like rebuilding the nation’s infrastructure to make it more resilient to climate shocks.

"Over many years, we have devalued those jobs from a cultural standpoint," Walsh said, "so they’re not seen as being of value to younger generations who all want to be the next app designer."

SEIA, the national trade group for the solar industry, said it is proud that a licensed installer starts at $20 an hour, compared with the national average wage of $18 an hour.

"Our jobs are well-paying jobs across the country that put food on the table for 250,000 American families," said SEIA spokesman Dan Whitten, adding that it offers "obvious room for growth."

Leaders in the solar industry are not eager to discuss their employment difficulties. Several contacted for this story declined to comment.

One who was willing to talk was Mike Hall, the CEO of Borrego Solar Systems Inc., a San Diego, Calif.-based company that develops, builds and runs big solar and battery-storage plants.

"It’s hard. The thing is that the industry is growing," he said. Last year, despite the reverses of COVID-19, Borrego hired 88 people. This year, it expects to hire 80 more.

And finding electricians, one of the most highly trained and licensed skill sets on a solar farm? "Very difficult," he added. "Very, very difficult."

That electrician shortage "is not unique to the solar industry and is exacerbated by the current construction boom," said Whitten of SEIA.

Hall’s hassles echo those found in the Solar Census, an annual state-of-the-U.S.-industry report compiled by the Solar Foundation. Last year, as in other years, employers said there were too few applicants for jobs. Even more often, those who applied often lacked work experience or the necessary education, such as an associate’s or bachelor’s degree or a technical certificate.

More than a quarter of employers said it was "very difficult" to find talent, and 57% said it was "somewhat difficult." The hard-to-fill jobs spanned sales, marketing, electricians, construction workers and installers.

It also makes an endeavor more expensive. "We also see significant cost increases," he said, because of paying overtime and double time to the existing crew.

And Hall finds that a life bolting and wiring in the out of doors, instead of making beds or pouring espressos, isn’t for everyone.

"To have them go and work in the field in construction is not a frictionless process," he said. "There’s a change in their identity. It’s a very different job than working in a restaurant or hotel."

Undergirding the shortage is that many people never apply in the first place.

"It they understood the earnings potential, they would be more interested, because they’re good, high-paid jobs," Hall said.

The Solar Foundation, based on surveys of more than 1,800 companies, reported that salaries for entry-level solar jobs range from $16 to $20 an hour. At the high end, a senior worker or crew head with an electrician’s license could earn $37.50 per hour.

A hard job to love

Meanwhile, the solar industry has a tougher time than most industries holding on to the workers already there.

The turnover rate reported in last year’s Solar Census was 26%. That’s higher than the national average of 20%, according to a study by consulting firm Mercer.

"There’s not a lot of people who go into solar and think, ‘I can stay here for 20 years,’" said Barry Cinnamon, the owner and founder of Spice Solar, which builds rooftop solar and storage projects on homes in the Silicon Valley region of California.

One issue he pointed out is the unsteadiness of employment.

Solar projects tend to be dormant from January to April, then thrive from spring to fall when the weather is warmer, and finish the year with a crush of work as project developers rush to meet deadlines under the federal solar tax credit.

Solar farms require a huge workforce for a few months, often in a rural area, followed by a drought of work, followed by another construction site nowhere near the last one. Not every worker wants such a crazy commute.

Cinnamon said he has cultivated steady employment by making some trade-offs.

When times are fat, he avoids projects larger than his team can handle. When times are lean, in the winter, he avoids layoffs by finding something else for his people to do, like organizing the warehouse and cleaning out trucks.

"The companies that have been around a long time, that’s the way they do it," he said.

For labor advocates, the problem is one that the Biden administration could help solve by stimulating the creation of training programs.

"My argument would be, let’s boost our structures," said Walsh, the head of the BlueGreen Alliance. "Let’s invest in pre-apprenticeship programs, which exist across the country and are explicitly set up to help job seekers from disadvantaged backgrounds. Let’s make sure they are part of a clearly defined career pathway that is incented by federal policy and federal procurement."

Another, very straightforward solution exists: Pay more, though how much more is needed to lure workers is unclear.