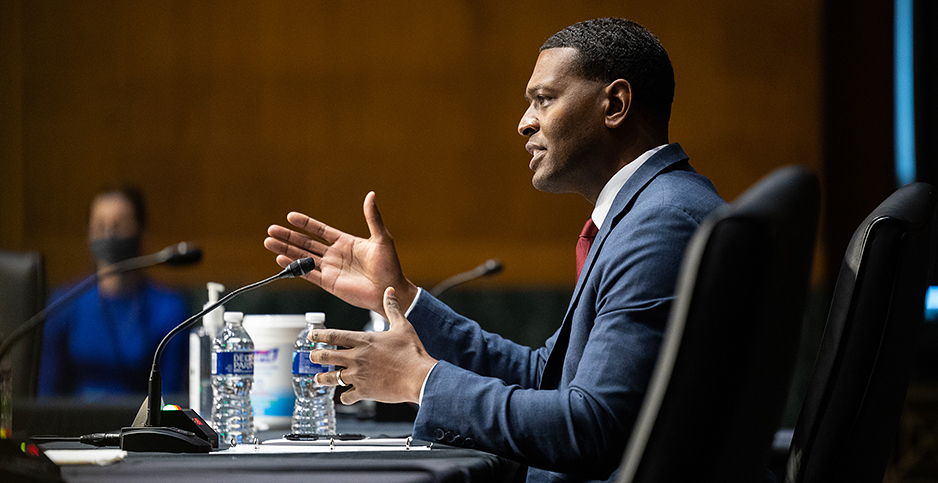 Michael Regan, Biden’s pick to lead EPA, told Capitol Hill lawmakers last week that the administration would look for its own solution to limit power plant carbon rather than reuse the one crafted by President Obama.

During his confirmation hearing Wednesday, Regan explained to the Senate Environment and Public Works Committee that EPA staff would draw lessons from the regulatory records of rules from the last two administrations before constructing their own.

"The reality is that [the lack of an existing standard] presents a significant opportunity for the Environmental Protection Agency to take a clean slate and look at how do we best move forward," Regan told the committee. "There are lots and lots of, I would say, examples of success and failure that we’ve seen in past tries."

The agency owes its clean slate to the U.S. Court of Appeals for the District of Columbia Circuit and its decision last month to strike down President Trump’s carbon dioxide rule for today’s power plants, which was finalized in 2019 (Energywire, Jan. 20).

The ruling established that the D.C. Circuit would not support the Trump EPA’s self-imposed prohibition — which it had hoped would bind future administrations — against Clean Air Act rules that shift baseload power from dirtier to cleaner technologies across the power system.

And it saved the Biden EPA team years they might otherwise have spent repealing and replacing the Trump standard, which some analyses showed might have increased cumulative greenhouse gas emissions by extending the lives of some coal-fired power plants.

"That’s why the D.C. Circuit opinion is so important," said Hana Vizcarra, a staff attorney with the Harvard Law School’s Environmental & Energy Law Program. "It gives them more time. They don’t have to focus on undoing [the Affordable Clean Energy] rule in order to start something new and fight over that. They can start fresh and really start the process of designing something new."

The victory also offers President Biden’s EPA some certainty that if they opt for a rule that goes "beyond the fence line" at an electric generating unit, the D.C. Circuit, at least, won’t throw it out.

But the Jan. 19 decision doesn’t mean such a rule would be a legal slam-dunk.

"I don’t think anyone is going to be super comforted by how the Supreme Court might view that issue as compared to the D.C. Circuit," noted John Coequyt, director of global climate policy for the Sierra Club.

The late Associate Justice Antonin Scalia wrote in a 2014 majority opinion on a related case involving EPA greenhouse gas regulation that the court would take a dim view of any agency that purports to "discover in a long-extant statute an unheralded power to regulate a significant portion of the American economy."

That was viewed as a warning shot at the then-proposed Clean Power Plan, which used a complex set of "building blocks" to encourage utilities to phase down the use of coal and ramp up natural gas and renewable power.

In 2016 the court issued a stay of the rule. That suggests the rule’s challengers stood a strong chance of succeeding, though the case was never decided on the merits.

The Clean Power Plan sought to curtail the sector’s emissions by about 32% compared with 2005 levels by 2030. Biden has pledged to zero out the sector’s contribution to climate change by 2035.

"This is a very difficult standard to sort out," said Coequyt. "People are absolutely going to expect something from the Biden administration that’s strong and that meaningfully contributes to the goals that they set in their campaign. And that is going to be hard."

Biden’s White House and EPA are filling with Obama administration alumni who were personally involved in writing the Clean Power Plan and intimately familiar with its lessons learned.

These include Gina McCarthy, the White House’s climate director who oversaw the rule’s completion as Obama’s EPA administrator; Biden’s interim Office of Air and Radiation chief Joe Goffman; and Janet McCabe, who is nominated to be Regan’s deputy.

Experts say they’re unlikely to quickly roll out the rule.

"They’re going to have to make some decisions and take some risks," Vizcarra said. "But they still have to come up with something that they think is defensible from a standpoint of will it actually fulfill their duty to create meaningful standards."

There are different ways to create a meaningful standard for power plant CO2, and many of them look significantly different from what was done under Obama. Some might even stay inside the fence line — though that’s where their resemblance to the now-defunct ACE standard may end.

Before joining Biden’s EPA transition team, Goffman told E&E News that a Biden EPA might respond to doubts about the Supreme Court with a rule that gets more emissions reductions from heightened control requirements at individual power plants (Climatewire, Oct. 2, 2020).

Coequyt said the agency could structure the rule to limit when or for how long a coal plant operates.

At Wednesday’s hearing, Sen. Sheldon Whitehouse (D-R.I.) quizzed Regan about his plans to consider carbon capture and storage in the new proposal, noting it "has moved enormously forward in the years since the original Clean Power Plan."

"As long as you’ve got people looking at that and are giving it a fair and honest look, that’s all I ask right now," Whitehouse told him.

Jeff Holmstead, who led the Office of Air and Radiation during the George W. Bush administration, said a market-based approach to greenhouse gas regulation — while still risky from a legal perspective — might stand a better chance in the courts than the Clean Power Plan’s "building block" approach.

"If you think the D.C. Circuit’s decision is the last word on the legal issues, I think they ought to just go ahead and do a cap-and-trade program," said Holmstead, who is a partner at Bracewell LLP. He noted the agency under Obama used a trading program to regulate smog that travels across state lines.

"I still think the Supreme Court is going to be very skeptical of anything like that," he said, referring to any rule that strayed beyond a power plant’s fence line. "Their view is that this is an issue of significant economic and political importance, and I think that their view is that under our constitutional system those decisions need to be made by Congress."

Holmstead said Senate Republicans might back a clean energy standard if the industry got behind it.

But Vizcarra said EPA’s task would be made easier by the fact that the Biden administration was planning a whole-of-government approach to climate change.

While the Clean Air Act rule still would be the primary way that power plant carbon is regulated, she said its objectives would be supported by efforts at other agencies that would shift the balance in favor of cleaner technologies. These might include utility regulations, financial sector disclosure requirements or new incentive programs.

"While those are not direct emissions regulations, those will influence the development of our power sector," she said.