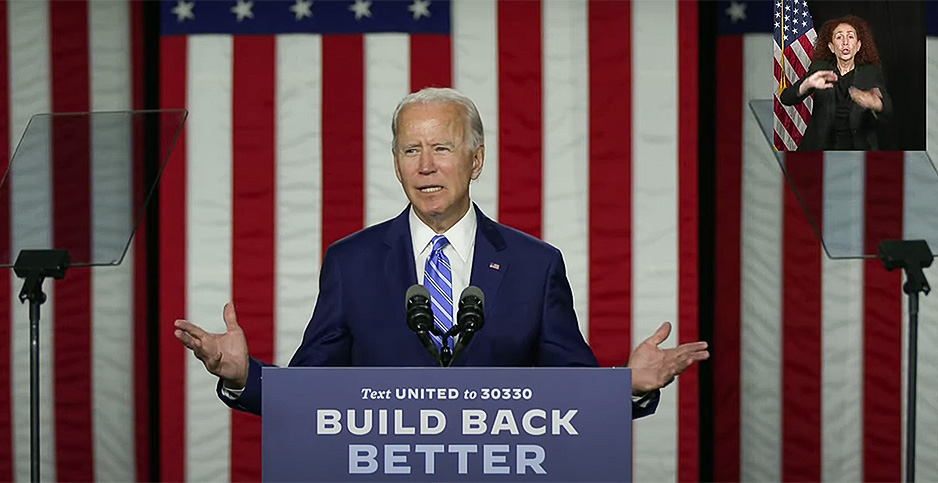 If Democrat Joe Biden wants to scrap the Trump administration’s definition of which waters qualify for federal protection, experts say he’ll face a heavy legal lift, lengthy rulemaking, and an onslaught of opposition from industry, ranching and agricultural interests.

Yet sources say the Waters of the U.S., or WOTUS, rule, which has riled both conservatives and environmentalists, could be a top priority should the former vice president win the White House in November — right after reinstating President Obama’s Clean Power Plan and reining in President Trump’s revisions to a rule for National Environmental Policy Act compliance.

"I think there’s going to be considerable pressure to deal with the Waters of the U.S. mess," said Vermont Law School professor Pat Parenteau, referring to the regulation that defines the scope of the Clean Water Act. "I think what he really has to do is what Trump did, in reverse, and flip the script."

The Trump administration’s Navigable Waters Protection Rule took effect in June, pulling back federal protection for millions of miles of streams and acres of wetlands.

Experts say it would take considerable legal footwork and savvy to replace that rule, especially given that the Supreme Court is expected to eventually address the reach of the Clean Water Act.

The Biden camp would face the same dilemma that has flummoxed other administrations: how to craft a WOTUS rule that will survive legal challenges.

That could put the spotlight on Chief Justice John Roberts, an appointee of President George W. Bush. During the court’s last term, Roberts guided the justices away from massive regulatory swings in environmental cases (Greenwire, July 13).

"I think [Biden is] going to have to figure out a new line that he can draw on federal jurisdiction that will survive Supreme Court review, and that comes down to Roberts," Parenteau said.

Larry Liebesman, a former Justice Department attorney who now serves as senior adviser for consulting firm Dawson & Associates, agreed that the fate of any new WOTUS rule could hinge on the Supreme Court and its makeup.

"At the end of the day, this is going to end up back in the lap of the Supreme Court," Liebesman said. "And, as we’ve seen at times, Roberts has been inclined to vote against the Trump administration, so you can’t really put him strictly in the conservative camp."

Mark Ryan, a former Clean Water Act attorney for EPA’s Region 10 office, warned that repealing the Trump rule and crafting a substitute is almost certain to draw legal assaults, and that a Biden administration would need to move forward carefully.

"Everyone seems to think, ‘Oh, we can just undo all this Trump stuff.’ It’s going to be a long haul," Ryan added. "One lesson to take away from the Trump efforts is they went too fast and they created low-hanging fruit for people to sue them over because they were so sloppy."

The demise of Trump’s WOTUS rule could play out in the courts or the halls of Congress.

Should Democrats sweep both chambers and the White House, Congress could amend the Clean Water Act to define the reach of the waters of the United States, said Betsy Southerland, a former career official in EPA’s Office of Water. Then the EPA and Army Corps of Engineers could write implementing guidance, she said.

"I would suggest this is the real fix," said Southerland.

A second option would be for a Biden administration to repeal Trump’s WOTUS rule and return to 2008 guidance that was in place before the Obama administration’s rule was stayed. Under that scenario, Southerland said, Biden’s administration would stop defending Trump’s rule in court, where more than a dozen lawsuits have piled up (Greenwire, June 24).

The Biden camp would then likely see legal challenges from red states, as well as energy and agricultural industries, which have embraced the Trump rule. The Biden administration could argue that Trump’s rule is not based on science and doesn’t account for protecting critical waters — the subject of a recent article in Science — and relies too heavily on former Supreme Court Justice Antonin Scalia’s opinion in Rapanos v. United States, said Southerland.

"There’s a lot of litigation, concurrent litigation in multiple courts across the country," Ryan said. "What will happen is the Department of Justice will just stop defending those cases, at least the repeal rule and the 2020 rule, which means the industry will likely step in and continue to litigate."

Yet a third option — and the most difficult, legally — would be for the Biden administration to repeal the Trump rule while simultaneously crafting a substitute, said Southerland.

Parenteau also suggested Biden could direct DOJ to ask the courts to vacate the Trump WOTUS rule to "take it off the books" and remand it to his administration for a rulemaking.

"Then the question is, do you go just go back to the Obama rule, or do you come up with a new rule?" Parenteau said.

Whatever route Biden takes in writing a new rule, legal experts say, he would be wise to keep the Supreme Court — and Roberts’ voting record, in particular — in mind.

"As we’re all doing these days, I think you’re playing for Roberts in these close environmental cases," Parenteau said. "I don’t see you getting [Neil] Gorsuch or [Brett] Kavanaugh, and certainly not [Samuel] Alito or [Clarence] Thomas. Kavanaugh is a Scalia clone, so we know where he’s going to go, and Gorsuch, he’s a Westerner, and he’s probably leery of broad federal jurisdiction."

One guidepost, legal experts said, is Roberts’ concurring opinion in the Supreme Court’s split 4-1-4 decision on Rapanos, a case brought by a Michigan landowner who was blocked from developing a property that had been designated a wetland (Greenwire, March 7, 2017).

Scalia wrote the plurality opinion in that case, earning the votes of three other justices, including Roberts. Scalia said only waterways and wetlands with "relatively permanent" surface water connections to larger waterways should be regulated under the Clean Water Act.

That opinion would ultimately be the basis for the Trump administration’s narrower WOTUS rewrite.

But former Justice Anthony Kennedy wrote separately, stating that waters must have a "significant nexus" to navigable rivers and streams, including through biological or chemical connections. In contrast, that broader definition was adopted by the Obama administration, and by most federal courts.

Ryan pointed out that Roberts penned his own opinion in the case in which he would have given EPA deference had it promulgated a rule — and that could extend to a Biden administration.

"His concurring opinion in Rapanos indicates he’d be amendable to deferring to EPA’s interpretation of the Clean Water Act if the agency promulgated a rule," he said.

Liebesman said Roberts’ position also shows why the Biden administration wouldn’t want to hew too closely to Obama’s rule. "Given that Justice Roberts sided with Justice Scalia in Rapanos and his comments in cases since then, going back to the Obama rule may not be successful in the Supreme Court," said Liebesman.

Roberts may be swayed by a rule that’s not as broad as Obama’s and not based on science alone, Parenteau said.

"I don’t know that Roberts is particularly swayed by science. … He’s a traditionalist and a conservative and strict constructionist except when he’s persuaded that an overly strict interpretation of a statute really does violence to the basic purpose of a statute," said Parenteau.

To avoid never-ending legal wrangling, Southerland said she’s holding out hope that a Democratic Congress will clarify which waters are subject to the Clean Water Act, a definition not touched since 1972.

"For such a fundamental issue to be unresolved 50 years later is an outrage," she said, "and a rulemaking is always going to be subject to litigation."