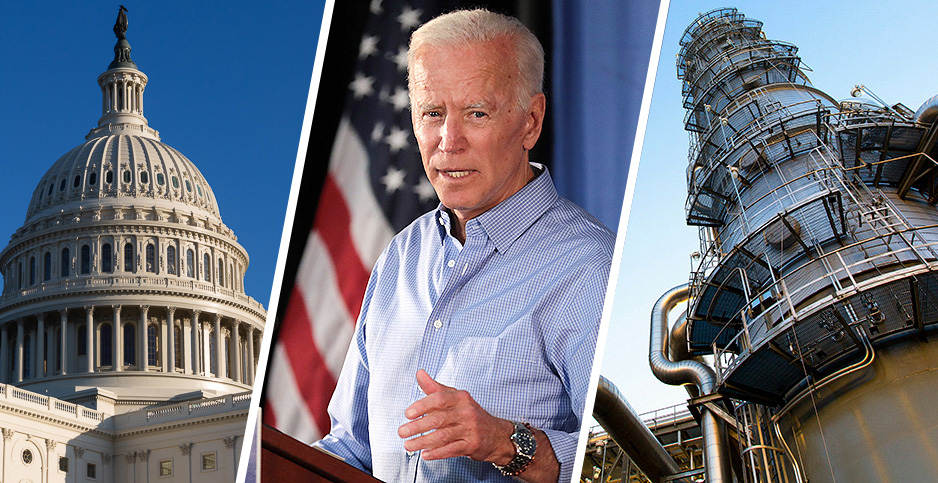 Advocates of carbon capture and sequestration technology see an ally in the next White House and in Congress — though a divided Congress could pose challenges for President-elect Joe Biden's broader clean energy goals Francis Chung/E&E News(capitol); Gage Skidmore/Flickr(Biden); NRG(Petra Nova)

President-elect Joe Biden’s plan to reach 100% clean electricity in 15 years may hinge on a technology that has been deployed at few power plants and faced financing challenges.

Currently, carbon capture and sequestration (CCS) technology remains the chief solution to removing carbon dioxide emissions in the next decade from natural gas and coal, which are projected to be central parts of the power mix through 2035. That raises questions what Biden could do to move the needle on the ground, particularly with a potentially divided Congress.

But advocates say CCS may be one of the few energy issues where Democrats and Republicans could find agreement, considering the history of climate hawks like Sen. Sheldon Whitehouse (D-R.I.) and coal state Republicans like Sen. Shelley Moore Capito of West Virginia joining together in the past to advance CCS legislation.

"The sorts of policies that are required to make carbon capture more mainstream … and a commercially available technology, appeal to both moderate Democrats and moderate Republicans and that’s the core set of votes that are needed," said Sasha Mackler, director of the energy project at the Bipartisan Policy Center. "It feels like we’re set up for a pretty strong carbon capture agenda in the next Congress."

CCS also gives Biden some common ground with legislators from coal-heavy states that he lost in the 2020 presidential election, Mackler said.

In his climate and energy plan, Biden called for accelerating carbon capture, stating he would "double down on federal investments and enhance tax incentives for the technology. He said he shares the goals of the Carbon Capture Coalition, which sent a letter yesterday to members of Congress on priorities. The coalition consists of environmental groups, labor unions, coal and oil companies, and other CCS advocates.

For carbon capture advocates, one of the highest priorities would require congressional approval — an extension of 45Q, which gives a tax credit per metric ton of carbon dioxide captured and stored. Currently, those looking to claim the credit must start project construction by the end of 2023, which proponents say isn’t enough time given past delays on guidance for the incentive (Energywire, June 1).

"Republicans have, of course, shown support for CCS by substantially amending the Section 45Q CCS tax credit during a period of a Republican-controlled White House and Senate," said Amish Shah, a partner at Eversheds Sutherland LLP, which has a range of energy clients. "Similar Democratic support stems from an appreciation of the tremendous environmental benefits of CCS projects in the United States, and globally, to combat climate change."

Yet it has taken years for carbon capture legislation to move through Congress in the past, and there’s no guarantee Biden’s administration would be any different. He also could face pressure from members of his left flank who don’t support CCS or technologies that may keep fossil fuels viable longer.

Others like Brett Hartl, government affairs director at the Center for Biological Diversity, said more details are still needed about Biden’s plans for carbon capture.

Hartl, referencing a September letter to Congress from a host of environmental groups, said there’s tension between advancing carbon capture, particularly for the power sector, and the need to address environmental justice issues.

"If Joe Biden wants to live up to his promises on both environmental justice and the climate crisis, he needs to avoid supporting false solutions and focus on the jobs of the future in clean and renewable energy," added David Turnbull, strategic communications director at Oil Change U.S.

While Congress would need to pass legislation to extend 45Q tax credits that support carbon storage projects, Biden could support carbon capture in other ways.

Julio Friedmann, a senior research scholar at the Center on Global Energy Policy at Columbia University, said he expects to see increased funding for demonstration projects in the budget at the Energy Department — not just for carbon capture, but also for novel solar technologies and advanced nuclear reactors, among other things.

In addition to DOE, Friedmann said EPA under Biden could increase staffing at the Office of Water, particularly around the permitting of wells used to inject CO2 into deep rock formations for geologic sequestration. That type of CO2 injection well is known as a Class VI well.

"Over the last four years they have lost key personnel who would help facilitate that permitting and oversight," Friedmann said, adding, "It would be my expectation that the EPA budget would include a bit more for that staff." Friedmann said that would likely be part of a broader effort to rebuild the agency.

Erin Burns, director of policy at Carbon180, a climate-focused nongovernmental organization, also said more support is needed at EPA for the Class VI well program, as well as "an emphasis on the regulatory and infrastructure system that you’re going to need to see large-scale deployment of carbon capture."

Burns said while there’s a lot of value in the federal government thinking about the deployment of large-scale projects, there should be a greater discussion of putting underlying infrastructure in place and making sure there’s a "robust," well-funded regulatory system.

"I’m hoping that we’ll see the Biden administration lean on not just the carbon capture [research and development] side, but also on the regulatory and infrastructure side," Burns said.

Friedmann, as he noted in a September report, also underscored the importance of building more CO2 pipelines in the United States and said he’ll be watching to see if that kind of infrastructure, among other types, will be listed in Biden’s budget.

"You need the infrastructure to get the deployment," Friedmann said. "There’s lots of different policies that could be proposed for such a thing. We’ll see whether or not that appears in the budget or if there are other policy ideas behind it."

In a post last month, however, the Institute for Energy Research noted the country’s lack of CO2 pipeline infrastructure and claimed most industrial and power plants will not be able to economically retrofit with carbon capture and sequestration technology given the current tax credit.

IER said to achieve his climate goals, Biden will have to replace "most of the current fossil fuel technology with renewable energy," which the group called an "enormous transition." IER is led by Tom Pyle, who steered Trump’s Energy Department transition team.

During the Obama administration, the CCS industry came under fire after government money funded large demonstration projects like FutureGen 2.0 that later were canceled. CCS supporters said much was learned from those projects, but critics called it a money hole.

Others have also questioned whether low oil prices — if they linger — would stall CCS projects, since many in the past have been tied to enhanced oil recovery (EOR) operations.

In a September report, the International Energy Agency said "an extended period of low oil prices and demand would undoubtedly undermine planned investment in CCUS projects linked to EOR."

It noted that CO2 for EOR "may be more resilient" in the United States compared to other regions where that particular use is still limited, however.

In the U.S., "capture projects may opt for dedicated geological storage, which attracts a higher tax credit, as a more financially attractive and stable alternative, especially if oil prices remain low for a long time," the report said.

Brad Crabtree, director of the Carbon Capture Coalition, told E&E News this spring that the price of oil has no impact on saline storage projects, and carbon capture projects that rely on storage through enhanced oil recovery are affected less by low prices than "overall market confidence" and the state of tax equity markets (Energywire, March 25).

Kurt Waltzer, managing director at the Clean Air Task Force, said Biden will need to build on the Obama administration’s approach to reach its climate targets.

"We need additional demonstrations for carbon capture on cement, steel and gas power plants, and we also need support for large storage sites, pipelines, and deployment," Waltzer said in an email.

In addition to policies like tax credit enhancements, he said the Biden administration could adopt new source performance standards that "reference the feasibility of carbon capture on power and industrial sources."

"The Biden administration cannot only reimplement those, but they can implement them … with even stronger limits," Waltzer said.

As for low oil prices, Waltzer said one consequence is that developers are becoming more interested in saline storage and said the overall economic downturn, as a result of COVID-19, has made it harder to finance projects based on tax credits. That’s one reason why Congress is considering a direct pay option, he said.

While carbon capture is often discussed in the context of the power sector, advocates say to address climate change, it is critical to look beyond the 100% clean electricity concept and decarbonize the industrial sector, particularly for industries like cement, steel and aluminum.

"Right now, there are no other ways to limit their emissions other than some form of carbon capture," said Paul Bledsoe, a strategic adviser at the Progressive Policy Institute and a former Clinton climate adviser. "So this is not just about electricity."

On the power sector side, Bledsoe said natural gas power plants could be retrofitted with carbon capture technology, which he noted would involve subsidies.

"All new energy technologies require subsidies to break into the market," said Bledsoe, who also sits on the executive committee of Clean Energy for Biden.

He added it isn’t yet known whether or not CCS costs will come down rapidly enough for wide deployment, but "we need to find out — because otherwise we’re going to have to find another way to get to net-zero."

The same September report from the International Energy Agency said carbon capture involves "the only group of technologies that contributes both to reducing emissions in key sectors directly and to removing CO2 to balance emissions that cannot be avoided — a critical part of ‘net’ zero goals."