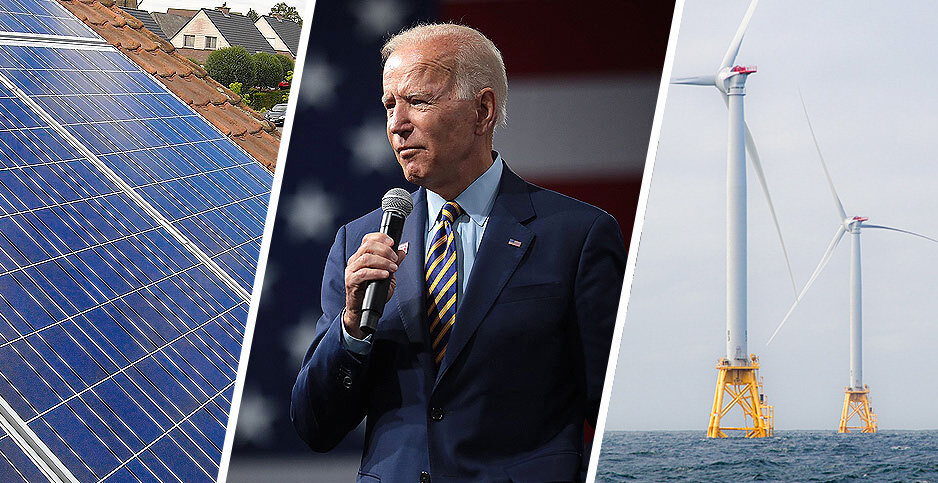 President Biden will unveil a $2 trillion, eight-year plan today that features efforts to speed up a transition to clean energy, including $100 billion to upgrade the U.S. electric grid and to give the Energy Department more clout in disputes over siting power lines.

The sweeping "American Jobs Plan," which Biden will begin pitching at an event this afternoon in energy-rich Pennsylvania, also calls for huge investments in carbon capture projects, $174 billion in electric vehicles, and the repeal of subsidies and foreign tax credits for the fossil fuel industry.

Citing the recent Texas power outages, White House officials said yesterday that the electric grid "needs urgent modernization" and that Biden’s plans would not only lead to a more resilient grid, lower energy bills and new jobs, but also put the U.S. "on the path to achieving 100 percent carbon-free electricity by 2035."

The package includes a targeted investment tax credit to incentivize the build-out of at least 20 gigawatts of high-voltage power lines needed to unlock more renewable energy generation, according to a summary shared with reporters yesterday. It would also establish a new Grid Deployment Authority at DOE that would allow the agency to better leverage existing rights of way along roads and railways and would support "creative financing tools" to encourage additional high-priority transmission lines.

The White House said the plan would also mobilize private investment in upgrading the power sector, along with supporting state, local and tribal governments that choose to improve the grid through clean energy block grants.

The entire infrastructure plan — which incorporates an overhaul of the transportation sector, improved roads and bridges, and calls for more energy efficient and affordable housing, among other measures — faces a tough road in Congress, where Republicans have balked at spending additional money.

But a White House official told reporters on a call last night that the plan will create "millions and millions" of jobs and position the U.S. to out-compete China and tackle the "escalating economic cost" of climate change.

"We think there is a compelling economic rationale for moving forward," the official said of Republican pushback.

Biden is also pledging to establish an Energy Efficiency and Clean Electricity Standard, which would require utilities and grid operators to improve energy efficiency and promote carbon-pollution-free energy supplied by existing sources like nuclear and hydropower.

The plan also calls for plugging so-called orphan oil and gas wells and cleaning up abandoned mines — a provision that could attract support from coal state lawmakers, including Sen. Joe Manchin (D-W.Va.), who chairs the Senate Energy and Natural Resources Committee.

Biden has sought to address racial and social inequities in energy development and his plan calls for building "next generation industries" in disadvantaged communities as it continues his administration’s embrace of projects to capture carbon from fossil fuel-burning plants.

His plan would seek to establish 10 facilities to demonstrate carbon capture retrofits for large steel, cement and chemical production facilities — widely seen as some of the toughest sectors to decarbonize. It would also reform and expand the so-called 45Q carbon capture tax credit to make it easier to use for industrial applications, direct air capture and retrofits of existing power plants.

Biden is also asking for $35 billion for climate research and development, including launching the Advanced Research Projects Agency-Climate to develop new methods for reducing emissions and building climate resilience.

Some observers, including the American Action Forum, a center-right policy institute, have warned that the agency would "simply duplicate the efforts of current government agencies," pointing to DOE’s Advanced Research Projects Agency-Energy.

And Biden will call for $46 billion to help the federal government jump-start clean energy manufacturing through federal procurement. The White House noted that to meet Biden’s goal of achieving net-zero emissions by 2050, the U.S. will need more electric vehicles, charging ports, and electric heat pumps for residential heating and commercial buildings.

The plan comes as an array of clean energy advocates have lobbied the White House and Congress for various provisions, hoping to be included in what could be Biden and congressional Democrats’ best opportunity to invest in clean energy.

The clean energy proposals fall short of the $1 trillion in spending over the next 10 years that several activists and liberal Democrats have said is needed to address climate change and environmental justice.

But some advocates said the targeted spending will spur more innovation. The Information Technology and Innovation Foundation, a science and technology policy think tank, noted the administration is proposing a major increase in federal support for clean energy research and development in the private sector, along with universities and federal laboratories.

"The investments that the administration is proposing will generate momentum toward producing the climate solutions we need, scaling them up to meet the global challenge, and capturing significant economic benefits for the nation," said senior fellow David Hart, director of ITIF’s clean energy innovation program.

Heather Zichal, CEO of the American Clean Power Association, noted that although there has been a sea change over the past decade in how Congress talks about climate change policy, compromise hasn’t gotten any easier.

"Republicans will want to see everything paid for, and some pay-fors will be easier than others," she said.

The White House said Biden will propose raising the corporate tax rate to 28% to pay for the package. He will also propose eliminating tax preferences for fossil fuels and restore payments from polluters into the Superfund Trust Fund.

"I’d love to do an infrastructure bill," McConnell said at an event in Kentucky, adding, "I’m not interested in raising taxes across the board on America. I think it will send our economy in the wrong direction."

"There’s a lot of conversation on the Hill and in the administration about, how do we think about the infrastructure agenda in the most labor-friendly manner and what does that look like?" she said. "Which for many is great, but can lead you into some challenging conversations, trying to keep coalitions together."

The Solar Energy Industries Association warned that Biden’s plan needs to be big and bold.

"In order to reach 100% clean electricity by 2035 as the president aims to do, and strengthen America’s infrastructure, business as usual will not suffice," said Abigail Ross Hopper, SEIA president and CEO. "On our current trajectory, the solar industry is going to need to install an extra 150 gigawatts of generating capacity above projections, which is 50% more solar than we have installed in the entire history of the solar industry."

Some legislators from oil-rich states see cleaning up such sites as a way to create jobs, with New Mexico’s congressional delegation calling last year for orphan well funding in a future stimulus (E&E Daily, June 2, 2020).

Tim Tarpley, senior vice president of government affairs at the Energy Workforce & Technology Council, which represents oil field service companies, said the association worked with former Rep. Xochitl Torres Small (D-N.M.) on a bill to plug and remediate orphaned oil and gas wells, though it was not introduced. A version similar to that legislation may be introduced soon, he said.

"That’s obviously a good thing for the industry, it’s a good thing for the environment," Tarpley said of proposals to plug orphan wells. "Our only hope is… it’s just a clean bill, in that it’s setting up the program without a whole bunch of other extraneous provisions in there."

She said Republicans are likely to raise concerns over the price tag, noting that Biden will propose ways to pay for the plan: "I’m still hopeful that people see the importance of the need to both pay for [clean energy] and to invest in it in order to keep our country on track and competitive internationally."

Biden pledged during the 2020 campaign to zero out power grid carbon emissions by 2035 and fully decarbonize the U.S. economy by 2050. While those deadlines are far off, several extensive computer analyses of low-carbon strategies say clean energy investments must ramp up immediately to historic peak levels and grow from there to meet his targets.

A report by Princeton University analysts in December forecast that wind and solar — now providing about 10% of U.S. electricity — would have to leap fourfold by 2030, supplying about half of U.S. electricity, to get on course to hit Biden’s carbon goal for midcentury.

Transmission capacity would have to increase by 60% by the end of this decade, with an investment of $360 billion. By 2030, roughly 50 million electric vehicles would have to be on the road, and more than 3 million public charging stations would be required to stay on paths like those Biden has targeted, the Princeton analysts said.

The White House said Biden’s infrastructure plan will call for the U.S. "to win the EV" market, including grant and incentive programs for state and local governments and the private sector to build a national network of 500,000 EV chargers by 2030 and electrifying at least 20% of the United States’ yellow school buses.

As a run-up to Biden’s announcement, clean energy advocates have called on the Tennessee Valley Authority, the nation’s largest public power utility, to decarbonize by 2030.

TVA is an independent federal agency and could play a significant role in advancing Biden’s clean energy agenda.

"We’re hoping that as an extension of the administration, that the board and TVA is tasked to move forward in a way that provides leadership," said Stephen Smith, executive director of the Southern Alliance for Clean Energy.

TVA has a goal to cut carbon emissions 80% from 2005 levels by 2035. CEO Jeff Lyash has echoed statements from executives from investor-owned utilities in saying that new technologies are needed to get to 100% decarbonization. This includes next-generation nuclear, carbon capture technologies and battery storage.

SACE highlighted a February report from the progressive group Evergreen Action and think tank Data for Progress that called for a federal clean energy standard — one that sets specific targets for electricity sales — as the best way to fully decarbonize the power sector.

"I do not see another mechanism other than a clean energy standard very similar to what Evergreen Action has articulated to be able to get us to what the president has committed in his campaign promises," Smith said.

He said a combination of innovation and incentives will play a key role in carrying out Biden’s plan.