Biden’s $6T plan a ‘whole of government’ approach on climate 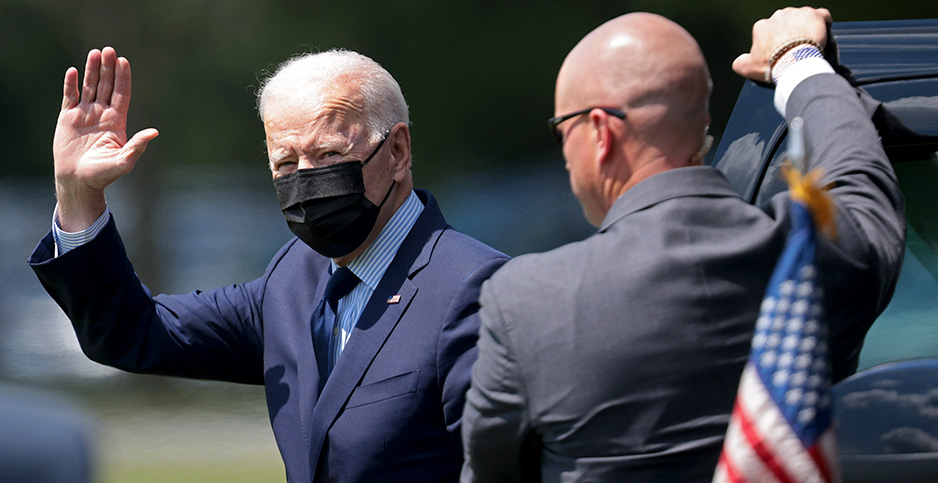 President Biden today detailed a $6 trillion fiscal 2022 budget that prioritizes climate change, clean energy and infrastructure investments, an opening salvo in a likely lengthy battle with Congress to get his ambitious spending and policy goals enacted.

"The budget includes major new climate change investments — an increase of more than $14 billion compared to 2021 — across nearly every agency," the White House said in documents that describe a "whole of government" approach for spending a total of $36 billion in the coming fiscal year to help put the nation on a pathway to achieving net-zero emissions by 2050.

The climate focus is unprecedented in the nation’s history and is likely to please progressives and environmental groups that were outraged over cuts to those efforts during the Trump years.

The Biden budget also could find some support from Republicans who are increasingly supportive of clean energy investments, although plans to raise taxes for fossil fuel companies will face heat from the GOP.

Earlier this spring, the administration laid out broad budget goals that would boost discretionary spending to $1.52 trillion for fiscal 2022. That would be a $118 billion — 8.8% — increase over current funding.

"The country has been weakened by a decade of disinvestment in these areas, which were squeezed under restricted budget caps," Young said. "The discretionary request issued a clear call to Congress to reinvest in these areas restoring nondefense appropriations to its historical averages."

The plan includes nearly 30 mentions of "environmental justice" — an issue that Biden has elevated across government.

Young told reporters today there is no breakout line for "racial equity" because the White House has directed all agencies to "use that lens as they implement these programs."

Other budget highlights are:

It proposes $110 million for a new Thriving Communities initiative, which aims to boost transportation equity by providing capacity building grants to underserved communities.

The plan has $600 million for electric vehicles and charging stations in the individual budgets of 18 federal agencies, including the U.S. Postal Service.

"The American Jobs Plan will invest in America in a way we have not invested since we built the interstate highways and won the Space Race," states the budget.

"But unlike past major investments, the plan also prioritizes addressing long-standing and persistent racial injustice and helps ensure rural, urban, and Tribal communities have a fair shot at prosperity," it says.

The fiscal 2022 budget would sprinkle billions of dollars across the government in support of the American Jobs Plan, including clean energy programs, boosting climate resiliency, water projects and environmental justice.

"This year’s budget gives a full accounting of the first, critical steps our nation must take to begin the work of building back better," it states.

The plan would keep near-term deficits at around $1 trillion. The budget outlines changes in the tax code that would help raise revenue by ending breaks for fossil fuel companies, while backing several clean energy tax credit expansions aimed at promoting renewables.

The White House promises to save $35 billion over the next decade by ending fossil fuel tax preferences. The largest savings would come by repealing both the intangible expensing of drilling costs and the percentage depletion for oil and gas wells.

The tax proposal outlines about $307 billion in clean and alternative energy tax breaks over the next decade by expanding, enhancing or restoring various code preferences.

Among the largest are $210 million for extending and expanding the energy investment tax credit and $14 billion for various tax incentives aimed at energy efficiency and expanded electrification.

Capitol Hill is eager to move ahead on its annual appropriations work, which will face a time crunch this year with the budget arriving months late.

It is already widely expected that Congress will need to pass a stopgap funding resolution to avoid a government shutdown when the new fiscal year begins on Oct. 1, with few of the fiscal 2022 spending bills likely to be enacted by then.

House appropriators are expected to begin marking up their spending bills in June with a goal of having them off the floor by the August recess.

Senate plans are less certain, and it is not clear how many appropriations bills, if any, will make it out of committee and onto the floor given the 50-50 split in the chamber.

The likely outcome is this year’s spending legislation will be cobbled together behind closed doors into a single omnibus that Congress will consider late in the year, a trend that has become common over the past decade.

"When was the last time a president’s budget got much of a landing here?" asked Whitehouse. "My focus is much more on the bills," like infrastructure proposals.