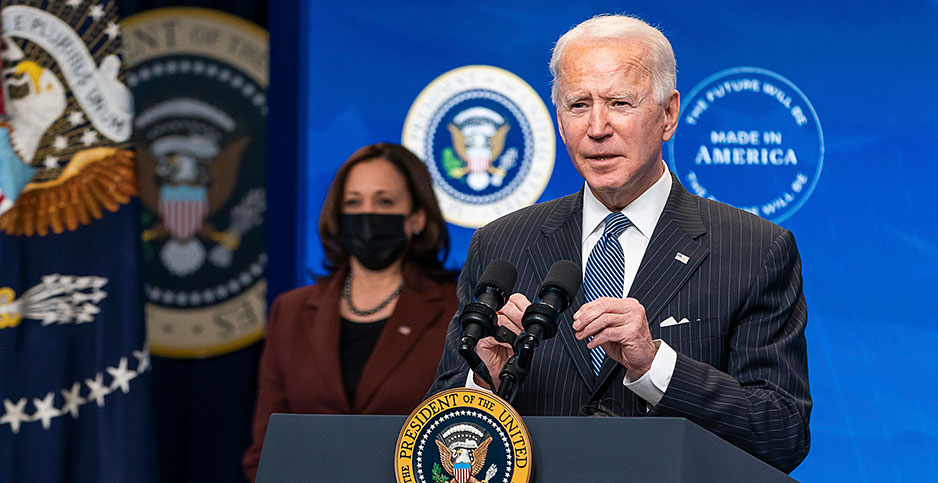 President Biden has pledged to make the United States a leader in clean energy manufacturing as part of his efforts to jump-start the economy and create "millions" of green jobs.

But when it comes to boosting U.S. production of solar parts and modules — key technologies in Biden’s plans to zero out electricity-sector carbon emissions — the administration faces an uphill battle.

Asia has maintained its status as the dominant solar manufacturing hub despite steep tariffs imposed by the Trump administration. What’s more, critics have said protectionist U.S. trade policies such as tariffs have backfired, hampering domestic solar deployment and increasing costs.

"This is the sector that is most clearly dominated at the moment by Chinese players," said Ethan Zindler, head of Americas at BloombergNEF, during a webinar Thursday on clean energy supply chains hosted by the Center for Strategic and International Studies.

Solar advocates say there’s good reason for the Biden administration to be interested in manufacturing: Producing more solar parts domestically could ease the transition to 100% carbon-free electricity by 2035, a campaign pledge of Biden’s that will require a massive build-out of renewable energy.

In addition, shipping solar parts and materials around the world contributes to greenhouse gas emissions, said Desari Strader, president and founder of Violet Power, a company that last year announced its intention to create an integrated solar manufacturing supply chain in the United States.

"If you truly care about climate change, you put your energy source near your supply chain and feedstock," Strader said.

Industry leaders say they see signs that Biden is serious about addressing the issue.

Biden has signed an executive order aimed at strengthening the Buy American Act, which instructs the federal government to give preference to domestic manufacturers when procuring goods and services. The order closed loopholes in the BAA that allowed some companies doing business overseas to benefit from the policy and bolstered enforcement tools to ensure that the government works with firms that employ people in the United States, according to the White House.

"This order is deeply intertwined with the President’s commitment to invest in American manufacturing, including clean energy and critical supply chains, grow good-paying, union jobs, and advance racial equity," the White House said in a statement.

While executive action alone may not be enough to expand domestic manufacturing of solar panels, industry leaders have welcomed Biden’s order.

"It sends a signal to the market that the federal government wants to buy a lot of solar panels, and they want them made in America," said Bob Keefe, executive director of E2, a business group that advocates for clean energy jobs. "Somebody is going to figure out how to do that. It’s as simple as that."

Many analysts say Biden’s procurement strategy has added significance because the federal government is the nation’s largest energy consumer, and some of the president’s other clean energy moves could be limited by Congress (Energywire, Feb. 10).

Solar panels could be installed at federal facilities across the country run by the Department of Defense and other agencies, said Minh Le, who directed the SunShot Initiative at the Department of Energy’s Solar Energy Technologies Office under former President Obama.

Additional policies will be needed to make the United States a leader in solar manufacturing, but focusing on BAA is a good start, Le said.

"I believe the Biden administration will follow up that policy position with a number of incentive programs that will support domestic manufacturing, and look at it beyond a simple, ‘I’m going to support one segment of the industry,’ but think about the entire value chain," Le said.

But critics of Biden’s approach say his policies mirror former President Trump’s and would increase costs.

After Biden signed the BAA order, the Bloomberg editorial board wrote that the new rules would force the government to buy more expensive products.

"If that happens, it’s taxpayers and users of public services who’ll suffer the consequences," it said.

In 2019, there were fewer than 35,000 American jobs in solar manufacturing, compared with roughly 162,000 in installation, according to the Solar Foundation’s national solar jobs census.

The same year, three-fourths of solar installers nationwide obtained modules produced outside the country, the census said. To the extent that domestic module production did occur in 2019, almost all solar cells used to make the modules were imported, according to the census.

In some cases, companies that have tried to manufacture solar modules or cells domestically haven’t been able to stick it out in the face of foreign competition.

Last September, the only facility in the United States that made solar cells ceased operations, said Xiaojing Sun, a senior research analyst at Wood Mackenzie. Panasonic Corp., which operated the solar "Gigafactory" with Tesla Inc. in Buffalo, N.Y., stopped its production at the factory as part of the electronics giant’s strategy to streamline global solar operations, the company said at the time.

China, which produces most of the world’s solar cells and polysilicon used in panels, supports solar manufacturing through direct subsidies and other policies that aren’t the norm in the United States, Sun said. That makes it difficult for U.S. manufacturers to compete, she added.

"Manufacturers themselves [in the United States] get less support from all levels of government," Sun said.

With China facing allegations of human rights abuses against as many as 1 million Uyghurs, a minority population of mostly Muslims in the country’s northwest Xinjiang region, reducing the solar industry’s reliance on foreign supply chains is also a moral necessity, according to some in the industry (Energywire, Oct. 26, 2020).

Bringing manufacturing "back" to the United States has long been a politically popular idea. In 2012, Obama pledged during his reelection campaign to create 1 million new manufacturing jobs. Trump made similar promises in 2016.

Yet the United States has lost nearly 5 million manufacturing jobs overall since 1997, according to the nonpartisan Economic Policy Institute.

For Biden’s manufacturing push to be effective for solar and beyond, the administration must think about supply chains holistically, according to analysts and industry representatives. That means incentivizing and supporting production of not just panels but the materials that go into them, including glass, aluminum, steel and polysilicon, or at least finding ways to make those materials cheap and readily available.

"There are a lot of buzzwords about manufacturing job creation, but part of the challenge is manufacturing requires not just the manufacturing jobs for the facility, but for many other facets of the supply chain," said Andy Klump, CEO of Clean Energy Associates, a solar and battery advisory firm.

Biden would need to implement both demand-side and supply-side policies to move the needle on this issue, according to analysts. Those could include tax incentives and credits coupled with specific and sustained strategies to decarbonize the power sector, said Logan Goldie-Scot, head of clean power at BloombergNEF.

"If companies are trying to build a best-in-class manufacturing facility, they’re looking for an indication that this won’t be a two- or three-year boom and then the market will disappear, but that it will stay," Goldie-Scot said.

One option the administration could pursue is to restore the 48C advanced energy manufacturing tax credits. Established as part of the American Recovery and Reinvestment Act of 2009, 48C offered companies a credit of up to 30% when they invested in new manufacturing facilities or expanded existing ones that made clean energy technologies.

Biden indicated in his "Build Back Better" campaign plan that he would establish new tax credits for manufacturing, but those have not been announced yet. Efforts in Congress to expand tax credits also have run into headwinds in the past.

As for tariffs on imported solar, the administration could consider making them "smarter" while avoiding hampering any companies already engaged in domestic manufacturing, said Georges Antoun, chief commercial officer of First Solar.

"We would support efforts to reform tariffs and boost their effectiveness," Antoun said in an email. "In fact, there’s a tremendous opportunity to make them more precise in their targeting of companies that benefit from unfair subsidies from the Chinese government even when they’re assembling their products outside of China."

While Biden is expected to introduce an infrastructure bill that could include initiatives to address both jobs and clean energy, both when it will be introduced and how clean energy manufacturing might be addressed remain open questions.

In the meantime, Sun of Wood Mackenzie said she is watching to see what the administration does next.

"The difficulty the solar industry is facing now with building up domestic capacity didn’t start with the solar industry," Sun said. "It’s just another example of the hollowing effect in the U.S. of domestic manufacturing. To reverse that takes a lot of effort."

Biden hasn’t said whether he’ll reform solar tariffs enacted by Trump, and a debate continues over their effectiveness.

In 2019, tariffs on solar parts and related components appeared to help spur some companies to "begin or expand production in the U.S.," according to the Solar Foundation’s job census.

"Over time, they have played a role in terms of bringing manufacturing jobs back to the U.S. in module assembly, and previously in solar cells, as well," Sun said.

Other analysts say the benefits of tariffs have been minimal at best, and solar companies have differing views on the issue. First Solar, which has two solar module manufacturing facilities in the United States and says it is considering building a third, maintains that the tariffs are crucial for helping domestic manufacturers compete with China.

But Silicon Valley-based SunPower Corp. says the tariffs have made manufacturing more difficult.

SunPower operates a solar panel manufacturing plant in Oregon that is set to cease operations next month, a decision made in part because of trade barriers, said Suzanne Leta, head of policy at the company. Facing revenue losses and increased production costs due to Trump-era tariffs and quotas on imported cells, SunPower decided to shift its business model to focus on downstream services, such as sales and installation, said Leta, who is also on the board of directors at the Solar Energy Industries Association.

"[The tariffs] were very challenging, but more importantly, there are no other incentives put in place that are direct incentives to spur U.S. manufacturing — things like tax credits for manufacturers, low-interest loans or a federal clean energy bank," Leta said. "There are so many tools in the toolbox that have not been used."

A longtime opponent of solar tariffs, SEIA doubled down on its position earlier this month, joining the American Clean Power Association and a consortium of renewable energy companies in urging the White House to repeal a Trump administration proclamation from last October that increased certain tariff rates and reimposed tariffs on bifacial solar panels.

The White House has yet to comment on the groups’ letter, which said tariffs enacted over the last four years have cost 62,000 jobs and slowed growth in the industry overall.

"Despite trade policy headwinds, America’s solar and wind industries today employ more than 300,000 individuals across all 50 states," the letter said. "We have merely scratched the surface of clean energy’s potential."

Correction: Georges Antoun is chief commercial officer at First Solar. An earlier version of this story contained an incorrect job title for Antoun.