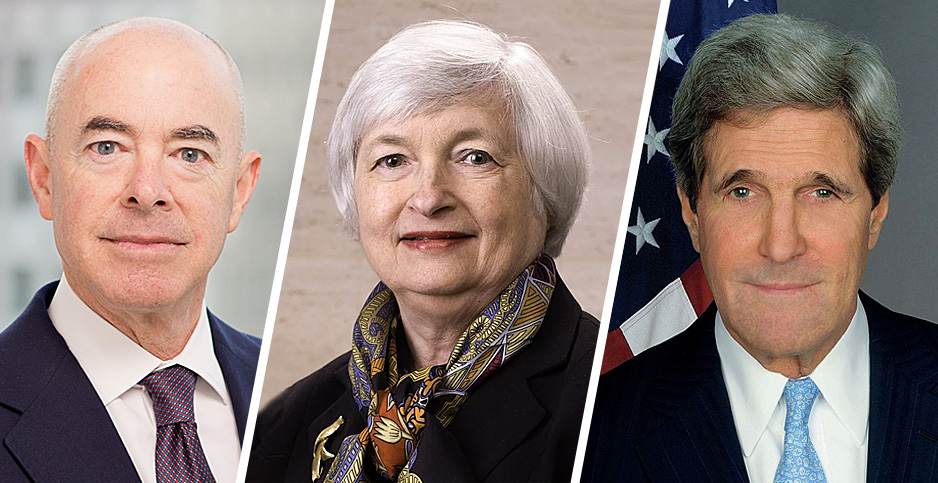 Although Biden is expected next month to name a domestic "climate czar" — a position designed to coordinate climate issues throughout federal agencies — the picks point to an administration already facing pressure to deliver on its sweeping campaign pledges, such as reaching 100% clean electricity over the next 15 years.

Biden, who also put forward Antony Blinken as his choice for secretary of State, said the team stands ready to "rally the world to take on our challenges like no other."

Jeff Navin, a senior Obama-era Department of Energy official, said Biden is making it clear that low-carbon energy and climate policy will be a priority across all major federal agencies.

"It makes sense that he’s thinking about international agreements, trade agreements and using diplomacy to push for deeper emissions reductions," Navin said. "I think it’s safe to say that climate is not merely in the purview of the Department of Energy and the Environmental Protection Agency."

The picks yesterday will touch on energy policy in various ways, from pressing foreign leaders on oil and gas projects to planning for cyberattacks against electric utilities.

Along with Yellen and Kerry, Biden announced the selection of Alejandro Mayorkas to lead the Department of Homeland Security, Avril Haines as director of national intelligence, Linda Thomas-Greenfield as U.S. ambassador to the United Nations and Jake Sullivan as national security adviser.

Most of the appointees are Obama-era veterans. Analysts with research firm ClearView Energy Partners LLC said in a note that they see the choice to go with experienced hands as Biden’s intent to make "rapid progress" on his climate- and energy-related foreign policy objectives.

Here’s how four of Biden’s choices for White House and Cabinet posts yesterday could change the energy sector:

If confirmed as the top Treasury official, Yellen could take steps to incorporate the risks of climate change across financial regulatory agencies — a move that could hit multiple energy sectors.

A distinguished fellow in the economic studies program at the Brookings Institution, Yellen became the first woman to serve as chair of the Federal Reserve in 2014, a role she held until 2018. She would also be the first woman to lead the Department of Treasury (Climatewire, Nov. 20).

Yellen penned a Wall Street Journal op-ed last year with other financial regulatory leaders, including two former Treasury secretaries, making the case for a carbon tax. More recently, she helped produce a report urging governments, financial companies and others to accelerate the transition to net-zero emissions. The report last month was produced by the Group of Thirty, an independent international body of economic and financial leaders.

As secretary, Yellen would chair the Financial Stability Oversight Council, a body established by the Dodd-Frank Wall Street Reform and Consumer Protection Act and tasked with identifying and monitoring risks facing the country’s financial system.

"Ms. Yellen … recognizes the importance of the Financial Stability Oversight Council (FSOC) in bringing the various financial regulatory agencies together to address systemic threats to our financial system, of which climate change is one," Lee Reiners, director of the Duke University School of Law’s Global Financial Markets Center, said in an email.

Yellen could vet appointees at various financial regulatory agencies to make sure they understood the financial risks posed by climate change and were committed to helping mitigate those risks, Mindy Lubber, CEO and president of the sustainability nonprofit Ceres, said in a statement.

In addition, Yellen could bring the U.S. into the Network for Greening the Financial System, said Steven Rothstein, managing director at Ceres. An international consortium of central banks and treasury departments committed to supporting the transition to a more sustainable economy, the NGFS currently only has one U.S. member, the New York Department of Financial Services.

"It would be important as one small but symbolic step for the U.S. to join," Rothstein said.

Some environmental groups expressed cautious optimism that Yellen would push to decrease use of coal and oil.

"We believe that Yellen is going to do the right thing, namely moving quickly to manage the decline of fossil fuels and deforestation-risk commodities in our economy and within the finance sector," Jenny Marienau Zimmer, 350 Action campaigns manager, said in a statement. "We are confident that in 2021, as far into the climate crisis as we are, Yellen knows we need a lot more than a carbon tax."

ClearView Energy Partners said in a note it views Blinken as a "steadfast Russia hawk, dating from his support for Ukraine sanctions and opposition to the Nord Stream 2 pipeline during the Obama administration." Nord Stream 2 has also drawn the ire of President Trump and Republican members of Congress (E&E Daily, June 30).

"Even if a divided Congress were to block legislative avenues to new strictures, Biden still could impose and enforce energy-related sanctions using statutory authorities that exist today," ClearView said, noting that a Republican Senate may not oppose new Russia sanctions laws.

Kerry, meanwhile, immediately is facing pressure from advocates on all sides of the political and industry spectrum after being announced as Biden’s climate envoy.

Brad Crabtree, director of the Carbon Capture Coalition, said yesterday that the group hopes Kerry will prioritize carbon capture as the United States and other countries strive to meet their respective midcentury climate goals, underscoring reports from the International Energy Agency and other groups deeming the technology a critical part of targets to reduce emissions.

"As a member of the National Security Council, Secretary Kerry will have the opportunity to help the U.S. build on its longstanding global leadership in the development and commercialization of carbon capture technologies," Crabtree said in a statement.

As secretary of State during the Obama administration, Kerry said carbon capture and storage is among the technology options available to address rising greenhouse gas emissions, including at the U.S.-China Strategic and Economic Dialogue in 2015 (Climatewire, June 24, 2015).

That year, Kerry also was at the center of the fight over the Keystone XL pipeline, recommending that the project was not in the national interest. In 2017, Trump signed a cross-border permit for the pipeline (Greenwire, March 24, 2017). Biden has vowed to rescind that permit.

Evergreen Action, the group led by former climate staffers for Washington Democratic Gov. Jay Inslee’s presidential campaign, lauded both Kerry and Blinken while suggesting a number of ways they could work internationally to combat climate change, including holding China accountable.

"The State Department must help ensure a productive bilateral relationship with China in limiting carbon pollution, and investing in research and development of cleaner and innovative energy technologies," the group said yesterday, offering five steps for the department.

It noted the department could also play a role confronting China’s investments in carbon-intensive infrastructure throughout the world and offer "meaningful direct investment and access to low cost financing to fund global deployment of clean, just and sustainable energy infrastructure."

Other environmentalists largely cheered Kerry’s appointment and said they hoped the longtime climate advocate would make it clear that rejoining the Paris Agreement that he helped broker would be just a first step.

"I served w/ Sec Kerry this summer on the Biden-Sanders taskforce & one thing is clear: he really does care about stopping climate change. That’s something we can work with," said Sunrise Movement Executive Director Varshini Prakash. "An encouraging move from the Biden team — now I’m keeping my eyes peeled for a domestic equivalent!"

One top priority is ending public finance for oil and gas through the Export-Import Bank and International Development Finance Corp., said Collin Rees, a senior campaigner at Oil Change International.

"We see a key role for Kerry in urging Japan and others to join the rest of the world in ending finance and export credits for coal, and in retaking the lead on the [Group of 20] and [Group of Seven] conversations on phasing out fossil fuel subsidies, as they’ve promised," Rees said, adding the group also wants to see "strong U.S. leadership in the International Energy Agency to make the new … scenario [of net-zero emissions by 2050] the central focus in future World Energy Outlooks."

Yet, Wenonah Hauter, executive director of Food & Water Action, slammed Kerry’s nomination and called it a clear indication that Biden "is not yet prepared or motivated to adequately address the climate crisis with the seriousness it requires."

Mike Sommers, president and CEO of the American Petroleum Institute, welcomed Kerry’s nomination and said the trade group looks forward to working with him to "tackle the challenge of climate change while delivering affordable, reliable and sustainable energy around the world."

A pick to protect the grid

Biden’s nominee to lead the Department of Homeland Security, Mayorkas, would bring a deep reservoir of cybersecurity experience to an agency that will face increasing threats to the grid by nations deemed a national security risk like Russia and China. The agency also is facing challenges from financially motivated hackers using ransomware against utilities and threats spurred by developing technologies such as electric vehicles and renewable energy.

If confirmed, Mayorkas would be the first Latino and immigrant to serve in the job.

As a deputy secretary at DHS under Obama, Mayorkas regularly met with members of the Electricity Subsector Coordinating Council, a group of electricity executives that coordinates with the federal government to respond to grid emergencies such as cyberattacks, said Suzanne Spaulding, a former DHS undersecretary.

Spaulding, who worked alongside Mayorkas during his tenure as deputy secretary from 2013 to 2016, said he was "involved in some of our most important work on cybersecurity."

Mayorkas led DHS’s negotiations of the 2015 cybersecurity agreement with Chinese President Xi Jinping to pledge that neither country would support or engage in theft of intellectual property. Cybersecurity experts say that China largely followed the agreement until relations soured under the Trump administration.

"This was done not just with a focus on espionage but with an eye on the potential for malicious cyberactivity that could impact critical infrastructure, including the electricity sector," Spaulding said.

Krayem said that Mayorkas would "need to focus on whether or not enough has been done in the sector, address systemic supply chain problems and assess the overall cyber posture of the energy sector, including the grid, pipelines, [oil and natural gas], and more."

Jim Cunningham, executive director for the grid advocacy group Protect Our Power, said electric utilities face millions of unsuccessful cyberattacks each day and that the new secretary will "face significant challenges in guiding us to a more resilient electric grid."

"We need comprehensive supply chain guidelines that are embraced by power companies and vendors alike," he added.

Cunningham said the next secretary should focus on increased collaboration among DHS, DOE, the Federal Energy Regulatory Commission and the National Association of Regulatory Utility Commissioners "to assure a coordinated, intelligent and timely approach to grid security."